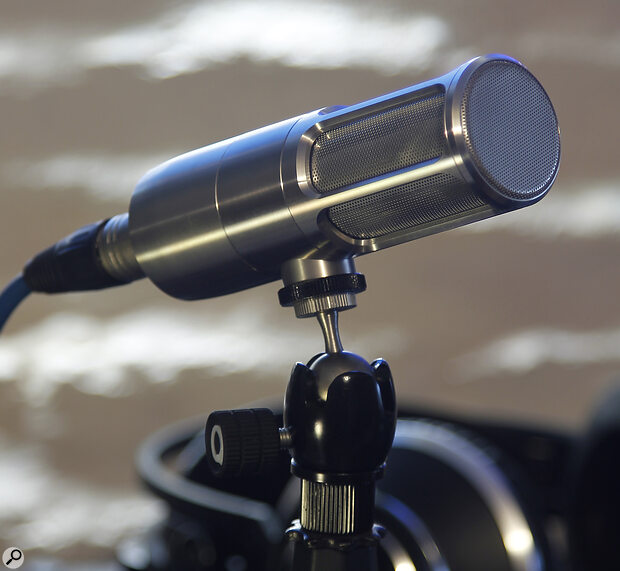 Earthworks throw their hat into the podcasting ring, with the chic and refined Icon Pro.

Lockdown has seen a boom in podcast consumption and production, and microphone brands of all hues have responded by releasing new models aimed at online content creators. Some have simply rebranded OEM mics as their own, others have taken their existing models and swapped XLR connectivity for a USB port, and a few have come up with brand‑new designs to appeal to vloggers, streamers and podcasters. In the latter camp are US company Earthworks, whose Icon Pro is designed specifically for the spoken word. A non‑Pro Icon, which connects via USB, incorporates a headphone amp and ships with a desktop stand, is also available, but for this review I was sent the phantom‑powered, XLR‑connecting Icon Pro.

Earthworks were founded in 1980 by the late David Blackmer (the man behind dbx), and all of their products — from the long‑discontinued Sigma monitors to their current microphones and preamps — have one thing in common: extended high‑frequency bandwidth, often reaching way up into ultrasonic territory.

Almost since gaining the ability to measure audio frequencies, there’s been considerable debate about whether humans can hear frequencies higher than 20kHz, but ultrasonic sound isn’t actually the focus of Blackmer’s thinking or Earthworks’ products. Instead, the motivation is all about optimising performance in the time domain — the ability to resolve audio transients accurately and with precision. But for any diaphragm, be it in a microphone or a loudspeaker, to be able to capture or reproduce transients faithfully, it has to be able to move and stop extremely quickly — and it’s that ability that also, inevitably, gives rise to an extended HF bandwidth. So the ultrasonic aspect, while often attracting all the attention, is actually a side‑effect of the real plan: superb time‑domain performance. However, there’s no simple way to denote time‑domain accuracy in the product specifications and, accordingly, the Icon Pro’s frequency response is the only clue. A response chart on Earthworks’ website shows the Icon Pro to have a flat response almost to 30kHz, at which point it starts to roll off very slowly. Other specs include a sensitivity of 20mV/Pa, self‑noise of 16dB A‑weighted, and a maximum SPL of 139dB.

As well as setting Earthworks apart from the majority of microphone manufacturers, this fast transient response and extended HF sensitivity also sets the Icon Pro apart from some of the more established voice‑over and radio mics. Probably the two biggest names in the spoken‑word microphone market are the Shure SM7B and Electro‑Voice RE20, both of which are moving‑coil designs. Relative to the Earthworks, with its lightweight, small‑diaphragm (12mm), pre‑polarised capsule, the Shure and E‑V diaphragms are massive, which means they’re slower to move and will have an inherently curtailed transient and HF response. On the one hand, this is likely to result in less‑than‑faithful capture of sibilants and fricatives; on the other, they’ll be much less susceptible to undesired HF sounds like paper shuffles.

I didn’t have access to an SM7B or RE20 for this review, but I did have a Sontronics Podcast Pro handy, as well as a Sony ECM‑100U. The Sontronics is a good example of a dynamic mic designed for spoken word, with a HF response that starts to drop off at around 15kHz. And though the Sony is not at all aimed at podcasters, it is part of Sony’s premium ‘High Resolution’ range, and has a frequency response extending all the way up to 50kHz. But before I get onto comparisons...

When I first took Earthworks’ new Icon Pro microphone out of its box, I was immediately impressed. Its stainless‑steel body and drilled metal grille are classy, and with a hefty weight of 700g it feels like a mic that’s built to last. Frankly, it looks stunning, and with video being an ever more important part of home‑produced content, aesthetics matter. The ‘energy drink’ look of some budget gaming and streaming equipment has become something of a cliché, and while it might hold appeal to younger Twitch viewers, content creators with a more mature audience will probably want to be seen using serious‑looking kit. They certainly won’t be disappointed with the Icon Pro.

As well as the mic itself, the box includes a Triad Orbit M2‑R: a ball‑and‑socket mic attachment that fits onto a standard 5/8‑inch mic‑stand thread, and onto which you screw the Icon Pro (shown in the main photo). This, too, is very pleasingly engineered, and lets you point the mic at pretty much any angle you might conceivably need, whether you’re using a desktop mic stand, a floor stand or a boom arm.

I set the Icon Pro up on a desktop stand, and positioning it was easy thanks to the Triad Orbit mount. I eventually settled on a miking distance of around 6‑8 inches, in the process discovering that the Icon Pro exhibits only a fairly gentle proximity effect, and that it has a pretty wide pickup pattern for a cardioid mic.

The sound I got was very well balanced, with a pleasing combination of low‑end weight and high‑end detail. Despite the highs being very much ‘there’, though, they are far from overly present, so unlike some cheaper small‑diaphragm capacitor mics, the sense of detail wasn’t accompanied by any brashness or fizz — the sound was simply very lifelike and ‘focussed’, for want of a better word. And though it is a fairly bright mic, sibilance was never a problem. Popping only really became an issue when I used the mic closer than 2‑3 inches, at which point both plosives and breath noises started to make themselves known.

The sound I got was very well balanced, with a pleasing combination of low‑end weight and high‑end detail.

The same couldn’t be said of the Sony ECM‑100U, which would pop and blast at the slightest provocation. That isn’t a very fair comparison, because the Sony mic really isn’t designed for close‑miking of speech — there’s precious little between the capsule and the outside world, unlike the Icon Pro, with its grille that essentially works as a pop filter. In other respects, though, the two sounded quite similar. Both exhibited the analytical sound you expect from a good‑quality small capacitor capsule, with a very detailed high end.

Comparisons with the Sontronics mic were rather more interesting. The sound of a dynamic microphone being spoken into at close range is the sound of radio — the proximity effect lends voices authority, while the curtailed highs mean less pickup of extraneous noises like rubbing clothes, lip smacks, breath noises and general fidgeting. The effect is an intimate, almost claustrophobic sound, and that’s something that the Sontronics Podcast Pro does very well. Podcasters seem to favour that kind of sound too (Seth Rogen and Michael Rappaport both use a Shure SM7B), but perhaps because visual media add quite a lot of context to the speaker, vloggers and streamers tend, in my experience, to favour a brighter, more open sound. This makes sense: if you can see a speaker scratch his beard or sip her coffee, hearing those sounds isn’t going to be jarring, as it might be if you were listening to an audio‑only stream.

For that kind of sound, the Icon Pro works extremely well. Intelligibility is excellent, the sound is detailed without being harsh, and the fact that it works well at a slightly greater distance than typical radio mics arguably makes it more useful for video work. The fact that it looks gorgeous also doesn’t hurt!

So, the Icon Pro isn’t a traditional radio microphone. Even when used up‑close, and with a pop filter, there’s too much HF detail (from both the speaker and their surroundings) and not enough proximity effect for it to do ‘that thing’. However, for us studio‑dwellers, it’s potentially something much more useful: a high‑quality small‑diaphragm capacitor microphone, with applications in any situation where you’d normally reach for a pencil mic. I tried it on some shakers, as well as acoustic guitar and double bass, and the results were very good indeed. If the relatively high price for a ‘podcast microphone’ is all that’s putting you off, the fact that it works well on instruments too may seal the deal.

The Icon Pro is a beautiful mic to look at and listen to. Well suited to vloggers and streamers, it also has much to offer in the studio.