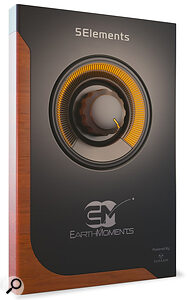 Hosted by either the free player or the full version of NI’s Kontakt, 5Elements utilises almost 6GB of samples sourced from a selection of handmade Indian Instruments, but you won’t find any sitars, tamburas or tablas here. These unique instruments were designed and built by Aurelio C Hammer, musicologist and founder of Svaram, whose instruments incorporate different natural metals, woods and types of stone.

The 5Elements name relates to the five elements of Earth, Water, Fire, Wind and Space. I’ll get on to the instruments themselves in a moment but the essence of 5Elements, which comes with both chromatically tuned and original pitch versions of the recordings, is that two main instrument sound sources may be combined and then layered with player noises and ambient sounds, such as forest birds, sea, rain or workshop noises, with a further option to blend in one of several binaural beat drones — don’t ask, unless you are into relaxation music that tastes of lentils! There’s also the option to add reverb, EQ and compression.

All but one of the instruments offer a choice of playing methods such as sticks, mallets and so on, and the two instruments of your choice are combined and then blended using the large dial that dominates the GUI. The More buttons may then be used to access further adjustments for the individual instruments such as instrument tunings, tonality and reverb.

While there may appear to be few sound sources and little in the way of velocity layering, up to five different playing modes per instrument plus the ability to combine sources allows for a wide range of inspirational sounds that evolve in tonality... Just wonderful.

The Ananda is a box‑like instrument with 12 playing strings on top and 36 resonant strings underneath, and it sounds a bit like a cross between a tambura and a dulcimer. Golden Plates are essentially tuned square metal bells hanging in a frame, producing lots of overtones, while Healing Bed resembles a piano‑sized dulcimer with 50 strings and a custom resonator. The Litophone is akin to a Xylophone made from granite while the Octave Tubes are tuned tubular bells hung horizontally in a suspended frame that can be spun to add modulation.

Silver Plate is a large, square metal gong, but my favourite from this collection has to be the Singing Stone, a 200kg block of stone cut with slots to make it look like a giant heatsink. The fins are then played by rubbing in a similar way to wine glasses — pure magic. And, as Mike Oldfield once said — tubular bells. Even the reverbs, which are based on Impulse Responses, offer a choice of conventional studio favourites, Caves or Specials cooked up by the design team.

While there may appear to be few sound sources and little in the way of velocity layering, up to five different playing modes per instrument plus the ability to combine sources allows for a wide range of inspirational sounds that evolve in tonality and include shifting overtones, scrapes or other organic components. Even the tuned bells sound deliciously exotic. There are playable versions of each instrument but also a selection of short phrases that would slot nicely into cinematic or ambient music compositions. Just wonderful.