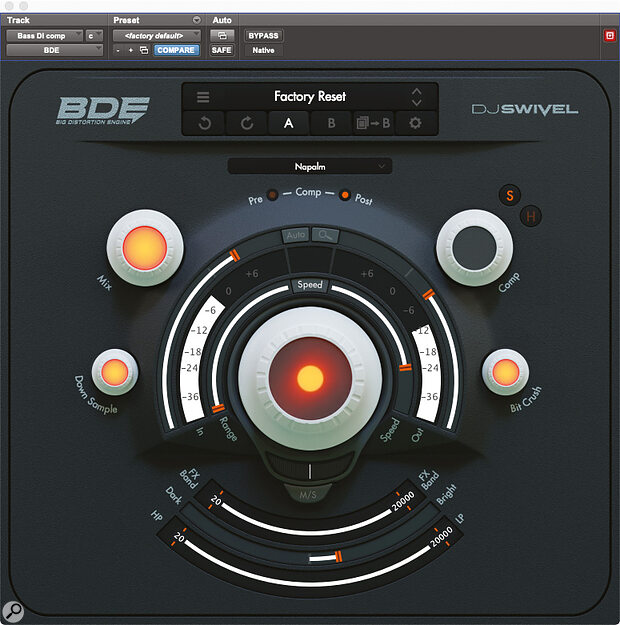 BDE, or Big Distortion Engine for long, is the second plug‑in from producer and engineer Jordan Swift. Better known as DJ Swivel, Jordan is not one of those celebrity mixers who slaps his name onto anything going so, as with his previous offering The Sauce, BDE has been developed by his own team to his own specifications.

The GUI looks clean and simple, but packs in quite a few more controls than is apparent at first sight. Like Heavyocity’s Punish, it’s based around a central ‘magic eye’ control that grows redder and angrier as you crank it up. In this case, the central control governs the Drive of the selected saturation algorithm. There are six of these, with names ranging from Cherry Bomb to Nuke to reflect the level of sonic destruction on offer.

What emerges from the saturation algorithm also depends on several other parameters. Two sliders labelled FX Band allow you to set upper and lower frequency bounds, outside of which the signal is not distorted. This is great when, for example, you want to add some midrange attitude without turning the low end boomy or introducing high‑frequency fizz. It’s also possible to fine‑tune the amount of saturation by varying the input gain. There’s a Detect function that can analyse the input signal and set the gain parameters appropriately, and the input and output gain controls can optionally be linked so that a constant output level is maintained.

Conventional saturation isn’t the only trick up BDE’s sleeve. Three further ‘magic eye’ controls bear the self‑explanatory labels Down Sample, Bit Crush and Comp[ression]. The first two do exactly what you’d expect, while the Comp knob is actually a wet/dry balance control that introduces preset compression in parallel. The compressor can be switched pre‑ or post‑distortion in the signal chain and set to soft‑ or hard‑knee operation.

Less obvious are the Speed and Range sliders, which allow you to manipulate the temporal and dynamic qualities of the saturation in ways I haven’t come across before. Engaging Speed and pushing up the slider seems, in effect, to delay the envelope of the saturation compared with that of the actual signal, which can produce interesting effects on percussive sources. Lowering the Range control, meanwhile, gets around the situation whereby loud peaks are obliterated and quiet moments left unscathed; the lower the setting, the more evenly the saturation is applied to loud and quiet sections alike. The plug‑in also has a global Mix control, high/low‑pass filters and a neat Mid‑Sides slider which lets you apply saturation unequally to the sum and difference components of the signal. Another slider adjusts a parameter called Colour, which is a post‑saturation ‘tilt EQ’; this is a nicely judged way of making the overall tonality warmer or brighter to taste.

At first sight, it would be easy to write off BDE as a minor variant on existing plug‑ins such as the aforementioned Punish, SoundToys’ Decapitator, FabFilter’s Saturn, Softube’s Harmonics and so on. It does have much in common with those effects, but it also brings some new ideas to the party. For example, weighting the distortion towards the Sides signal proves a surprisingly effective way of adding natural‑sounding stereo width to something like a drum kit recording, even if you’re not obviously brutalising it for effect. The Speed and Range controls also make possible some unusual results. Turning the Range control all the way down allows a tonally consistent saturation to be applied to even the most dynamic instrumental part, while long Speed settings can introduce an interesting slow ‘bloom’ to the distortion.

It’s not intended to mimic guitar or bass amps but, other than that, BDE runs the full gamut of saturation, from ‘barely there’ thickening to brutal fuzz, crunch and other evildoing. Most importantly, it does so in a very user‑friendly way. Whether you’re searching for subtle warmth or extreme sonic violence, BDE’s interface makes it straightforward to get the results you want quickly, and at the price its novel features make it worth investigating even if you already have other saturation plug‑ins to call on.

A slick and effective saturation plug-in with some unusual features.