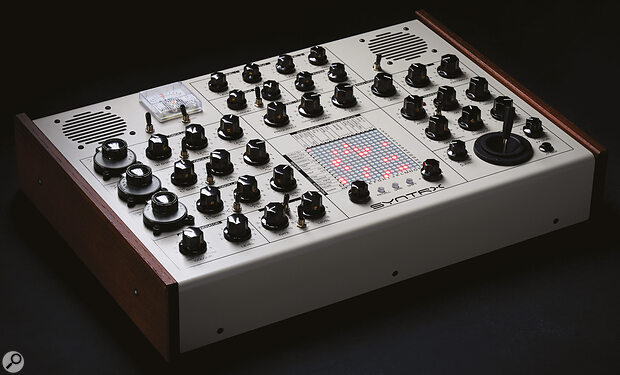 The Syntrx is not a clone, but its inspiration is clear. Can it recapture the spirit of the legendary EMS Synthi?

It’s a fact — the EMS VCS 3 and its portable cousin the Synthi AKS are among the most revered synthesizers ever built. Released at the tail end of the 1960s, the Synthi was quickly adopted by progressive musicians like Brian Eno, Pink Floyd, Jean‑Michel Jarre, Hawkwind and Tangerine Dream. Its unconventional interface and distinctive pin‑matrix patching system encouraged experimentation, resulting in an exotic, ‘far out’ sound.

The Syntrx wears its inspiration proudly but it is not a clone. No part of the circuitry is copied from EMS’s schematics, it’s all been newly developed by Erica Synths themselves. On the other hand, the choice of modules, the front panel layout, the pin matrix (albeit now 100‑percent digital), the parameter naming, the joystick, the VU meter, speakers and even the name, mimic the EMS designs. Erica Synths want to give you as close to the experience of an EMS Synthi as possible without entering the murky and contentious waters of cloning. The question is can the Syntrx keep the magic alive without the EMS engine firing under the hood?

The Syntrx, and the Synthi before it, are semi‑modular analogue monosynths. There are three oscillators (the third works at lower frequencies for LFO duties), noise generator, ring modulator, low‑pass filter, two input amplifiers and a spring reverb. For modulation sources, there’s a trapezoid envelope generator, sample and hold module and the joystick. The sample and hold circuit, along with oscillator sync, a gate input and of course MIDI, was not something that featured on the Synthi, although they could all be done, and often were, with skilled modification. 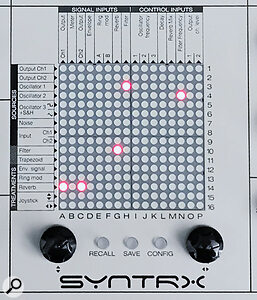 The digital pin matrix.All modules are logically laid out on the front panel and in the middle, impossible to miss, is the pin matrix. I call it a ‘pin’ matrix, but the resistive pins used by the Synthi are gone. Instead a grid of LEDs replaces the pin‑holes and two endless encoders are used to move around the matrix like an Etch‑A‑Sketch. On the vertical axis are sources and on the horizontal axis, destinations. Line up the intersection between a source and a destination, and click the encoder to insert a virtual pin. In the Synthi, each pin had a resistor soldered within it. Different coloured pins used different resistors to vary the amount of signal that was passed from source to destination. The Syntrx emulates this with successive pushes of the encoder, the brightness of the LED dimming with each click indicating the level of signal being passed through.

The digital nature of the matrix opens up the opportunity for patch storage and although it’s not possible to store the values of the parameters themselves, you can store up to 256 matrix patches (one for each slot in the matrix). This is useful for storing templates. For example, one might store the basic routing for a simple monosynth (oscillators > filter > amp) to use as a starting point. Or perhaps a template to route the two external inputs through the ring modulator then into the spring reverb....