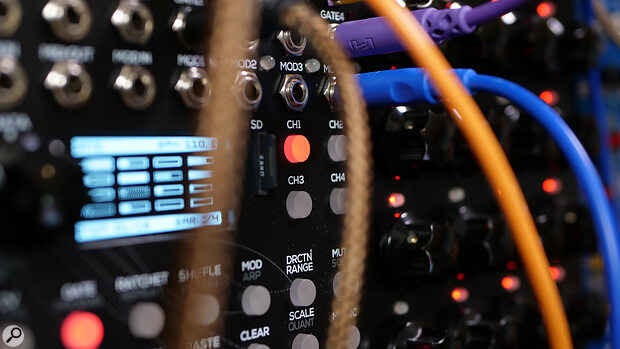 I didn’t appreciate the awesome power of gates until I finally got round to building a modular synthesizer. At first I used it as a giant MIDI instrument, but there was something missing. Then it struck me. What if I separated the amplitude and filter gates from each other, and divorced them from the control voltages, and fed different patterns into each gate?

I realised that with a gate I could turn a single note into a bassline, or angel trumpets and devil trombones into sparkles. Gates are one of the key things that separate modular synthesizers from their compact keyboard brethren. They’re simple, but endlessly flexible.

When did I first become aware of gates? Cast your mind back to the early 1990s, and the best band around was The Shamen. For a bright shining moment they were hip, and ‘Move Any Mountain’ was their apotheosis. The bass line in particular. It sounds like a guitar put through a tremolo pedal, a kind of chugging staccato noise. I wondered how they did it. From what little I could understand from music magazines at the time, it had something to do with hi‑hats.

And gates. Hi‑hats and gates. As a kid I knew nothing about noise gates and side‑chaining, but the idea of gating a signal planted a seed in my mind. What if you could separate the sound of a note from the timing? What if you could feed the output of one instrument — a violin, or a guitar — into a synthesizer, and trigger the filter with a drum pattern? Most modern sequencers have some form of MIDI gate, notably Cubase, which has had one for ages. Sound On Sound wrote extensively about it back in 2007 (www.soundonsound.com/techniques/creating-rhythmic-effects-midi-gate) but I had always mentally filed MIDI gates into the same murky section of DAW lore as phrase sequencers and MIDI parameter transformation. Here be dragons.

What if you could separate the sound of a note from the timing? What if you could feed the output of one instrument — a violin, or a guitar — into a synthesizer, and trigger the filter with a drum pattern?

But modular synthesis forces gates on you. In a nice way, because you have to get to grips with them in order to build a patch. Most of the classic analogue synths of the 1970s had some form of external input, but they tended to have a single gate for the filter and amplitude envelope, which is fine if all you want to do is stutter an external signal. Modular synthesizers on the other hand have gates up the wazoo, and there’s a wide range of modules devoted to processing them, ranging from simple logic circuits and gate dividers to the likes of Make Noise’s Maths and Pamela’s Workout. In fact when I think of modular synthesis I think of the stuttery, ratcheted sound of gated sequencer lines, not electronic trumpets.

On a prosaic level Maths and the like can churn out automatic hi‑hat lines. But without the idea of splitting sound events into separate note values and timing data, I and countless others would never have considered building a modular synthesizer. And without modular our lives would be incomplete. We would have food and heating, but our lives would be incomplete, were it not for gates, and the love of gates.