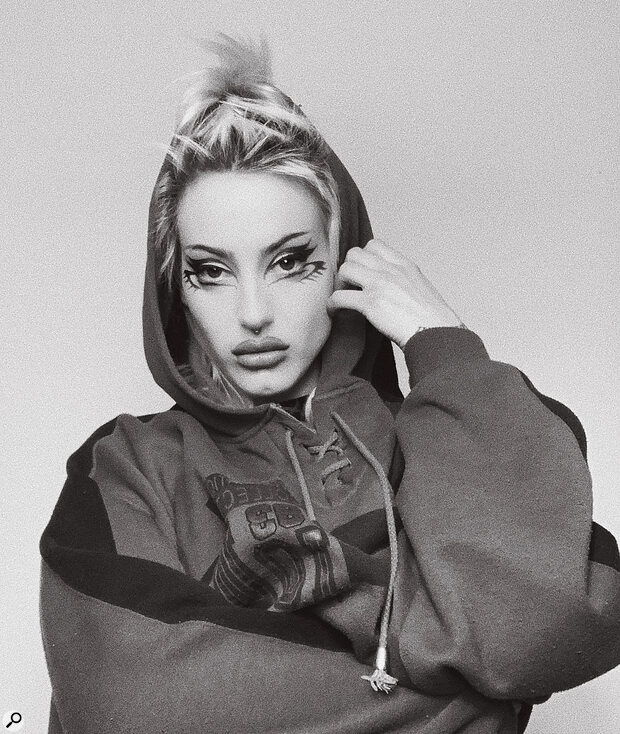 Newcastle‑based singer and producer Beth Jeans Houghton aka Du Blonde recently released her third album Homecoming. Completely self‑produced, it boasts appearances from Andy Bell of Ride, Garbage’s Shirley Manson and Ezra Furman. Houghton has lately also found herself at the centre of a much‑needed discussion about mental health in music after speaking openly about her Tourette’s Syndrome. “You’re OK if I tic, aren’t you?” she asks. “I’m really pleased to see how much mental health has become more of a conversation, and how people are realising it’s just as valid as any physical issue. I jerk my neck back and flip the bird quite a lot. That one’s quite common with people with Tourette’s. I have a friend who calls those tics the ‘greatest hits’!”

At the moment it’s my EP that I’m making, but that’s an awful answer! Actually, what I’m listening to a load is Elisabeth Elektra — an amazing queer synth‑pop musician. We’ve made a band which is going to be like, synth‑pop‑metal. She has an album called Mercurial which is just full of bangers. I’d totally recommend that to anybody. I’ve been listening to it a lot recently. The band name might just be ‘Du Blonde and Elisabeth Elektra’. I always like to have band names, though. I have a bunch of side‑project bands. I have a glam metal band called Fuck Demon.

I think Homecoming. It’s the first time I did everything myself, start to finish. And ended up with something that I didn’t hate! It’s changed the way I’ll make music forever, really. Now I don’t have to worry about finding the right person to produce something. And I’ve had quite a few bad experiences with producers, so it meant I was perpetually going into recording sessions half stressed that it would sound shit, and half stressed that the person would be a dick… I’d always start the recording process from a place of anxiety, whereas now I’m starting it from a place of excitement and joy. So, I think I’ll just do that forever! I always wanted it to sound very raw and lo‑fi — not as in quiet or badly recorded, but raw and full. The earlier albums ended up sounding a little more like pop production on a rock record, which I don’t think served me well when I turned into Du Blonde.

I’m looking for what guitars they have. I just love guitars. Some of the weirdest guitars I’ve ever found have been in studios. I did a test run kind of production with Youth once and he had this amazing 12‑string Gibson SG. And I was playing it saying, “This is great! I want one! How much is one of these?” and he said, “Well… It’s one of three.” I was like, “Oh.” At the moment I play a red Fender Strat Custom Shop. It’s amazing, I didn’t really know what Custom Shop Strats were — why they were so special and why they’re so expensive — until I played this one. I was like, “Holy fuck!” All the hand‑wiring and stuff. I’m a Strat person in general. I’ve got like, 16 electric guitars. So, a collection. But I always go back to Strats.

Another thing I look for, whether I’m working with an engineer or a producer, is someone who is not patronising. One of the best producers I’ve ever worked with was Ben Hillier, who produced my first record. A really great producer, but also great in the sense that anything I asked him he would tell me in simple terms. I was 18 and ended up learning so much from him because I’d be asking questions like “What is EQ?” or “What does this button do?” And he’d just happily tell me, whereas I’ve worked with other people who are just like, “Oh, don’t worry about that,” or they say, “Just trust me.” That kind of thing.

Du Blonde: There’s a lot of gatekeeping in the industry… Like, ‘I’ll help you do this but I’m not going to tell you how to do it, so that you’ll always need me,’ kind of thing.

It’s difficult: I feel like I should say someone who’s a musician, but actually this guy Brad I work with, who works with me on my album releases, has taught me the most about self‑releasing and being self‑sufficient. Things that can give you a lot of freedom. I don’t know, I’ve had so many musical mentors throughout my life — Shirley Mason had a big impact on how I navigated my stress with the industry. She’s very boisterous and doesn’t take any shit. She was there for me a lot when I was going through that stuff, reminding me not to get gaslighted. There’s a lot of gatekeeping in the industry… Like, “I’ll help you do this but I’m not going to tell you how to do it, so that you’ll always need me,” kind of thing. People should help each other out a lot more.

OK, so I think this varies. Having conversations with multiple people and multiple producers, none of them think it’s the same job. Some artists need someone to come in and shape their music to be something else. And that’s totally valid and fine, but with a lot of the producers I’ve met or worked with there’s this idea that they have to take your music and make it sound like them. Which I’ve struggled with, because I was producing music when I was 16 and doing all the arrangements and everything, and suddenly I was thrown into this industry where it was like, “No, I think you should do this…” — even taking a major song and changing it to a minor song. And I’m thinking, “This is not what I wrote.” I so strongly believe that it should sound exactly like the musician wants it to sound. You could have a producer who’s a legend, but the legend might be wrong for you. I think a lot of decisions in people’s music careers are based on, “Ah it’s so cool I worked with this person!” But if the album isn’t right when it’s done, was it worth it just to say you worked with that person?

Mine would be ‘Say It Ain’t So’ by Weezer. The production on that album… I love rock music in general, but I’m further away from the reverb‑y U2, Kings Of Leon side of things, with one note over and over in the background. With Weezer you can hear each instrument very clearly. There’s a lot of overdrive but a lot of space. Also, ‘Don’t Fear The Reaper’ by Blue Oyster Cult. I love how that song turns into some bizarro classical metal solo — as if it’s skipped onto a random playlist — and then it just comes back in.

Ooh… My little Scarlett Focusrite 2i2 interface. It just does me well. It’s super simple, I know how it works and I can record anything on it.

This is hard, because… In fact, can I create a new one? So, the Fender Lead guitar that they came out with a couple of years ago; they had one which I think had humbuckers, which was purple, and then they had one which was green which had standard single‑coils. Well, I would make the first one, but green! I’ve been wanting to buy this guitar forever, but I don’t want a purple guitar! And I really want a slime green guitar! But I can’t spend that money on it when I know the other one would sound better for my purposes. Maybe I should just buy it and get it repainted. I want to get the Custom Shop one I have painted, but I’m too scared.

Ty Segall. I have met him before, although I was actually standing next to someone he knew while they were having a conversation. And they just said, “This is Beth!” So, no. Actually I haven’t met him. He just puts out anything, which I love, and — I don’t want to get all psychoanalytical — he doesn’t seem to care whether people will like it or not, or whether it’s ‘consumable’ or not. His output is nuts, and that’s the output I’d like to have. I was thinking in advance about the conversation you and I were going to have, and was wondering how I even feel about the idea of production. It can hold a lot of artists back from putting records out because they can’t afford a producer, or they’re just not in that place yet. For me, if someone’s making good music, I would rather hear a terribly recorded version on Bandcamp than never hear it at all.