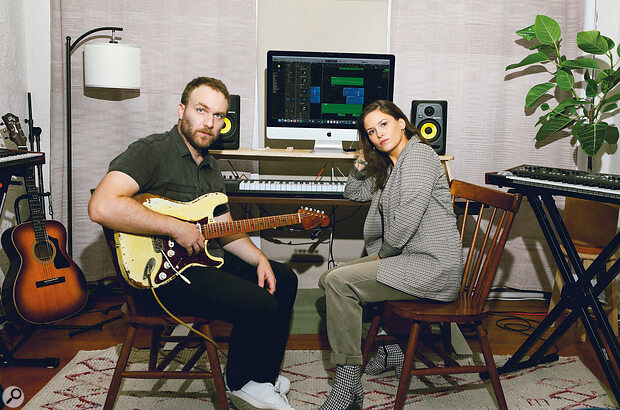 Composers Michelle Birsky and Kevin Henthorn speak to us from their studio space in Los Angeles, where they spend most of their working hours. With a musical vocabulary ranging from fragile post‑classical melodies to collaged soundscapes of vocal tones and found sounds, the duo’s developmental years as artists in New York City’s indie scene provided a rich precedent for their eventual foray into the world of film composition and their relocation to the West Coast, where they have built a substantial reputation.

As well as working in a partnership, Kevin and Michelle are a couple. They made their debut with the score for indie film Asking For It in 2019, and their breakthrough came with the haunting soundtrack for Miramax’s broodingly beautiful feature film Mother/Android, a post‑apocalyptic drama starring Chloë Grace Moritz that took Netflix by storm upon its release in December of last year. “It coincided well with us moving out to LA,” explains Kevin. “One of my best friends from film school, Mattson Tomlin, was directing a movie called Mother/Android. He loosely said he might consider us for the soundtrack but I didn’t really believe him. I ended up getting the script from him and we wrote something like 19 cues. We just pitched it to him and that’s how we got the gig. That’s how I made the switch — everything just clicked. It was like, ‘Oh! I love doing this! This just makes sense!”’

Kevin reflects on the difference between playing as standalone artists and composing for film: “You do whatever the scene needs,” he says.

“That’s why I love it,” Michelle adds. “You don’t need to stick with your genre. It’s about the scene, it’s not about you. It frees people — especially artists with existing careers. It allows them to experiment.”

Kevin: For me, it’s a band called Coco, who are local here. Their new album is amazing. I’m obsessed with it. It’s kind of retro, ’60s vibes. They’re all incredibly talented musicians.

Michelle: I’ve been listening to Adrianne Lenker quite a bit. Her album that came out last year, called songs. It has a Part A, which is all songs with vocals, and Part B which is all instrumentals. We have the record and I’ve just been playing it. A lot.

Kevin: Definitely the soundtrack for Mother/Android.

Michelle: I think the most interesting thing about that process is that we were pushed in a certain direction, but it was definitely the direction that we wanted to go in — which was to really make it sound organic. Instead of a big action film, where you’re scoring action, we were scoring the story of the main characters and the intimacy of their relationship. To do that we used a lot of acoustic sounds, a lot of found sounds, a lot of our voices... just to make it as human as possible. Doing that was so much fun, because it involved a lot of vocal sampling — which is like, my favourite thing! And a lot of guitar, which is [Kevin’s] favourite thing! We were finding sounds in our kitchen, banging on pots and pans and sampling those. It wasn’t a super tech‑heavy project, in that regard. We obviously then use technology to turn those sounds into music... But I think that was my favourite part of doing it. Finding and recording the organic sounds and then manipulating them.

Kevin: Yeah, Mattson really wanted it to sound like two people in a room with pots and pans. That’s what he told us. We really took that literally and just went with it! But I think some of my favourite moments were just about taking a stream of consciousness. One‑takes of stuff. I did a lot of bowed acoustic guitar — there was a five‑minute take that we had recorded as a demo, and that turned into three cues! I never had to play that line again, because with bowed acoustic it’s really hard to get the same exact overtone twice. So sometimes it just worked. A lot of magic happened in writing this. We just rolled with it.

Kevin: Good atmosphere. I’m not much of a tech‑y person. So I feel like atmosphere is everything — especially as an artist, even in a band project setting. If I’m not comfortable and happy in the studio it’s going to be hard to be creative.

Michelle: For me, the first thing I gravitate towards is a microphone, because that’s usually how I find the sound. The music that I’m looking to create comes through singing or playing a piano‑ very simple! Our home studio is where we did almost everything for this film. And it’s not got a ton of gear. It’s the place where we write the music, create the thing... and then if we need to expand on that, we go somewhere else.

Michelle: Neither of us have specific musical mentors, but I feel like I have a lot of people who have become mentors to me, especially recently. I did the SCL, the Society for Composers and Lyricists mentorship programme, in 2020, led by [Emmy‑nominated film score composer] Cindy O’Connor. She brought in some amazing people to speak to us in a panel format every Monday, and it was like getting a free education in the world of film music! We had lawyers come and speak to us, music contractors, other composers... That was how I got my first look into the world of film music, into how the industry works.

Michelle: I think I think this applies to both producers and composers, which usually are one and the same. It’s the idea that the job is only creative. That it’s just constant creativity. And it is a creative job, but there’s also a lot of file management and a lot of technical work that needs to be done. A lot of organisation. There are a lot of elements to it that are just not as fun as the creative. So I think that’s a misconception: that it’s just about making music all the time. Super fun and chill, right!?

Kevin: It’s interesting, since I was 18 I’ve worked with the same producer on every album. His name’s Ariel Loh. He actually mixed the soundtrack for Mother/Android. I think trust is something that’s so underrated. Like, it takes me years to build up trust with someone. And at this point, it’s so collaborative. We just trust each other, 100 percent. And I feel like that’s also what we have working together as composers.

Michelle: With reference tracks for film it really depends on the project and what the director is looking for. But I guess, my go‑to, in terms of the kind of thing I would like to be working on all the time, is the soundtrack for The Social Network by Trent Reznor and Atticus Ross. That is like the soundtrack that made me want to be a film composer, because it was something completely different than anything I’d ever heard before. So yeah, that’s one of my favourite scores, but also a score that I would love to reference.

Kevin: Again, it’s not one track, but the There Will Be Blood soundtrack is incredibly informative for me because it’s just amazing. I think the opening cue was an existing Jonny Greenwood track, which PT Anderson heard and wanted to use. And that’s how they started working together.

Kevin: The Violet Amethyst mic. Violet split off from Blue a while ago, I think. It’s the best mic for me, for my voice, that I’ve ever used. I think I use it on every single thing.

Michelle: I would choose the Kilohearts vocal processing tools. We use the pitcher a lot, but any of the Kilohearts tools that we’ve used to mess with vocals. We would also need a computer in this scenario!

Kevin Henthorn: Atmosphere is everything... If I’m not comfortable and happy in the studio it’s going to be hard to be creative.

Kevin: Probably just, like, the original [Roland] Juno 6. If I could just do that exactly. That would be great, because prices are insane! It’s an amazing synth. It’s kind of similar to how I feel about the Violet Amethyst. I feel like I end up using it on almost everything. There’s so much you can do with it. It’s just my favourite synth.

Michelle: It’s like not even the best instrument, but it would be the Korg Delta. I had this synth for a long time. I bought it from a friend, and then I broke it. I literally dropped it, and it shattered into a million pieces. And it was devastating. And I want it back [laughs]!

Kevin: I mean, if they could make it smaller, that would be great…

Michelle: I used to cart it around to gigs on the subway. It weighed like, 80 pounds. OK, maybe not... But close! It had the best synth string pad sounds.

Kevin: For me, it’s Jon Brion. He’s amazing. When he did Mac Miller’s album, that was awesome. Just, everything he does. Everything he touches is gold.

Michelle: [To Kevin] You go first.

Kevin: Make friends, make more friends and keep making friends. And work with those friends. Don’t get hung up on trying to work with people who are ‘bigger’ than you, on working with someone who is unobtainable to you at that time. Just work with friends, because you’ll all grow up, people will start doing cool shit and that’s how you’ll end up getting all your kicks anyway!

Michelle: That’s a better answer than mine [laughs]! Mine would be to set goals for yourself. But to let those goals be loose. I was dead focused on becoming an indie‑rock person, a synth‑pop person. On doing the band thing. It was great that I did that and it helped me to develop a sound, but had I had a little more foresight I would have realised the picture was broader than I ever thought it could be at the time.