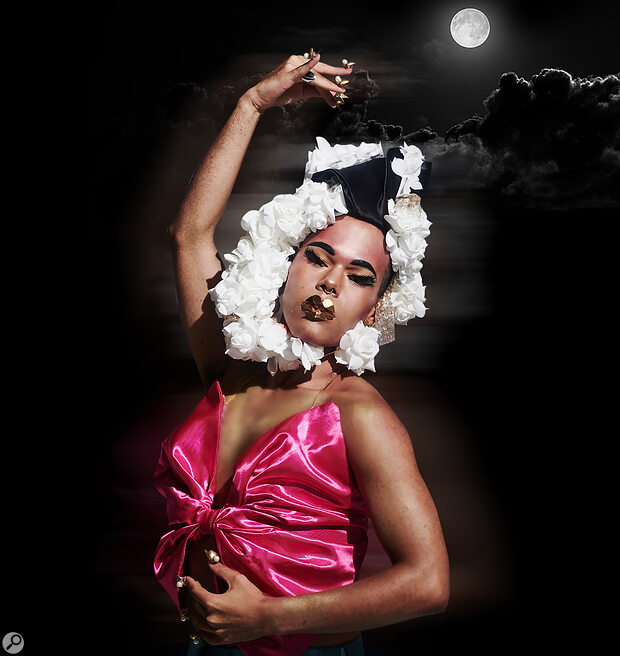 From South Africa’s Design Indaba to the Berlin Biennale, South African artist and producer Angel‑Ho creates joyous and very danceable music. Combining synths, samplers, Afrobeat influences and pop sensibilities, recent EPs I Wanna See You Vogue, Queen Of Queens and Silent Plateau followed 2021’s enthusiastically received third album A Time To Die, and Angel is currently working with Tunisian multi‑instrumentalist and songwriter Emel Mathlouthi. “I’ve never been complacent or content to stagnate in one space,” Angel‑Ho says, speaking from their base in Cape Town. “My music is about generating and conjuring positiveness; about breaking a barrier within the self when listening to it. It becomes disarming. To me, it’s just my cognitive display. It’s what’s in my mind, what sounds good to me. Honestly, when people produce pop they tend to go by a particular standard of what is out in the ‘market’. I am creating from a place of asking, ‘What does pop sound like to me?’”

‘Woman’ by Doja Cat! I can’t stop listening to it! I listen to it every day. I don’t know, I just think it’s really sexy. There’s a sensuality I’m really drawn towards. And I just love the way she says “Womaan! Let me be your womaaaan!” It’s like, her own way of speaking in an Afrobeat context. I really appreciate it. I’m just drawn to it.

My Queen Of Queens EP. I made it in two days and it was like, “Hold up: I have so many creative ideas, and I can just get them out really easily.” And it transpired into this club anthem EP of hip‑hop, Afrobeat, EDM pop and house. I just wanted to make these queer anthems that were obnoxiously gay, with these mantras of just owning yourself and being proud of yourself; also speaking of community and being encouraging in that aspect, because right now everyone is very much an individualist and I don’t like it. I’m currently studying to be a lecturer in the arts: I want to encourage the youth with critical thinking in academia, and also to be a representation of someone who is trans‑feminine and non‑conforming in a space that is predominantly following a colonialist mindset. But trying to de‑colonise it at the same time.

I’ve always felt like an outcast in South Africa. In Cape Town, especially. I have connected with my community, however I don’t feel like they fully understand me. Over the years I’ve noticed quite a bit of distance develop. Our cultures are so dispersed, it’s difficult to connect culturally with people. Not everyone grew up learning indigenous languages, like myself. Not everyone is connected in that sense. When I first started making music I found community with [New York‑born DJ] Venus X, [warehouse club night, pronounced ‘ghetto gothic’] GHE20G0TH1K and [Miami‑based DJ] Total Freedom: they invited me to play at their parties and we made music together, that kind of thing. That was my community. I connected so much with the music. That was what brought us together at the end of the day.

What I look back on is that there was such a confidence that came out. I was very much in a place of excitement and enthusiasm, because I was going overseas. I went to Austria, and I recorded the second‑to‑last song on the EP the day that I was flying! I gave kind of a sneak preview of it at the festival. There was a lot of excitement going on around that time. I was excited to perform on stage again after two years of this Covid mess, because all of my dates had gotten cancelled just as I was about to go on tour. So, going back on stage, that excitement was all being channelled. The main thing that really drew me toward making this EP was that, from the beginning, I really wanted to focus on conjuring positive energy with it.

The first thing I look for in a studio is a good sound engineer! Because I really cannot go into a studio where they haven’t set up anything, the microphones aren’t ready, they don’t know how to save files correctly, they record the files at, like ‑18dB... From my previous experiences with recording music, it can be really trash. That’s why I work from home now, and I do that more and more frequently because I have the control. When I do go to a studio in the city, I look for a good sound engineer I can draw inspiration from. But also, somewhere I can go and have a cigarette in peace!

Angel‑Ho: I was in a world that thrives on darkness and trying to survive by becoming something that is light and positive. It’s a battle between good and evil.

I would really have to say Lady Gaga. From seeing their journey, witnessing how they have come up, connecting with their music and their journey, with regard to the ideal pop spectrum I was envisaging myself in, and also having a personal moment with them as a fan. I met her backstage at her Cape Town stadium concert. I was the first in line, I camped outside for three days. I was so obsessed with her music in high school that I performed ‘Bad Romance’ for this variety show. I just thought, “It’s meant to be. I’m meant to meet her.”

And then, with regards to production, it was Arca. They mastered my first EP. When I first got Soundcloud, I was so drawn to the details in their music, the attention to detail. I was very much mesmerised by the beauty that they created with the mixtape &&&&&, if you know that one.

More recently, my mentor has been... myself! I’ve had to build a strength within me, because getting a chronic mental illness really changed everything in me. I had to find a strength I never knew I had within me. I had to push myself sonically, because I couldn’t process music or sound at the beginning of my mental illness. I lost all ability. My senses were overloaded and I couldn’t listen to music, because I would hallucinate over it. So I got into sound therapy and thought, “I’m going to create music, no matter how trash it sounds. I’m just going to play around every day, I’m going to listen to my second home language, Afrikaans, I’m going to listen to that radio station, because it’s a foreign language and what better way to break that hallucination cycle than to listen to something that is foreign.” It took me a year and six months to heal to a point where I don’t hallucinate over music now. I can listen to anything. But it took me a long time. So, for the enthusiasm of pop and the spectrum that I was so inspired by: Lady Gaga. Producion‑wise: Arca. And moving into the future: myself.

I think the biggest misconception is that a producer has to stick to a genre, or perfect something over time. I feel like there is a signature you can create, however. And that you can create that signature and then develop it in the musical library of the world.

Oh my word, I don’t have one! I mean, I have many. It’s not a track, but any DJ set by [American visual artist, performer and DJ] Juliana Huxtable. I was in New York, and she came to the apartment I was staying at. I was so happy to meet her in person. We went to her gig, and as soon as she started playing I was in a trance, but one I was very comfortable being in. The totality of the whole performance: the audience, the lights in the building, everything just plays so well together.

It would be a solar‑powered keyboard! The keyboard is my main instrument. I like to play around with scales, with repetition and tempo, different timings and sequences in the way I write a melody, so it’s always the keyboard. Even if it’s a drum part, I’d map the samples and then use the keyboard. I need it to be able to note samples.

Wow, that’s a very good question! I used to want to work with Arca on some tracks, but I kind of grew out of that over time. Right now there’s no one really on my radar, except for András, who I’m obsessed with. They’re from Brazil, and they have this amazing delicacy, that same nuance and attention to detail I was talking about earlier when it comes to composing and to writing. They’re fairly new, but they’re a great performer and a great vocalist. Around every seven years you find someone who you just think, “Wow, they’ve got it. they’re really special.”