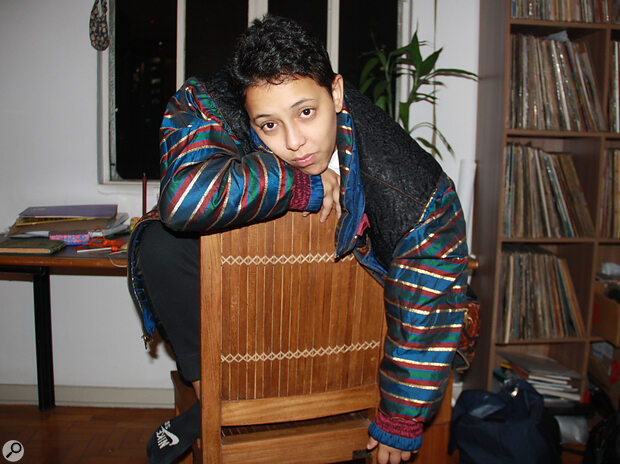 The world of production has never been more diverse, more accessible or more exciting than it is now. Burgeoning producers who might previously have never had the opportunity to step foot inside a recording studio and prove their worth are making staggering records in all kinds of environments and cultures, and with all kinds of gear — expensive or rudimentary. Badsista, aka Rafaela Andrade, is one. Now a globetrotting producer and DJ, her work with artists like Lei Di Dai Linn da Quebrada and the Multishow Brazilian Music Award winner (in Portuguese: Prêmio Multishow de Música Brasileira) Jup do Bairro has seen her grow into one of Brazil’s most eminent electronic music producers. These days she lives in the Cangaíba district of São Paulo, where she is currently working on a project with MC and singer Brisa Flow, as well as on an album of her own.

“It’s nice to see other realities,” she says. “You want to ask me about my favourite gear and things like that, but for us in Brazil it’s not so easy to buy things. The taxes are really high, and equipment is only a reality for the people who have the money. I only started to buy my things last year, like my KRK monitors. A friend gave me a microphone. I have a keyboard controller that another friend gave me as payment to work on her album. Right now I have a proper room to work in, but in the house I used to work in I had to use the living room. There was a lot of noise. It’s another reality.” She then pauses for a moment before adding, “we can use the word ‘ghetto’, I think.”

Ahh… The things I’m doing with Brisa Flow! Because, she is writing in Spanish and we have this big connection doing music. We really understand each other. I’m listening to it a lot. I’m really enjoying it. I’m also listening a lot to Brisa Flow’s last album — it’s really good. I’m also listening to Amy Winehouse, too. I never get tired of it. I wish it was possible to make an album through a medium, or something like that! It’s so sad. I wish we could have another album from her. I thought she was an amazing singer, and I really like the way she wrote her lyrics. The way that she was talking about her life. I really like people who write like that. It’s not difficult to understand what they are trying to say.

So, last year I worked with music director Jup do Bairro who is a great, great friend of mine. We used to work together in Linn da Quebrada’s band. Linn da Quebrada and Jup do Bairro are both travestis — I don’t know how to say that in English — trans‑girls? They were the two people who believed in my kind of sound. In the kind of sound that we could build together. It’s so special that they’re still alive, you know. Because in Brazil the trans population are living in danger all the time. If you go out in the street, if you take a bus… things can happen to you. At any time. So it’s really special that they’re still alive, and that they’re singing about themselves — not only about being transgender or whatever — about love, parties, about self‑confidence, about transformation. I produced Jup do Bairro; we spent two weeks together. We spent two weeks producing this EP with five or six songs together. It was really special because last year she won a lot of prizes with just that first EP. And it’s not even a whole album! We have an awards here called the Prêmio Multishow de Música Brasileira and she won the Super Jury: New Artist Award. It was a big, important thing for us. She won other awards, too… right now we’re starting to work on her album but I’m also doing this other stuff with Linn de Quebrada and Brisa Flow. I think that was one of the most important projects that I did because I believed in her, she believed in me, and we trusted each other. So it was really important to me.

Badsista: For us in Brazil it’s not so easy to buy things. The taxes are really high, and equipment is only a reality for the people who have the money.

I love monitors! But, the atmosphere is really important. I don’t like lazy people. I think that the energy is really important when you’re in somebody else’s studio. I had an experience with another artist when we went to a friend’s studio and spent about three hours trying to get one line right. Sometimes the energy just doesn’t work out at all. For me, it’s all about the music. It’s because of the music that I have this equipment now; because of the music that I can send some money to my Mum; it’s because of the music that I pay my rent. But, when I go to the studio with someone who doesn’t care about the music so much, who cares more about the image, it gets me really bored. I don’t like that. I’m here for the music. I really love that people are still supporting me and buying my music, but I don’t care so much about the exposure.

Lei Di Dai. She’s been a dancehall singer for more than 15 years, here in São Paulo. She’s a Rastafarian. It’s because of her that my first EP is so dancehall. When I met her I was really disappointed with my life. I was sad. I used to play the acoustic guitar and sing in bars for four hours at a time, and earn $20 or less. When I got to know Lei Di Dai, I had showed her a lot of the dancehall beats I was doing at that time and she asked me to work with her. It was really special because she basically took me and inserted me into the electronic and underground scene of São Paulo. Within one month, everybody — producers, DJs — was getting to know me because of Lei Di Dai. She said “OK, if you want to do this then I’m going to help you.” And she helped me with everything. Especially with contacts. She was talking to everyone about me. And she knows a lot of people here in São Paulo! I met her in 2015, and I think the first time I travelled to another country was 2018. She was making connections for me, and teaching me how to work. When I started to travel to Europe I met a lot of people, and it was really crazy because they had such easy access to equipment. Here for us, the taxes on audio equipment and equipment in general makes it so expensive. That’s why it’s so special to share the knowledge and share the contacts and the network. I know that if Lei Di Dai hadn’t done that for me, I would still be uploading music to Soundcloud and sending emails.

This is a tough question! I think the misconception is that the producer is like a machine, where you put a nickel in and then you have a beat. Sometimes there’s inspiration and sometimes I’ll go two or three weeks without opening up my Ableton Live. Sometimes I’ve had studio sessions with a friend or an artist where I go and I don’t feel any inspiration at all. And we’re there trying to make it work and it’s not going to work. Last week Brisa Flow spent three days or four days with me, I think, and we just worked one day. The other days we stayed here and watched movies, talked about other stuff, listening to music, did cooking… I think that’s part of it. Part of getting to know each other and feeling close to each other, because if you feel close to someone, the process of doing music gets easier. These kinds of things are important.

It’s kind of lo‑fi house, but that track from Mall Grab, ‘I’ve Always Liked Grime’, it’s really, really good. I used to play that track a lot and still want to play it because it really hits me. It was like a new world when I started to listen to that kind of music. What else… some tracks from Rihanna, especially from the ANTI album, the last album. It has a good bass. This is really important. There’s also a track from Mariah Carey, ‘H.A.T.E.U.’ — that one is really cool because the beat is so simple yet so… concrete.

I think I would take my guitar. There are things that I can do on the guitar that I cannot do on the keyboard. I’m looking for a guitar controller, with MIDI or something. That would be nice. That would save my life! I play more guitar than keyboards.

Anyone…? I’d have to think about it. Kasimyn from the group Gabber Modus Operandi. We met each other in Berlin at the CTM festival, and I think they’re really insane with their producing. They mix a lot of Indonesian percussion and melodies with gabber, and this is really cool. I don’t know why we haven’t produced together yet!

I would say: keep calm. Things are going to happen. Keep studying your stuff. Stay a nerd. You’re going to make money. I would say, you don’t have to feel this imposter syndrome. In the beginning, when I started to get known, sometimes I felt like I didn’t deserve that. I felt like I was just pretending. When they said I was good, that I was one of the best producers in Brazil, I thought they were lying. But right now I feel like I am one of the best producers in Brazil. Because I feel more comfortable about my ideas and I feel stronger. About my work. I know what I want to do, I know what I like, what I don’t like. People like us, from the places we came from, the path to gaining self confidence is longer to us. We have to do a lot of things to feel like we deserve it. A lot of artists and producers who came from where I came from feel this way. And we’re trying to change that.