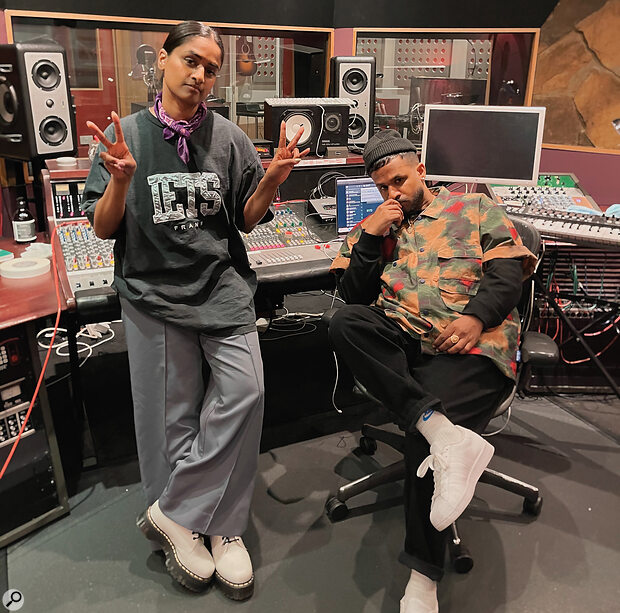 The music of Priya Ragu is, on the surface, a solo project. However, a closer look at the Sri Lankan Tamil‑Swiss artist’s work reveals a close songwriting and production partnership with her brother, Japhna Gold. Raised in St. Gallen, Switzerland before basing themselves in London, the duo create a unique brand of R&B, combining punchy electronic rhythms and deep bass with a clever use of South Indian samples, rhythms and even the Tamil language. “It’s definitely a 50‑50 thing,” Priya says. “I might be the face, but behind the face is the bro‑sis!”

“When we started to create music, it was never like ‘OK, let’s fuse Tamil music into R&B and hip‑hop.’ It just happened organically,” she continues. “One day Japhna just said ‘Hey, what if I flip this beat?’ and I was like, ‘OK, let’s do it!’ and then I even started to sing in Tamil. At one point I was thinking: ‘Oh, my God, how are Swiss radio ever going to play this song if I’m singing in Tamil?’ But I just thought, you know what, fuck it. It sounds cool, it’s something different, it’s important to me and it’s a part of my identity. We decided to include it, and the radio did play it! So, you never know until you try!”

Japhna adds: “I truly believe that artists are the bridge‑builders. Whatever god you believe in, whatever political view you have, you still come to the same concert and stand next to people singing the same lyric and experiencing the same emotions. As artists, we are the language of the world. We need more visionaries who say, ‘You know what, brown people are unrepresented and we’re gonna build that company and that label, and actually concentrate on that.’ We need more CEOs who can make those decisions and hire the right people behind the scenes.”

Priya: I am listening to old Tamil songs from the ’60s. I really enjoy it. I wake up and listen to a whole playlist from a singer called PB Srinivas. My father is a big fan of PB Srinivas, and he used to listen to it back in the day. I never really understood it, but now I really understand why he likes it. It really brings up old memories. It feels warm, like I’m at home when I listen to it. If that’s the first thing you do in the morning, it feels like the day will be amazing.

Japhna: Especially when you’re away from home.

Priya: But I wouldn’t listen to it at home with my parents. That would be weird!

Japhna: To be honest, because I’m creating music at the moment I’m not really listening to much music! But, I’ve been listening to Khruangbin, this singer called Dyo — her EP Dyologue — and the song ‘Bubba’ from Kaytranda.

Japhna: For me, I’m having the most fun and I’m most proud of Priya’s project. Not just because it’s the latest one, but because of its growth and how I personally was able to be aware of what’s going on. This is the most proud that I’ve been.

Priya: The heater! It’s always so freezing! I have to set the temperature high. I have to be comfortable.

Japhna: When you step into a room you immediately think either “I don’t feel comfortable here,” or “Oh, this is nice!” That’s the first thing I think about. The atmosphere. It doesn’t bother me if there’s a lot of gear or not — that’s just nice for the pictures! I’ll be sitting in front of a board that has so many knobs — I might have been there for two months — and I still don’t know what button to press to make it work. But the atmosphere of creating, that’s what’s important.

Priya: We have a really great engineer who helps us out, so that’s cool.

Japhna: Yeah, he brings us coffee every five minutes!

Japhna: I think, myself. I’m mentored by a lot of things around me, but I’m at a point in my life where I’m aware of it and I listen. It’s not like back in the day where I’d just shut everything down and be egotistical about it. I’m aware of what’s happening. I listen a lot to my sister, to be honest, but other than that… I don’t fear nobody! But, I do think I am my own mentor. I’ve definitely had to develop trust in my own decisions. There have been times where insecurity and fear were in the forefront. It could be something planted during childhood, I don’t know. But I had to break out of that cycle and be like, “This is me. I’m a creator. This is what I do.” It’s an ongoing thing, an everyday thing. Being in the moment and experiencing it and implementing it.

Priya: Inspiration‑wise… It’s my brother. Because he was always believing in himself and music was always first, and everything else was secondary. It was because he stayed on this path that I jumped on it as well. Otherwise I would have stayed in my safe job.

Japhna: What people don’t realise is that what they get in a track is the end product. And that to get to that end product it might take days, weeks, months or even years to figure something out. People fall in love with something and they approach you and say ‘I want this, now.’ And you’ve probably been making it for years and know everything that went into it. They think that you can quickly apply everything and just make it sound complete. Or, when you send beat drafts, they don’t understand the word draft! It’s people basically wanting a finished song: the hook, the bridge, everything. The finished product. That’s a huge misconception about the process. Things take time. Creativity can’t be forced. This idea of producing a hit, just throwing people into a studio… To me, making music is very intimate and personal. So for me to share that with someone else, there must be a personal connection. Before anything else, there must be a personal connection.

Japhna Gold: Creativity can’t be forced. This idea of producing a hit, just throwing people into a studio… To me, making music is very intimate and personal.

Priya: For me, the go‑to is Snoh Aalegra. I like how her voice is in the front and the music is in the background. It’s crystal clear, her voice. That’s mostly my reference when I’m talking to engineers.

Japhna: I don’t have one go‑to. But… Anything Michael Jackson released. It just sounds great to this day. So weird. Like, take ‘Billie Jean’, the way the drums hit… There must have been something they drank… or smoked, I don’t know. They were ahead of their time. And, everything Dr. Dre produces. I’m a drums guy, so I like when it smacks and when it’s snappy, you know!? And from that perspective it’s definitely about that. With Priya… Yes, Snoh Aalegra, that’s definitely the vibe. And I also really like the tone of HER. Her voice has a melancholic tone to it, but the way they mix it it has this crispness to it that I really like.

Japhna: My MacBook. Definitely. You can do anything with it. I’d like to have keys and drums, but I could complete the mission on my MacBook.

Priya: But, the speakers are also important!

Priya: That’s true. So, you bring the laptop and I’ll bring the speakers?

Priya: for me it’s AR Rahman. He’s an Indian film composer. I grew up with his music. He did the soundtrack for the film Slumdog Millionaire.

Japhna: There are so many, man! I would probably love to spend time with Anderson .Paak. He’s a genius, the way he knows what to play, and how to catch people. You can see his flow, his voice, his chord progressions, his feel for rhythm… it’s just insane. So, I’d say Anderson .Paak.

Priya: Be patient. Because everything is going to make sense. You wonder, as a teenager, where it’s all going. Especially as I was an insecure teenager. I only had one or two friends, I was living in a bubble. If I knew that I was going to be this person one day I would definitely be more chill. I’d probably brag about it! Doing her own thing, following her path, in a family business, you know?

Japhna: I would tell myself that society only makes you to a certain extent. So, ‘listen to your inner self’ is definitely something I would repeatedly whisper into my ear. “Calm down, work on your ego, comparison is the killer of everything. Be more in the moment.”

Priya: Yeah. It’s real. Growing up, you always see these superstars saying “Believe in yourself!” but it’s actually very powerful. Speaking something into existence and manifesting stuff is quite real if you really believe in it.

Japhna: That is so true. First thing is to step out of that negative and doubtful thinking. And that’s quite a job. But once you get it and you realise that there are more things to be thankful for, and you actually have that in mind every day, your life will change immediately. That’s the piece of advice I would give not only my younger self, but to everybody. It starts with that. You always want to be somebody you’re not, you always want something you don’t have, but you never appreciate what you have. Yo, I’m so thankful that we’re in London and that we have the privilege of going to the studio. You have to actually say it, you know? Then you’ll see how many good things are around you, and you’ll transform.