Q. Why does my mains socket keep failing?

A remote control gang strip like this, with individually switchable outlets, can help you reduce the highest in‑rush current when powering up your studio.

I’m running my whole studio from one 13 amp socket. I should imagine the total load is no more than one kilowatt. Even at twice that, which it definitely isn’t, it should still be well within the limits of the ring main. The wall socket was a twin double‑pole, industrial type of metal construction and I had to replace it with another because the first one started to suffer a very springy switch, which would eventually not turn off. Now the new switch is doing it too. I’m wondering if there could be a load issue or arcing, causing switch failure, but I don’t see how this could be the case, unless I have a problem with the ring main. Can you shed any light on the problem?

SOS Technical Editor Hugh Robjohns replies: You’d have to try really hard to draw 3kW in a typical home studio, with a few synths, computer, mixers and monitors! So you won’t be overloading the supply or socket in the conventional sense, but if the wall socket switch fails ‘on’ (so that you can’t turn it off), it’s probably due to arcing which has welded the switch contacts together. Step one is to replace the wall socket with a better‑engineered brand, by which I mean avoid the temptation of buying the cheapest Chinese‑made units from your local DIY store.

If you’re powering up an entire studio with lots of devices, each using an SMPS, they’ll all be sucking down massive in‑rush currents at the same instant.

A very common problem these days, with the almost ubiquitous use of SMPS (Switched-Mode Power Supply) ‘universal’ power supplies, is something called ‘in‑rush current’. Some SMPS designs are better than others, but typically at the moment of switch‑on there is an enormous but brief flow of current; 60 amps is not unusual per SMPS for a millisecond or two. This in‑rush is too brief to blow fuses or trip MCBs, but it can and often does weld switch contacts together when powering up. So if you’re powering up an entire studio with lots of devices, most using an SMPS, they’ll all be sucking down massive in‑rush currents at the same instant — it’s not surprising the switches get welded shut!

To help mitigate this problem, an obvious step two is to switch on subsets of equipment sequentially, thereby reducing the total in‑rush current at each stage of the switch‑on. A convenient way of doing that is to buy a switched distribution board and power everything from that. For example, Energenie make relay‑operated and remote‑controlled gang strips that make it easy to power on/off individual sockets. I’ve got a couple here and they seem to be very reliable. They also do automatic versions that are designed to turn off computer peripherals when the computer itself is shut down, and power them up when it’s turned on again. 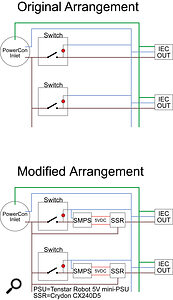 A schematic for the author’s custom switch panel, designed to manage the in‑rush current.Sometimes line‑lump SMPS units state the in‑rush current on the label, and if you have a particularly nasty one it might be possible to find an equivalent with significantly lower in‑rush. I was able to do that for a couple of items I have here that were causing problems. I have also seen standalone in‑rush limiters with 13A plug and socket, though I’ve not seen any retailers stocking them here in the UK.

Another workaround, albeit a more serious undertaking, is to use solid‑state relays rather than mechanical switches to energise the mains feed. I’ve not yet found a commercial mains distribution unit (MDU) with solid‑state switching, although there are rackmount MDUs with IP‑controlled outputs that could be used for those who don’t mind controlling everything from the computer.

In my studio I use a Bryant Unlimited rackmount switch panel to power up individual rack bays and other equipment from my desk. This uses 5A illuminated switches for each mains output and these occasionally welded themselves on due to SMPS in‑rush currents. When I got bored of replacing the switches, I rebuilt this unit with solid‑state mains relays (Crydon CX240D5 devices) to power each outlet. These Crydon SSRs need 5V DC to trigger them, so the original mains switches now power individual mini 5V DC power supplies (from Tenstar Robot), and trigger each solid‑state relay. It’s not the most elegant or cost‑effective solution, but it was necessary, as I wanted to retain the original illuminated switches. These solid‑state relays activate at the mains zero crossing and can cope with massive in‑rush currents. I’ve had no problems since. Obviously, rewiring mains MDUs is a safety‑critical job and should only be undertaken by a properly qualified technician!