How To Choose Studio Monitors Skip to main content

How To Choose Studio Monitors 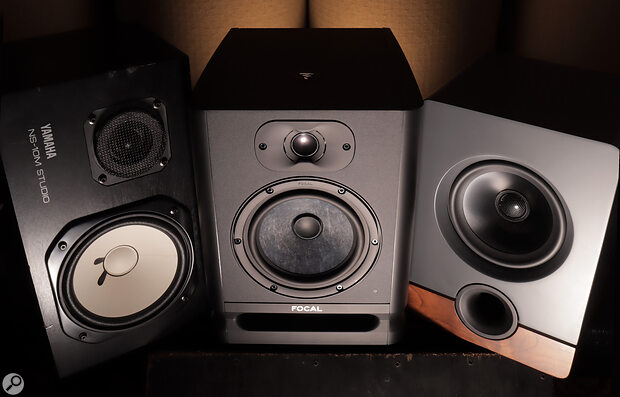 Two‑way or three‑way? Ported or sealed? Analogue or DSP‑assisted? We help you navigate the monitor maze and choose the best speakers for your studio.

I’ve been commissioning and editing Sound On Sound’s loudspeaker reviews for the best part of a decade, and one of the most exciting changes I’ve seen in the monitor market in that time is the availability of different speaker formats at the lower end of the price scale. When I first got into home recording, entry‑level studio monitors were almost exclusively two‑way, ported, ‘bookshelf’ designs (my first‑ever pair of monitors, a set of active Tannoy Reveals, matches that description perfectly) but anyone thinking of putting together a budget home studio now is blessed with the option of three‑way speakers, passive radiators, coaxial designs, ribbon tweeters and DSP — all once the preserve of seriously costly speakers. 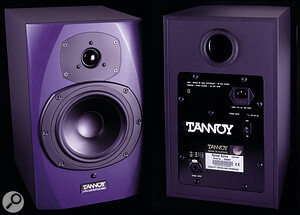 In this article, I’ll attempt to untangle the daunting web that faces a first‑time monitor buyer today, by explaining why all these different formats exist, what problems they attempt to solve, and why you might favour one over the others.

Let’s go back to my old two‑way ported Tannoys. The term ‘two‑way’ in this context means a speaker with two drivers: a relatively large one (usually concave and cone‑shaped) called a ‘woofer’, and a much smaller driver (commonly a convex dome) called a ‘tweeter’. The reason for having two drivers is that it is more or less impossible to make a speaker driver that’s capable of both moving fast enough to reproduce extremely high frequencies, and of displacing enough air to reproduce extremely low ones.

So the job of making your cymbals sizzle and your bass drums boom has to be split into two, with the small and lightweight tweeter reproducing only high frequencies, and a heavier but much larger woofer handling the lows. The splitting of the signal is achieved with something called a ‘crossover’. This takes the signal from your audio interface, mixing desk, iPad or whatever, and splits it so that the tweeter is only fed signals above a certain frequency, and the woofer only those below that frequency. (The split isn’t quite as neat as that in practice; there’s always some overlap between what the drivers play, but you get the idea.) Assuming you, the listener, are a reasonable distance away from the speaker, the outputs from the two drivers will combine in the air to present the complete picture. 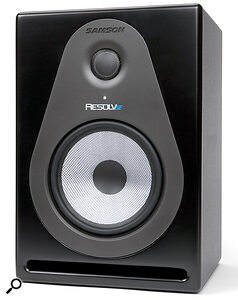 Traditionally, most two‑way speakers place the tweeter above the woofer. There’s no reason the woofer can’t go above the tweeter (in fact it’s sometimes useful to turn studio monitors upside‑down if that helps to point the tweeter more directly at your ears, as is usually recommended), but in any case it’s almost always best for the tweeter and woofer to be vertically aligned. I’ll explain why a little later.

The ‘ported’ part of our typical studio monitor simply means that the speaker cabinet has a hole in it — a ‘reflex port’, to give it its full name. Speakers without ports are variously described as ‘un‑ported’, ‘sealed’, ‘closed‑box’ or ‘infinite‑baffle’ speakers, and the two approaches have a huge effect on the bass performance of a loudspeaker.

To get to the bottom of why that is, consider why there’s a cabinet at all. What if the drivers were just mounted in a flat slab of wood? Well, you’d hear the sound coming from the front of the drivers just as you’re supposed to, but the sound coming from the back of the drivers — particularly the woofer — would also come into play. The rearward‑emanating sound would bounce around your room, and interfere with the wanted front‑firing sound in a very deleterious way. 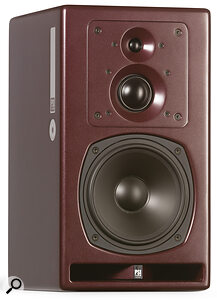 Reflex ports aren't exclusive to budget monitors; many high‑end models like the PSI A23M also feature ported cabinets.One way around that problem would be to use an extremely large slab of wood (aka a ‘baffle’), or even an infinitely large one (the theoretical optimum, and where the term ‘infinite baffle’ comes from). But that’s not very practical, so most speaker designers essentially ‘fold’ the baffle around the drivers, and now we have our speaker cabinet.

The cabinet introduces another problem: the volume of air presented to the rear of the woofer is significantly smaller than that facing the front, ie. your studio. This limits the woofer cone’s movement (because it has to push and pull against the air inside the cabinet), impeding its ability to reproduce low frequencies at high levels. The larger the cabinet, the more freely the woofer will move and the better it will be able to reproduce low frequencies. But not everyone has room for enormous speakers, and this is where reflex ports come in. 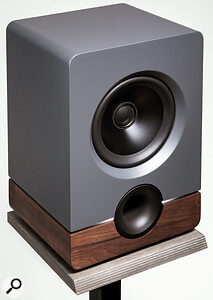 Putting a hole in your speaker cabinet essentially lets some of the rear‑firing energy from the woofer out into the wider world, thus improving its efficiency and letting it play more bass louder. There’s a catch, though: the port doesn’t increase efficiency across the woofer’s entire frequency range, but at a fairly specific frequency, and with some resonance. The frequency and amount of resonance are determined by the diameter of the hole, and the length of any tubing fitted to it (most reflex ports aren’t straightforward holes; tubes are used to more precisely tune their resonant frequency). The upshot is that, around the port’s resonant frequency (typically somewhere between 40 and 60 Hz, or higher in smaller monitors), the woofer will continue to vibrate for some time after the signal that caused it to do so has stopped. This resonance (properly called ‘group delay’ but sometimes simply ‘bass overhang’) can seriously impact a monitor’s accuracy. It can make bass drums sound bigger than they are (by artificially increasing their sustain), or it can make bass notes uneven in volume (the so‑called ‘one‑note bass’ syndrome). Terms like ‘plummy’ and ‘overblown’ are almost exclusively reserved for ported monitors!

There are other pitfalls when designing a ported monitor. Some can exhibit a ‘chuffing’ sound, emanating from the port itself rather than the woofer, when playing loud. This is caused by turbulence (the air moving in and out of the port chaotically, rather than in a neat streamlined flow), and can usually be negated by flaring the port at its ends — Dynaudio’s LYD series, for example, show generous flaring around the port exit. This ‘chuffing’ effect can also be made less audible simply by having the port exit at the rear of the speaker rather than the front (we meet again, Tannoy Reveals!). 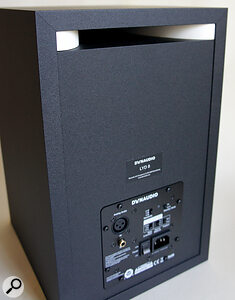 The Dynaudio LYD’s flared port exit.Another potential downside to ports is something called ‘organ pipe resonance’. This is the port itself resonating along its length, in much the same way as an organ pipe does (or like blowing over a bottle, if you prefer). There are ways around that too: Pioneer’s excellent RM‑series speakers, for example, put an extra tube coming off the main port, a third of the way in (at an anti‑node, ie. the point where the air pressure is greatest) to suppress this organ pipe resonance, while other manufacturers (like Alesis, in their long‑running M1 series) have dealt with the problem by varying the surface area of the port along its length.

There are other ways to exploit the energy coming from the back of the woofer that don’t incur the organ pipe resonance and turbulence of a port — most notably by using something called an ‘auxiliary bass reflex’ driver (sometimes called a ‘passive radiator’), or by employing something called a ‘transmission line’. I’ve discussed those in a bit more detail in the ‘When Is A Port Not A Port?’ box. 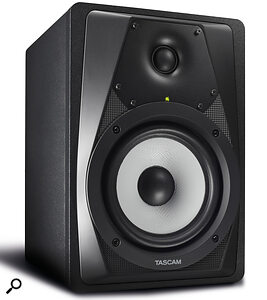 So those are the basics of our typical ported two‑way monitor. But many monitors aren’t ported — including perhaps the most famous studio monitor of them all, the Yamaha NS‑10. So why would a speaker designer choose to omit the reflex port?

Despite the reduced efficiency of a closed‑box speaker compared with a ported one, sealed speakers have a distinct advantage: the absence of port resonance. This manifests itself in the woofer stopping moving when it’s supposed to, rather than bouncing around after the fact. So no more lumpy bass notes, and no more artificially boomy kick drums.

But putting a woofer into a sealed box has another curious effect on the bass response of a speaker. With a ported speaker, the lows will tend to roll off at 24dB per octave — which means that as it gets to the lower limit of its frequency response, the level will drop off fairly sharply. So, if a ported speaker is specified as having an even response down to 80Hz, it will be 24dB quieter at 40Hz, and 48dB quieter at 20Hz. 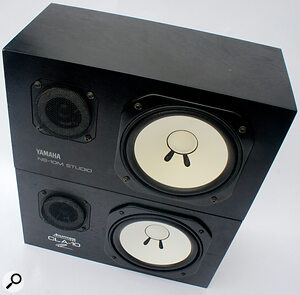 The Yamaha NS‑10, and its modern‑day recreation the Avantone CLA‑10 (bottom), both benefit from the tight bass response of a sealed cabinet.For a sealed‑box speaker, the roll‑off is just 12dB per octave, so for a similarly specified but un‑ported model, it will only be 12dB and 24dB quieter at 40 and 20 Hz, respectively. Against this, you have to balance the fact that for a given size of cabinet and woofer, a ported speaker will be ‘flat’ to a lower frequency than an unported one... So, in simple terms, ported speakers will play loud bass to a lower frequency but be much quieter below that frequency, whereas sealed‑box speakers won’t play bass particularly loud, but will continue to play audible bass at lower frequencies than ported ones. Plus, they don’t suffer from the many potentially deleterious distortions that ports incur. All of these attributes are key to the enduring popularity of the Yamaha NS‑10, and the success of Avantone’s recreation of it, the Chris Lord Alge‑endorsed CLA‑10.

That’s not to say, though, that ported speakers are incapable of reproducing accurate bass. Neumann’s KH80 DSP, despite potentially being the ‘perfect storm’ of a small speaker with a reflex port, exhibits a remarkably well‑behaved bass response, as do JBL’s affordable 306P MkII speakers, and the Focal Alpha 65 Evo speakers reviewed in this issue. Ported speakers sometimes get a bad rap, partly because it’s easier to get them wrong than sealed ones, and partly because in their quest to make small speakers sound larger, cheaper examples often sacrifice accuracy for a lower cutoff point (which looks good on the spec sheet and sounds ‘impressive’ in the shops). But as those (and many other much more expensive) examples prove, they can work very well indeed.

Let Me Count The Ways

Moving away from ports and back to the drivers themselves, the designation of a ‘two‑way’ speaker implies the existence of one‑way, three‑way and perhaps even four‑way speakers. And so it is. As I hinted at earlier, it’s not feasible for a single‑driver speaker to reproduce both extremely low frequencies and very high ones at any useful volume — yet some specialist monitors do indeed only have one driver, most famously the Auratone 5C, and its modern‑day equivalents like the Avantone MixCube. But why would an engineer listen to tiny single‑driver speakers over the many full‑range monitors available?

There are two main reasons, and both relate to the midrange. The middle frequencies in music are particularly important to pop productions (the mids are where the vocals reside, for a start), and having a speaker...