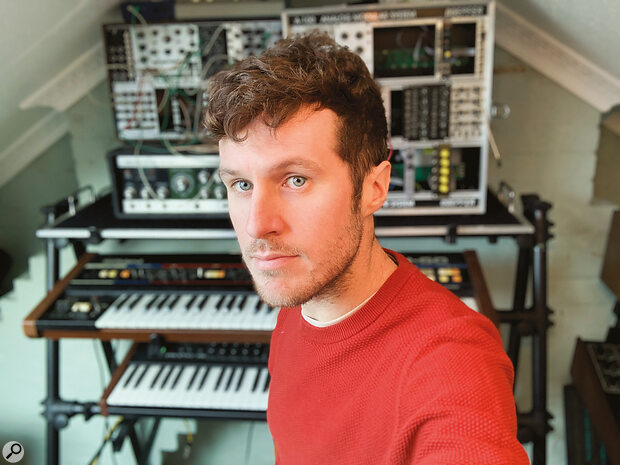 Over the last decade, Brighton‑based producer and multi‑instrumentalist Marcus Hamblett has appeared on albums by everyone from Bear’s Den to This Is The Kit. He now sits among the staple personnel of Justin Vernon’s ever‑developing PEOPLE festival movement, with the track ‘Stavesynth’ — performed on a software instrument Hamblett used to turn the voices of folk trio the Staves into a keyboard instrument — appearing on Vernon and Aaron Dessner’s PEOPLE Mixtape Vol 1. 2019 saw the release of Hamblett’s second solo album Detritus, which boasts a stellar array of guest talent.

I’ve been listening to the latest Laurence Pike album a lot — the drummer from Szun Waves and PVT. It’s really good. Sparse, interesting, improv‑y drums and electronics. Also the latest Max de Wardener album, Music For Detuned Pianos, just because I like things that are out of tune. And there’s also a remix album of that which he realised not long after [Detuned Reworks], which is probably just as good but in other ways. It’s not, you know, just a throwaway, remix‑y thing. It’s really good in its own right.

I’d probably have to say Detritus, my second solo record, just because I did pretty much everything myself. I just trusted myself and felt like I knew what I was doing. Or, at least, I accepted that in fact no‑one knows what they’re doing!

In terms of other artists, I suppose Rachael Dadd’s album, We Resonate; I was proud, I guess, because it’s not that weird and a lot of the stuff I do is weird. She just writes really beautiful songs and I managed to not ruin them and let them speak for themselves, to some extent! Whilst also squeezing in some weird sounds and hopefully pushing her a little bit. She’s from a folky background and she has very good taste in music and loves experimental stuff, but before that I don’t think she’d done much with synths really, or with drum machines.

The most important thing for me is probably the atmosphere: that everyone is comfortable. If you go to an amazing studio, a lot of people, myself included, might be intimidated by the history and the environment — and maybe even the staff. So I’d prefer to avoid that, because I don’t think you’d get the best performances out of people, or you might waste loads of time or money when you could probably get a better vocal out of a person in their bedroom. The idea is more important than the actual sound, for me. I’d rather work quickly, cheaply and comfortably than strive for perfection.

A friend called Ben Hampson. The first album I made in a studio, and then subsequently the next three or four, were all with him. He was the in‑house engineer at Brighton Electric, which is a fantastic studio. I now live about a road away from it and it has a bar now, so it’s actually my local pub as well! He’s more an engineer than a producer, but he sneakily senses the tone and makes you have ideas. Or maybe he has the ideas but makes you think you’ve had them yourself.

He likes the romance of music and of the studio, and I think that’s brushed off on me. He would rather keep an out‑of‑tune trumpet solo or keep a complete vocal take that was the first one and has the vibe, rather than comp something to death. Lots of the albums I made with him were about live tracking, with all the band in one room, and about accepting, listening to the whole song rather than picking apart your own performance. He has his own studio now with Ben Hillier, who’s done albums with people like Nadine Shah and Villagers and Elbow.

I actually think it’s a misconception that you need one, a lot of the time. Like, Steve Albini, for example: people think of him as a record producer and I think he would be the first person to say he isn’t. He seems to be an engineer in the truest sense of the word. There are ‘producers’ like Steve Albini, who is more like the technical guy, and there are producers like Brian Eno, who is the ideas guy, and then you get electronic music producers and producers who are more like film producers, who put up money and lend their name to something. Often people aren’t sure exactly what they want when they say they need a producer for their project.

I’m not saying no‑one needs a producer and that the job shouldn’t exist. That would obviously be a stupid thing to say. But lots of people get a producer when it’s actually the last thing they need, and they spend the whole time arguing with them and overriding their decisions. I’ve worked on a few albums where that’s happened and it’s just boring and a waste of time.

Marcus Hamblett: Lots of people get a producer when it’s actually the last thing they need, and they spend the whole time arguing with them and overriding their decisions.

For some reason, the Sonic Youth album Rather Ripped is one I always come back to, to clear my ears out if I’ve spent too much time on a mix and lost all frame of reference. That, for me, is a good one to help me get back in. It’s clean and airy and everything feels like it sits in the right place. And Tender Buttons by Broadcast. There’s a nice range of frequencies, really great drum sounds, things are panned nicely, everything just feels right, I suppose.

There’s an effects pedal called the Cooper FX Generation Loss, which I use on synths a lot but also on guitar, and I run drums and pianos and things through it. It’s my favourite effect of all time, and I use it on everything I do. It’s a kind of VHS emulation pedal. It’s quite controllable: there are six knobs on it, and it has kind of random pitch fluctuations, but you can control how much and how often they fluctuate. Then you can introduce really nice, grainy noise, and it’s kind of random and natural‑sounding. There’s also a sample‑rate reduction thing, which makes synths or whatever sound more airy and natural‑sounding if they’re sticking out. And then it has a high‑pass as well as a low‑pass filter on it. So, there’s a lot you can do with it to make it fit really nicely in an arrangement, or to make them sound completely mad and really stick out in an arrangement. So that would be up there. I’ve got three of them.

The company OWOW make this thing called a Wiggle, which is a wireless MIDI controller. I have one of them which is awesome and I really want to get two or three more! It’s a tilt controller: it’s wireless, and you can assign its three different axes to different MIDI CCs and control an effect or a synth, or whatever. You can set them to send notes as well. And you literally feel like a magician, or God, when you use one. You can assign one axis to play notes, and then quantise that to a scale or whatever, or triggering chords, and then another one on the filter, and another one on the wet/dry on a reverb or something; then you just move your hand around and create the most beautiful sounds. It’s a really magical instrument. I’ve done loads of interesting studio stuff with it, because you’re not thinking about the parameters. Once you’ve set what it controls, you can then get really absorbed in moving and listening, and become absorbed in the sound you’re creating. Hopefully they’ll be back, after Covid or whatever; at the moment none of their products have been on sale for like a year.

This one is quite hard! I’d be interested to spend, like, a day with certain producers, but I’d worry it would ruin my idea of them if they weren’t how I wanted them to be. I think I’d be really interested to work with 1970s‑era Brian Eno. When I was a pretentious student I massively fell for Brian Eno; I read biographies of him, listened to all his solo stuff, got really into Talking Heads and almost everything he was involved with. I think we might be similar, in a way. I think we’re more about… like, ideas, maybe. And I think we might both be blaggers! And up until now we’re both just about getting away with it... But, yeah; he just seems like a really nice bloke with lots of interesting ideas. He’s much more concerned with creating something new and interesting than he is in the ratio setting on your compressor.

You don’t need someone else to give you permission to do it, you can just do it. I think I felt I needed a professional who definitely knew what they were doing to do the final mix or whatever, because I wasn’t ‘qualified’. And, yeah, 10 or more years later, I don’t feel like I’m any more qualified! But I do feel like I have the confidence to work on someone else’s stuff. To even call myself a producer, whatever that is!