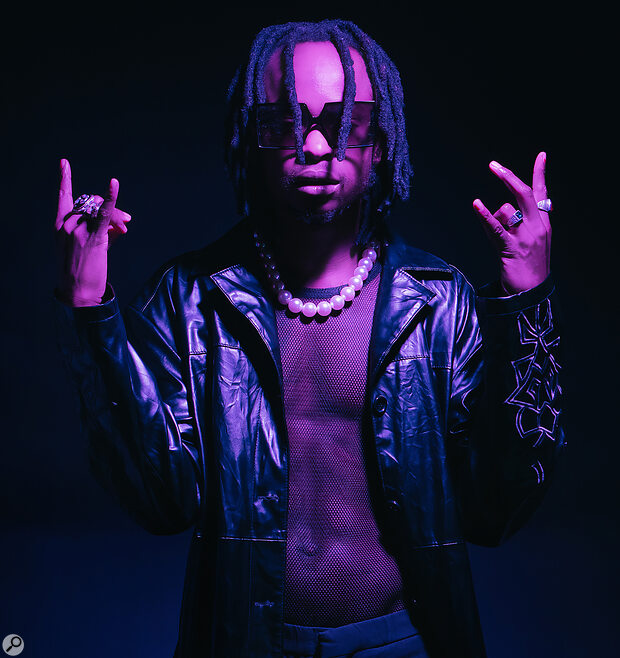 Malawi‑born Benn Gilbert Kamoto (aka Gemini Major) moved to Johannesburg in 2009, where he has been based ever since. The producer behind an array of South African stars such as Nasty C, Sho Madjozi and Cassper Nyovest, he has twice won Producer Of The Year at the South African Hip‑Hop Awards. Alongside this he is also an artist, with a formidable catalogue of original material to his name. As he explains, not all of his artistic ambitions fit with the genre expectations currently placed on him. “The scene here is very fast,” he says of Johannesburg. “If you want to be an artist then this is where you want to be. Because everyone’s here. It’s where people come to find their ‘American Dream’. I’ve been producing in Johannesburg and in South African hip‑hop since around 2014 or 2015. That’s when everything kicked off. Now I’m producing record after record. But, as an artist… I just want to make beautiful African music.”

Oh, man! It’s just African music in general right now. My soul is there. I don’t know if I actually have a favourite, I’m just in love with so much African music right now. Most recently, it’s Tems. She’s from Nigeria. She’s really dope.

I have to say, it’s the Gemini Major record I’m working on right now. The one I’m about to drop. I’ve never been so proud of myself. It’s called Island Water. It’s an EP. It’s a transition from what people are used to getting from me — a new direction. But it feels so right, because I feel like I’ve found myself and connected with my soul. I’ve always been making music as a hip‑hop artist, but now with this project I’ve really connected with myself. As a producer I’ve just been banging out music, all the time. But now with this project — as an artist and as a producer — I’m really proud that I’ve found myself, I’ve found my sound and it feels good. Everything is connecting and it’s where I’ve always wanted the energy to be at. It’s African fusion. I’m mixing a lot of sounds, experimenting with a lot of African sounds. I’m from Malawi, that’s where I grew up, so it’s quite easy for me to go back to where I started.

Studio monitors. I always like to see what I’m working with when I step foot in a studio. That’s the first thing I usually notice. “Oh, those are nice monitors! Let me try them out!” They have to bang! Right now I’ve got a pair of PMCs. They’re my favourite. If I had to upgrade, I’d upgrade those.

I think it has be my older brother. I’ve always applied his theories of life to my music journey. He’s guided me through everything. So he is definitely my mentor. He taught me responsibility, working hard and just… aiming for better. He showed me that at a very young age. Tried to teach me that as much as he could. I’m a very humble person, simply because of the values my brother taught me. About how to manoeuvre through life, about patience. Most importantly he was God‑fearing, you know? I feel like when you’re intact spiritually it always brings you back to ground. Keep your faith up because it’s something you definitely need in life, especially if you’re pursuing music. You need a lot of faith! And patience, and those things that he definitely taught me early on. At some points he wasn’t supportive of my music — he had his own dreams for me. I was still going to school and doing my advanced diploma when I was 19. But he told me, “If you’re sure you want to do this, then you’ve really got to do it.” So I couldn’t fail!

I’m a music producer, right? And then, there are people who make beats. You get it!? Music producers and beat makers… people tend to put both in the same bag, and it’s very irritating! If you’re going to work with me, let’s have a studio session. It’s fair enough if you’re in a different country — but if you’re in the same country I feel disrespected when someone just says to me “OK, send me beats.” I’m a music producer. I want to work. I want to have an input. What if I have an idea that could change the whole song? My role isn’t just to create sounds. Anyone can make a beat, but to produce a song is a whole thing. You have to see it through.

Gemini Major: I feel disrespected when someone just says to me ‘OK, send me beats.’ I’m a music producer. I want to work. I want to have an input.

Right now it has to be Made In Lagos by Wizkid. I just love it sonically. It’s beautiful: vocally, the way the instrumentation works, the drums… Everything is just clean, you know!? Every time I’m trying to get a bounce, to create a sound, I always go back to that. When I hear something beautiful I always try to pay attention to it, to learn from it.

I’d take my laptop! That’s the studio! I use FL Studio and Logic. Right now I mostly use FL Studio. It’s very flexible. I’ve also worked on PreSonus Studio One a lot. Earlier on I was using FL Studio to produce beats and then taking it into PreSonus to record vocals there. Then I ended up getting into Logic. On the desert island I’d just produce all day. What else could I do!?

I have two: firstly the [Yamaha] NS10 studio monitors. They should still be making those. And also the [Neumann] U87. The vintage one. Just, the sound! The warmth… It’s beautiful. And with the NS10s you’re able to hear everything. When you’re making the mistakes, you’re going to hear the mistakes! I like to have two sets of studio monitors, one to bang and one to come to for reference and expose all the rubbishness in the sounds. The NS10s do that perfectly. If your mix is lacking then you’re definitely going to hear it.

Stick to the plan. When I started making music, as a producer I wanted to be the best at everything, making all kinds of music. And that’s OK — I’m doing fine at that and still exploring, but as an artist I wanted to be an African artist, not a rap or hop‑hip artist. But somehow, while coming up, I got caught up in the hype and started making a lot more hip‑hop as an artist. Not that it was bad, that worked very well, but most of my success in my career comes from that. I feel like I would be somewhere different if I’d actually have just stuck to the plan and believed in what I was doing. But obviously I lost direction with everything that was happening here, with the people I’m working with, with everyone’s hip‑hop. The industry that we have here does not accommodate a lot of those other sounds. The plan should have been not just to cater for where I am right now, which is South Africa. I should have thought of the whole of Africa, the whole world. My dreams should have been bigger. They are now!