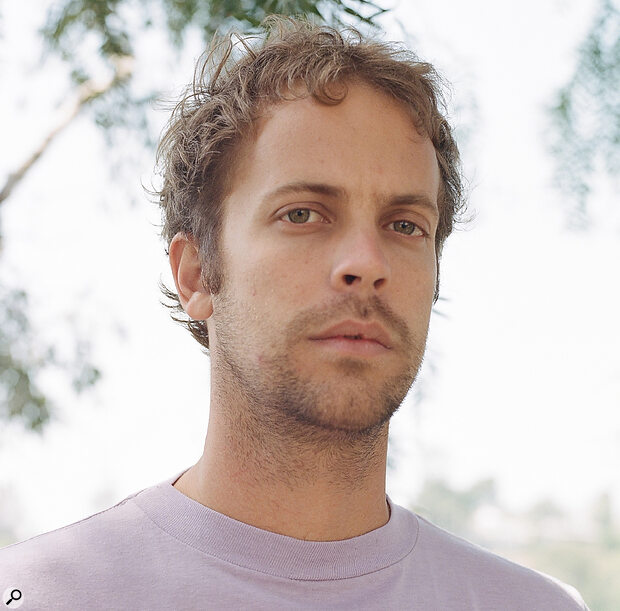 With albums by band Pond and solo project GUM released in 2019 and 2020 respectively, it’s almost impressive that Perth’s Jay Watson has any time to spare for his integral role with antipodean psych‑titans Tame Impala. The multi‑instrumentalist and producer has spent the last few years ping‑ponging between London, LA and Perth, developing his skills while cultivating a keen appreciation of what he lovingly dubs ‘fun junk’.

At the moment I can’t stop listening to...

Shiny Joe Ryan, who’s my bandmate in Pond: his solo album, which we just got mastered two weeks ago. That album is called Shiny’s Democracy, which is a fantastic title. As for other music, I can’t stop putting on this one Can album when I do the dishes, Future Days. I’ve been listening to it for a decade or so, but I just find it’s, like, the ultimate cooking or cleaning album! As you get older and more boring, like I am, that’s almost the main backdrop for listening to music now.

There’s a heap of stuff on Future Days that I can’t work out how they did, with the machinery of the time. There’s that weird ‘wup wup wup’ sound at the end of the first track, and part of me thinks it’s just a tremolo on an amp and they’re playing along to it, but then it sounds so gridded and metronomic… I don’t know. There are bits in there that sound like they’re from the late ’80s, even though it’s from the early ’70s. It’s quite futuristic for the time.

I think the Pond album The Weather. Pond wasn’t a joke band, but in our heads, we just liked things like The Mighty Boosh, and every time we wanted to do something ‘serious’ it didn’t seem like it fit the band. We’d slowly worked toward it for years and there’s still ridiculous music on it, but I felt like we pushed through and worked really hard on making it into a big, beautiful piece of art. Something to be proud of, in a serious way. Almost every song on the album, there’s a bit in there that hits a point, which felt really inspired and meaningful at the time. We’ve kept that up with stuff we’ve done since, but that felt like a turning point. We started to sound more like ourselves and less like the things we were ripping off!

It’s quite simple, I think. It’s just stuff that looks fun to make music with. A studio might have the world’s greatest console or something, or the world’s greatest collection of Neumann mics, but if there are no cool drums or synths or guitars… Not that you need that to have a good studio; but you need gear that elicits inspiration, hopefully. In our studios, some of it’s expensive and some of it’s junk, but it’s fun junk. And looking at it, you just want to plug it in and have a go. I’m quite shallow when it comes to recording gear. I think: the cooler it looks, the more I want to plug it in and the more I want to get out of it. That’s just me. Music has always been really visual for me. So making it with something you feel cool about, that can go a long way to generating cool ideas.

A friend, Montero, he and I made an album in London when I lived there, in Mark Ronson’s studio. He’s a friend and just let us use it when he was out of town. And I went in and it was like, ‘Holy shit!’ It was like, really fancy stuff, but the coolest fancy stuff. Prophet 5s and big old RCA ribbon mics… Just the best and coolest stuff from each decade of recording, really. And I feel like in half of that album, when I listen to it now, I can hear the glee in the playing. All the toys!

The biggest misconception is that it just means one thing. It’s only recently that I’ve become comfortable with writing ‘produced by’ on records. Some records are produced by people who did almost nothing, and there are other records where the producer has co‑written all the songs and played most of the instruments. I think that’s the thing I find frustrating: people can assume that if I’ve produced someone’s record I’ve done more than I’ve actually done — or, if someone else has produced our record, that they’ve done more than they have actually done. It’s too wishy‑washy! I like ‘engineer’. Or, if you’ve helped write or helped arrange it, then you get credit for that.

I can’t think about recording bass without thinking of the Beatles’ bass sounds. It’s so annoying to mention the Beatles, but I feel like they hit a bass sound and that’s just it. From Revolver all the way to the end of the Beatles, it’s there. You need the ‘donk’. Whenever I set up my bass in Pond, I have this preamp on top of my bass cab that I can dial in the EQ on, so I’ll dial in the ‘donk’ and play ‘Dig A Pony’ and if it sounds right then it’s good to go!

It changes all the time, but most recently I bought a real Roland 808 drum machine. I wasn’t trying to buy one, I bought it because it was a really great price, and I thought to myself: it’s a lot of money but it’s an investment! And it’s in really good condition. I’m in love with it. I’m amazed at how versatile it is. You can use it to do that really tinny, like, Suicide drum machine sound, and you can make the most stonking house and hip‑hop beats on it. And it never sounds daggy. Do you guys say ‘daggy’ in England? It’s kind of like… socks and sandals. Dorky. Anyway, it never sounds daggy on anything! It’s way more versatile on any type of music than I thought it would be.

Jay Watson: I’m quite shallow when it comes to recording gear. I think: the cooler it looks, the more I want to plug it in.

I can’t think of one specific piece of gear, but I do often think a lot of equipment is made too well now. It doesn’t f**k up in the way that a lot of the old bits of gear I have do. Like, an old mixer; they distort so easily, and that’s a big part of the sound and what makes stuff you run through it sound really badass. And the same with old synthesizers: I’ve got this one called an MG‑1 Moog Realistic. It’s a really old, cheap, simple synth, but it sounds like a synth that someone has built themselves in the shed at the back of their house, you know? I would kill to have one of those where you could save presets and we could use it live in Pond, and where it didn’t go out of tune. But it’s always this trade‑off with something super modern and reliable that just doesn’t sound f**ked‑up enough.

I think if I had my own audio company it would aim to make gear that functions perfectly well but sounds sort of broken. I like performances and mixes that sound like they’re going to fall apart at any second, and I like equipment that sounds like it’s going to fall apart at any second. It’s like when the battery is dying in the fuzz pedal, and everyone gets all excited and you try and get the take down before it actually dies. If you could somehow get that with the mod cons of new equipment, then I would like that.

I have a lot of respect for J Dilla. I think a lot of the music that’s come since him, whether it’s Kanye or Jai Paul, or Caribou — stuff that I really love — you can just hear how a lot of it comes from that J Dilla stuff. I think, as highly rated as he is, I think he’s still weirdly underrated. He’s like the Jimi Hendrix of hip‑hop production.

Not to be so concerned about what you’ve already done, or to dwell on the mistakes you’ve made. From an engineering standpoint, the biggest thing I’d tell myself would be: just get yourself a good interface and maybe one really good preamp, and then you can just cruise around with one guitar lead and an XLR lead and it’ll sound good. The last couple of GUM records, it’s all this one 500‑series BAE Neve clone. I also have this pair of these Australian preamps made by Sebatron, which I really like. The guys in King Gizzard & The Lizard Wizard got me onto them. That BAE thing, it was less than a grand and I didn’t have anything else, it was just in a little lunchbox on its own. But the records after that sound noticeably better than when I just plugged straight into an M Box.