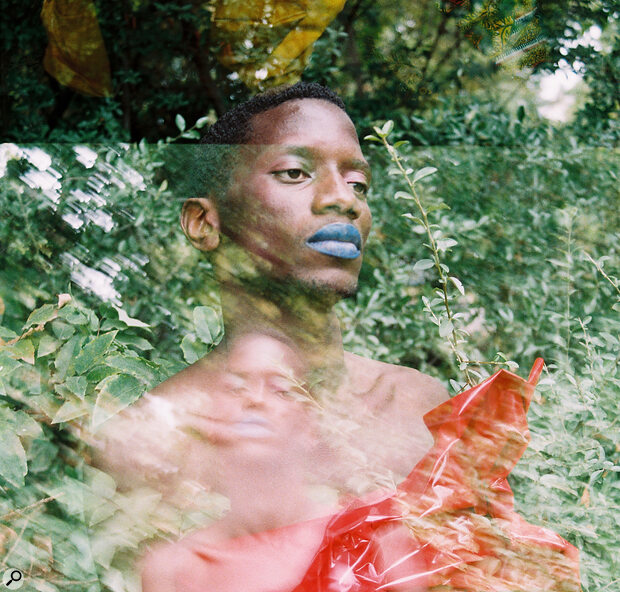 Ugandan producer and performance artist Tayo Alemi, aka Authentically Plastic, creates experimental electronic music they describe as “free form femme fuckery”. A mainstay of the Nyege Nyege festival, they are also associated with the Kampala‑based Nyege Nyege Tapes label and its offshoot, Hakuna Kulala. Authentically Plastic gained recognition in Kampala, DJ’ing at queer house parties as part of the underground dance music scene. “Even when I’m producing,” they say, “I have the approach of a DJ; I come at it with that outlook. I started out with DJ’ing with controllers and playing on four decks. A lot of layering stuff on top of each other, getting loops and layering them, like, four different tracks on top of each other. A very granular approach.

“I’ve always been into music, but I think it really exploded when I was in South Africa for university. My first exposure to electronic music was, you know, kwaito and gqom music, all the stuff that was coming out of South Africa. Those things were like really new to me. That sound. I found it so moving. I mean, it pierced me, with so much intensity. I was also listening to a lot of stuff that was not from the continent, though. Experimental and noise stuff, from artists like Gang Gang Dance and the Knife.”

Since then, Authentically Plastic has been a central resident of the maverick collective ANTI‑MASS, which describes itself as having a “common interest in shaking up traditional forms, techniques and palettes; exploring them in all directions, discovering new tensions in familiar methods, always with an eye towards the alien and disorienting”.

Recently, I’ve been listening to stuff by like Dean Blunt and Hype Williams. Hype Williams is his collaborative project with Inga Copeland. So I’ve been listening to that a lot. Mostly because it’s been very moody in Kampala. It’s the rainy season. So everything’s a bit hazy. It’s unusual for Kampala, but it’s nice. Things cool down a little bit, but I still prefer sunny weather! Also an artist called Astrid Sonne. I’ve been really into her stuff. It feels, kind of, orchestral... I don’t know! Because I have this obsession with music that sounds like there are chance operations in it. Accidental things. And I get that feeling from this music. In my compositions I like to have some, like, unruly element in there, that sounds like it’s accidental. A chance element.

I feel like I want to say my album that’s coming up — but then, I don’t know, I think I would need a bit more time to know if I’m really proud of it! I’ll say, the compilation that I released with ANTI‑MASS, called DOXA. It’s kind of like a mini‑compilation, and it’s done in collaboration with my friends Nsasi and Turkana. The three of us make up the musical side of ANTI‑MASS collective, and we did a bunch of collaborative tracks through the pandemic. We were spending a lot of studio time together. It’s a reflection of so many things I feel about electronic music and the direction that it should go‑ the direction that I want it to go, personally. And making music collectively, with other people, is just really great!

My favourite track on there is one that I made with Nsasi, called ‘Galiba’. It’s influenced by an intense acid trip that we had together on Lake Victoria. We were out on a boat on the lake, and we had this acid trip where the waves were just crazy on the lake and the boat almost capsized. But we were hearing sounds on the lake. We were both hearing the same rhythm. So we tried to recreate those sounds on this track.

My studio setup is not very complex. But I need a good pair of monitors. Like, crystal clear sound. At the studio here we have KRK monitors, which are usually OK, but I tend not to be very specific about gear. Because in Kampala, we don’t have so much access to it, you know? It’s not that easy to find. And if you do find it, it’s not cheap. So most of the gear that we have, we get when we’re travelling to Europe. We put some money together and try to buy gear there. But, because it’s quite expensive, it’s still out of reach for most artists here. So, this hyper‑specific outlook towards gear... I don’t really have that. Because we just make do with whatever we have.

My Mentor is Rey Sapienz [artist and founder of Nyege Nyege Tapes imprint label Hakuna Kulala]. He was pushing me to come to the main studio and residence of some of the Nyege artists, where he was teaching classes on production. It was very informal, it felt like being taught by a friend in his bedroom. I started learning with Ableton. And the rest is history! It put me into a space of wonderment, really, of being inquisitive about how stuff is made. A lot of my interest in experimental music came also while I was in architecture school. I was learning this very critical way of looking at things and thinking about how things are made. That was my first exposure to the idea that music could be a tool for world‑building, basically. So, being in those classes, finally learning how to make actual music... I felt, ‘OK, I can use this to say something. To open up a unique space.’

I could say a lot about Rey. Rey is just one of those people who lives and breathes music. Constantly making music and, like, has no other source of sustenance! Yeah, his whole outlook is informed by it. For him, it’s this solo thing that he does, but it’s also a communal thing that he also does. Rey is always checking up on everyone, seeing if they’re making music! Seeing what new stuff I’ve made. We’ll go to the studio and play stuff, which he’s always curious to hear, and he’ll give his feedback... yeah. he’s just a very open and caring, sharing person. He just has no limits.

Authentically Plastic: I don’t build tracks in the studio. I normally prefer to be outside! In an open space, I suppose, where I can move around a lot and feel the intensity of what I’m producing.

First of all, I like to limit it to just one day, at least to build the skeleton of a track. I don’t like coming back to things too much, unless I’m mixing or trying to master something; those parts of the process. But yeah, for me the studio is something I come to later. I don’t build tracks in the studio. I normally prefer to be outside! In an open space, I suppose, where I can move around a lot and feel the intensity of what I’m producing. So, usually my setup will just be my laptop and a Bluetooth speaker, outside. I cannot separate producing music from the need to be able to move around in space. I cannot be inside, in the studio for long hours, just creating a track. Outside, I’m seeing other people around me, or I’m just on my own.Maybe it’s because that’s how I learned how to produce.

There’s this track that I recently discovered, called ‘BB’ by Shygirl. I would like to make a track like this. I find it really interesting. It feels like the studio session with this track must have been really fun, and I’d love to have been in that space. I always wonder how they felt, making this. I like the very saturated highs in the track. It almost feels sparkly but also very... deadly, also! The flow of her voice on the beat is really incredible. I haven’t worked with vocalists before, but I’d like to think that if I did work with a vocalist it would sound like this. I would aspire to like create something that level. Also with the beat, these very like sharp highs. I really like that.

Also Hieroglyphic Being, I feel like he does that a lot with his music. Very saturated highs. I don’t know if it’s because I’ve got some kind of hearing damage, which makes me seek that out! When I was learning how to produce, Rey was always complaining, ‘The highs are like too high!’ but I’ve always been drawn to that.

It’s funny, because he’s in my mind... but yeah, Hieroglyphic Being. I love that his music is so saturated. I mentioned liking these rolling highs — I find it kind of hypnotic, and I feel that with a bit of his music. There’s an intensity there that I don’t hear from so many producers. I love that it’s rhythmically complex, in the same way that I try to be rhythmically complex. He’s from Chicago. You can draw a line between Sun Ra and Hieroglyphic Being. I think it’s very much that same world. He has the same kind of obsession with world‑building and Afrofuturism that Sun Ra had. Yeah. There’s always this narrative, hinting at ancient Egypt and things like that. There is even an album that he did in collaboration with members of the Sun Ra Arkestra.

I like sampling sounds from other releases. But also making them go in a different direction. Often I’ll just put effects on effects on effects onto the sound, until it sounds nothing like what it was originally. There’s an enjoyment I get from that. Lots of the samples I use are really unrecognisable from what they sounded like originally. I like the process of getting something familiar and taking it in this completely alien direction. I really do like that. But also, I like it when I sample something, maybe a certain rhythm or a vocal, and there are traces of the original sound in there. I think that can be like a nice tension to have in the track.

I would say, ‘Just start making music!’ These days, I just think, ‘Why didn’t I get into this sooner?’ Not that I feel like I’m on the clock or anything, but I didn’t know I was so into music at that time. ‘What are you doing in architecture school? Learn how to create music! Learn how to produce, somehow. Just get into Fruity Loops!’ Because there are all these kids who are 21 or 24 and doing world‑shattering stuff, you know?