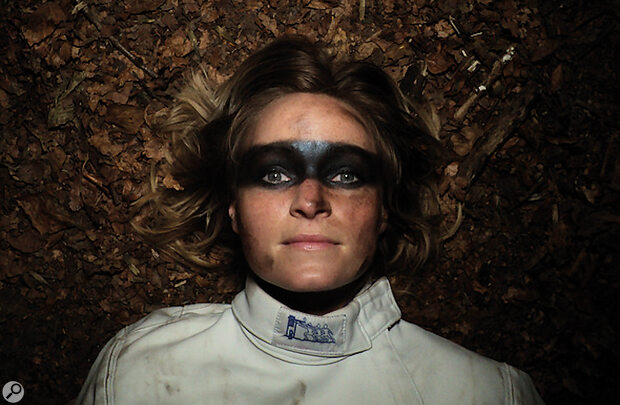 Combining deft production and fluent beat‑making with no‑holds‑barred spoken word and singing, Bristol’s Billy Nomates, aka Tor Maries, has enjoyed a fast ascent to cult success. Her self‑titled debut album was released in 2020 on Invada Records, the label founded by fellow Bristolian and founding member of Portishead, Geoff Barrow, and she has a new album due for release in January.

At the moment, quiet is nice! I’m quite busy. So, to be honest with you, my sound of choice is... not a lot! There’s just peace and quiet where I live. I’m quite lucky. I’ve got a basement flat opposite an allotment, there are birds’ nests… it’s quite quiet at the top of the hill. So I like just having the window open, hearing the birds in the daytime. It’s very nice.

I think I’m most proud of my upcoming record. Which feels like a cop‑out thing to say! But truly, I feel like it represents the scope of what I want to be as an artist — and it took a minute to write. It took about a year, I nearly rushed into it last year, but didn’t. I took some time with it.

I think the temptation, when you have a little bit of success and you’re on a little bit of a roll, is to be like, “Quick! Get the next thing out!” And I’m really glad I didn’t do that. I hope it just has some interesting ingredients. I feel as though my first album massively represented where I was in life and represented what I could do in that place. And now, three years later, we’ve been through a bit of a fucking turbulent one. I think maybe this has introduced a little bit more emotion and a little bit more depth, hopefully. And I’m really proud of that. It’s not something that I originally thought was going to happen for Billy Nomates. I wondered if it was going to, kind of, carry on this fierce trajectory. There’s a heap of vulnerability to this next record... “My most personal work to date!” God, I hate myself...

I look for those odd or old tools first. I worked at Invada Studios in Bristol a little bit on this next record, and their selection of things really suited me well. If a studio has a [Roland] Juno‑60, that’s a good starting point for me! I love them. I feel like there’s nothing you can’t do with a Juno‑60, if you’re really open to it.

But yeah, it’s mainly the strange things. It’s the odd little analogue drum machines that knock about or, you know, something in the percussion trolley, maybe an odd thing that just makes a strange sound, and that could run through a whole track but really quietly, so you don’t know it’s there but it makes the song run. I really like those things. Also, good coffee in the kitchen.

I don’t know how he’d feel about it, but in terms of understanding sound and its capabilities, I would say Geoff Barrow. I’m always interested in his take on things. He’ll often find something that I haven’t thought about, and make me think about it. It’s often about what doesn’t need to be there. What is that thing over there? What is it supposed to be doing? He’s never too flowery with feedback. He offers an honest opinion about things in terms of my music and I’ve always appreciated that, perhaps I haven’t shown it in the moment!

I’m not overly familiar with Portishead’s music but I’ve always understood and recognised their pioneering impact. Now isn’t the time, but I know a few years from now I’ll go through their back catalogue. I look forward to that. His score work on soundtracks like Devs or Ex Machina... odd and interesting. BEAK> are also a hugely influential band sonically, and they operate in their own way. Invada Records specialises in soundtracks but it’s also championing, I guess, the stranger corners of music. I admire his approach and sensibilities, both to songs and beyond.

I can understand if people wouldn’t immediately make this connection, but I always go back to David Bowie’s Low. I’ve got Low on, like, all the time! It’s one of those records where every time I listen to it, I hear something new. I don’t tire of the melodies. I just think it’s a timeless piece of work, and his most interesting one. And it was the one that people weren’t so keen on when it came out, so I love it all the more.

For me, it’s a reminder to just do something different. There’s still nothing that sounds like Low. It’s totally mad, and it has a theatrical side to it. I often think of theatre in songs, in a strange way. I’m not entirely sure what the correlation is. But in some ways that makes sense to me. One of my favourite songs of all time is ‘Always Crashing In The Same Car’. It’s understated, and whether in the right or wrong mood it floors me.

Again, I don’t want this to sound like a cop‑out... but, a good atmosphere! Look, you’re not running a bank, you’re making music, you know? So, it has to be fairly laid back and human. And having good chats about things before you start. I take my shoes off a lot. Especially for vocal recording, I’d rather not wear shoes. Like you’re just at home, you know.

It’s all the stuff around the thing itself. A good technician. If you’re producing and working with a co‑producer, a good relationship with those people is key, I think. A nice atmosphere. Get a nice coffee and talk about the world! Just have a human touch to the day. And then get on with the song. It’s an intimate experience and an exchange. I believe it’s easier and makes the recordings more natural if you like and trust the people you’re with.

Billy Nomates: I don’t shy away from classic, popular records. The thing is, they’re classic records for a reason.

Low. That’s probably obvious. And it just gets more intense, every year. It’s the ’70s. He’s in Berlin with Iggy Pop — who is also a great inspiration. I think it would have been fascinating to witness what that time was really like, you know. They were living fairly frugally, by what I’ve read, they were making music and they were getting clean and getting away from stuff. I’m fascinated by that. I don’t drink, and I don’t dabble with drugs. I think it’s interesting what happens when you’re in a clear mind. To see, you know, how mental and deep are you willing to go without too many distractions — or aids.

I don’t shy away from classic, popular records. The thing is, they’re classic records for a reason. Heroes is another good example. There’s so much going on in there. And when you really tear it apart, it’s the odd things that make it. It’s the sounds that make you go, “That doesn’t really make sense to put that there! Like, there’s an odd scraping sound there that just sits really low, underneath everything. And you think, “Why is that there?” But then you take it out, and you’re like, “Ah. Well, that’s the atmosphere gone.”

That is a question. I’d like to work with Steve Albini. He mentioned that he was a fan of what I was doing on my first record, which was very cool and nice of him. He brings a really interesting and organic approach to all of his musical endeavours and the industry around it. I don’t know what he would do with my stuff or what he’d really make of it and thats intriguing. To have somebody with that kind of experience and attitude to music, similar to Geoff, I think it makes for honest results.

I think it’s that burst when you’re first demo’ing and you burn off that first demo, and it’s in a crappy MP3 format, and it’s in some headphones that are being held together with tape because you’re too cheap to buy the expensive ones. I’ll just have a listen in my flat or go for a walk in the park or around the harbour with it. Nothing ever really competes with that moment. The joy is at its biggest there for me. From there, it’s a process. And don’t get me wrong, it’s an interesting process, but before that point, it’s my ugly creation. and the world has no idea what I’ve just done. And it might never, if I decide it’s crap!

It’s yours, flaws and all. No‑one’s dissected it, no‑one’s gone, “Let’s look at this. Let’s look at that.” It just exists, in all its terrible state, primarily as a feeling that you wanted to capture, because that’s what I think a demo is. So much is up for debate from that point. I’ve learned to not dissect too much from a demo. Not to play with it too much. Because I think you can lose energy sometimes. We have to trust the sound we’ve made. It’s totally OK to put that crappy GarageBand preset synth sound somewhere, if that creates the feeling. Geoff’s a big one on that. He will always say, “Live with it.” I’ll create something and he’ll just say, “Go and live with it.”

Just make stuff! Ten years ago, I was 22. I would have been very self‑conscious about being loud, being female... I probably wouldn’t have had, for want of a better word, the balls to do what I was doing. I wish I’d just sketched more, sonically. In my late 20s, not a day went by I didn’t sketch, because I felt like I’d just not done it enough.

Also, just to trust my ideas. To trust my writing. Good and bad. Because I didn’t. I played in bands and I was very much influenced by the idea that there are parameters around music and what it can look like. But actually, it’s like: No! There is always another space. And then another space, away from that other space! And who really cares what everyone else is doing? I didn’t feel that at 22. But I know that at 32.

AKG C414 The Ultimate Comparison: XLS vs XLII vs B-ULS vs EB
2 weeks 2 hours ago.