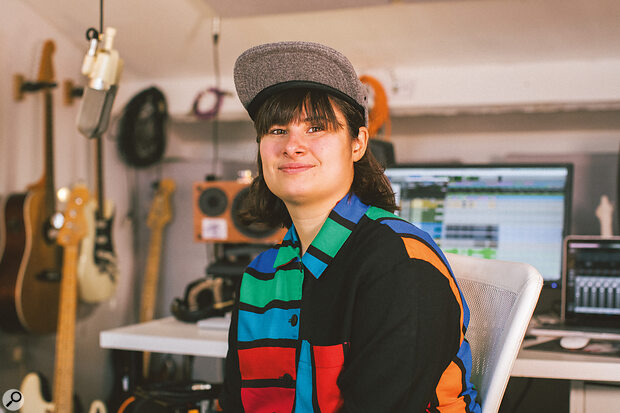 In our new monthly feature, we track down the new producers who are making waves and find out what makes them tick. First in the hot seat is 28 year‑old Philadelphia‑bred, East London‑based Steph Marziano, who has recently shot up the career ladder from indispensable assistant to session‑directing producer. She has worked with the likes of Sam Smith, Kasabian, Bruno Major and Mumford and Sons, and most recently lent her skills to Petals For Armor, the chart‑topping first solo LP from Paramore’s Hayley Williams.

At the moment I can’t stop listening to...

Lucy Dacas’ record, Historian. It’s fucking great. Genuinely one of the best drum sounds I’ve heard in a while. The song ‘Night Shift’. I love that snare. Also, I went back to some classic Janet Jackson recently! Her record Control came out in 1986, and it’s also been such a big drum reference for me recently. So modern‑sounding. So, I’ve been listening to two completely different drum sounds, but I feel like those two opposites almost encompass me as a producer.

It’s always the most recent project. Hayley Williams’ record came out in May; I co‑wrote three of the songs and did additional production on them as well. I had made a record three or four years ago with one of my favourite artists, Denai Moore, and the story goes that someone just sent Hayley a playlist. I got a call from Denai a year and a half ago saying “I’m in LA, Hayley wants to fly you over to do a session. If you can get here in three days then come and join the session.” So I flew over the next day and did writing sessions with Hayley and Denai for Denai’s album and we just had loads of fun, the three of us. We really bonded.

After that we just sent each other demos for a while. I was just sending her whatever I’d written that day. Looking back on it, it’s kind of nuts that I had the confidence to send someone I’d only just met a demo I’d made that day! But she said “Just come to Nashville.” And, at that point I don’t think Hayley had done many co‑writes outside of the Paramore community, so it was quite a big thing for her to invite someone else in as a co‑writer. It was the most fun, creative week. And we became really good friends. I think I’m most proud of the fact that I didn’t have nerves. It was only afterwards that I went “Oh fuck, that was pretty mad!”

To be honest with you — and this is definitely something that has changed in the last few years — it’s backline. When I started working at RAK and Strongroom studios, I was like ‘Wow, they have incredible desks and incredible rooms!’ but possibly more important is that they have incredible guitar amps, a vintage Rogers kit, a vintage Ludwig kit... It’s all great if you have the world’s best microphone and the world’s best preamp, but if the actual snare sounds shit, it’s still going to sound shit! I can make do with whatever preamps, but I want the first round of creativity to be there. So that’s always the first thing.

An A&R called Jane Third. She was one of the first people to take a risk on me as a producer. I’d met her as an assistant, and she was the A&R for Metronomy. We briefly said hello and chatted, and a week later I gave a ‘women in music’ chat, and she was there as well. She said “You should come to the office, it would be great to chat.” She knew how early on in my career I was, and that I hadn’t had a big production credit. I’d produced stuff before but nothing to the level where her label was. And she said “You’d be great for Denai Moore,” and gave me my first production job. Ever since then she’s been such a good mentor in my life. She’s one of those people who I’ll catch up with every six months. If it wasn’t for her taking that risk on me, who’s to say where I’d be?

There’s a reason there are a lot of similar types of people doing production, which is because A&Rs can’t take risks — for X amount of reasons. So when you have an A&R who is willing to take a risk, to change culture and to change society, it’s just really nice to see.

I remember, three or four years ago, I did one of those big events based around women in music, or women in studios. To be honest with you I really resent having to do these specific ‘women in music’ things. But, that being said, it was me and a bunch of friends, Marta [Salogni], Izzy [Gracefield] — and we just said “Quite frankly, you can’t expect more women to be producers if, at the top level, [A&Rs] aren’t letting that happen.”

In the DIY scene there are plenty of women producers, but as you get higher up there are less and less. I don’t think it’s necessarily misogynistic, but people think, “I’m going to go with that dude because he did those four records in the early 2000s which are a reference point for this band.” So you need early adopters. Jane is one of them. It’s not just with women in music: it’s with people of colour, it’s with LGBTQ... like, we’re trying to be more diverse as a culture.

I was saying the other day to my manager: I’m really happy with how my career is going. I’m doing super well and I’m proud, but I am starting to see the glass ceiling. I’ll meet a major label A&R, show them what I’ve been working on, and they’ll say, “Steph, I’ve got the perfect project for you!” — and they’ll play me a completely different genre. And the reason is that the artist is a woman. I’ve had to fight harder for male artists.

Steph Marziano: There’s a reason there are a lot of similar types of people doing production, which is because A&Rs can’t take risks.

I think the biggest misconception is that it’s more of a technical or musical role than anything else. It is those things, but for me it’s always been about being a person in the room who connects with the artist. At the end of the day it’s not the Steph Marziano record that’s coming out. It’s the record of whoever I’m working with, and I want them to feel as comfortable and open as possible, and that’s more important than the kick sound I get. Because the kick sound will come.

You know what, I don’t think I have one. I tend, for every artist I work with, to have them make me a playlist with as many different references as possible.

Either my [Elektron] Digitakt or the [Teenage Engineering] OP‑1, or my [Sequential] Prophet... I think my Digitakt. Because, in addition to creating things on it, it gets someone excited in the room. For me, that is the most important element. Even if we don’t use what we’ve made on that drum machine, it might have got us chatting to then make something else.

Jack Antonoff. I find him really fascinating. He does both pop music  and leftfield music really well. I think what he did on that St. Vincent record... She was always one of my favourite artists and it was a big move for her to go with a pop producer, and I think they did it perfectly. So he could do that while also making great records with someone like Taylor Swift. I think that shows a true producer: someone who can do an array of genres.

It’s good timing for this question — I think tomorrow is the anniversary of me moving to the UK! I’m so grateful that, realistically, over the last 10 years I’ve had a really good career, but there were so many times when I was first starting out, when I was assisting, where it was really tough. So, I think I’d tell 18‑year‑old Steph to keep going, even though you have to sacrifice loads in your life for it. It’s worth it.