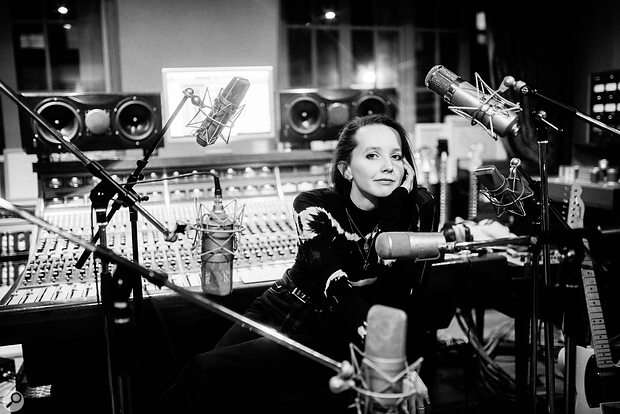 Despite still being resident at London’s Hoxa HQ, 24 year‑old British‑American engineer Dani Bennett Spragg spends much time at Toast Studios as accomplice to legendary analogue obsessive Craig Silvey. Recipient of the 2019 MPG Breakthrough Engineer of the Year award, Bennett Spragg began her career as a teenager, assisting on records by Kurt Vile, Foals and Trent Reznor. She soon went on to work as a fully-fledged engineer with such artists as Baxter Dury, Blanco White and Malena Zavala, and most recently has lent her touch to albums by the likes of the Rolling Stones, Noel Gallagher, Ed O’Brien and Jarvis Cocker.

Probably Tell Me I’m Pretty, the Cage The Elephant record. ‘Trouble’ is up there in my favourite tracks of the last few years. The production is so good. Dan Auerbach at his finest. It sounds great. Tchad Blake has mixed all the Black Keys records, and anything outside of the Black Keys that Dan Auerbach produces, Tchad Blake will also mix, which is partly why it sounds so good! Also, the Raconteurs record that came out last year, Help Us Stranger. That Raconteurs record doesn’t really have much ‘production’ on it in the same way that Tell Me I’m Pretty does. Help Us Stranger is super‑live. Just Jack White being weird.

Definitely Malena Zavala’s record La Yarará. It was a slightly strange record to go into. I’d only met her once before we started it and now we’re super good friends. At the time I was working on the Blanco White record, On The Other Side, at Hoxa, and Malena had come in to do some backing vocals and lend her ears, essentially. It was about a month before she was due to start her record, and she was asking me about studios and where I thought she should do it. I recommended Urchin in London Fields because she wanted that big Buena Vista drum sound, which you can’t get in Hoxa because the ceilings aren’t that high and it’s quite heavily treated. It’s a really great room, but that’s a sound that you can’t really get out of it.

So, I just suggested Urchin, and then I got an email about a week later saying ‘We need an engineer for Malena’s album at Urchin!’ We did two, maybe three weeks there. Almost everything apart from vocals. Also, recording [Malena Zavala’s live album] at Abbey Road was so great. One of the best days ever, so much fun. I was real stressed about that day, doing a live recording with 10 musicians or however many people, but we had two great assistants — well, an assistant and a guy who was down on the session sheet as a ‘recordist’. I just thought ‘What the f**k is a recordist!?’ It turned out he was the Pro Tools op, essentially. I didn’t touch the computer the whole day, it was great. Anyway, we had a really great team and it went better than I could’ve hoped. Definitely a career highlight.

The live room. As in, the sound of the actual room. It’s the one thing you can’t recreate. If your room sounds like shit, there’s no point. Urchin, for example: if you look at the gear or the mics or the backline, it’s all quite minimal. But if you want that versatility in the room sound, it’s perfect. It sounds great in there. Same as in Abbey Road Studio 2. The room sounds so good. I didn’t have to do anything to the Abbey Road stuff. I literally didn’t do anything on the way in: no EQ, no compression. It just sounds great. The majority of it is three room mics on a Decca Tree at the top. So easy! A Decca Tree is what they’ll use to record orchestras: three Neumann M50s in a triangle. And they have them permanently set up at Abbey Road.

The person I consider to be my mentor

In a big way, it’s Jimmy [Hogarth] from Hoxa. He’s the first guy who gave me the opportunity of downtime, and was super happy for me to use Hoxa whenever I wanted. His mentality was: the more work I did in there, the better assistant and engineer I’d become for that room. I don’t know where I’d be if I hadn’t been at Hoxa for the past four years. All of the work I’m most proud of has come out of that room. Like, everything I did last year: the Blanco record, the Malena record, the Superego stuff… it all came from one Hoxa session that I assisted on for a day.

The biggest misconception about the role of the producer/engineer

Nowadays people don’t consider an engineer something that you want to be forever. People think that an engineer is going to go on to become a mixer or a producer. That didn’t always used to be the case. You used to be able to be a recording engineer for your whole life and have a great career. Also, I think a lot of people feel like they don’t need an engineer. If someone has come from the bedroom‑producer background, they sometimes don’t really know what an engineer’s job is, maybe because they’ve never had to record an instrument. Except for vocals. People just have very different ideas of what an engineer’s job is! Sometimes I’ll actually end up on sessions working with producers who have never worked with an engineer before! They don’t know where that line is; what you’re supposed to be there for. They might think you’re more of an assistant, that you’re there to look after them and make the teas and coffees, but actually your job is to set up the session and do the recording!

Sometimes I’ll actually end up on sessions working with producers who have never worked with an engineer before!

Sometimes you’ll end up on a session with a producer who wants to be really hands‑on; they’ll want to be at the desk, doing all the EQ’ing and stuff. And if you’re being pedantic about it, that’s actually not their job. It’s the engineer’s job. And then, some producers you’ll get, like a Rick Rubin, will just sit at the back on the sofa. He’ll come up with the creative ideas but won’t touch the technical side of stuff. The line between assistant, engineering and producing can be very blurry. I think the only way round it is to have a conversation with whoever you’re working with to actually establish where the line is and what they need from you. Otherwise everyone is stepping on each other’s toes.

‘Miami’ by Baxter Dury, because I worked on it and I know exactly what it sounds like. It’s a Craig [Silvey] mix, and I’ve listened to it on his monitors a load of times, and in a ton of other studios, so I just know it super well. There’s not that much in it, instrument‑wise, so you can hear everything really clearly. So, if I’m in a new studio, it’s not a reference track that I’ll try and match, but it is a reference track to get me used to new speakers or something.

You know what: Dan Auerbach is up there. He rules! He’s an analogue weirdo. If you see the stuff that the Black Keys tour with… it’s stuff that should never go on the road. It’s super‑rare, collectible, weird stuff. I think it’s amazing that he cares that much about his live setup, especially in a world where we have things like Kempers, so you have rock bands with no amps on stage. That’s what he loves. It’s quite rare now to find someone who really cares about that stuff, about analogue gear. I feel like him and Jack White are two of them: guys who have crazy analogue studios in Nashville. With analogue you never get the same thing twice, I think that’s what I like about it. Whether it’s a mic, or an amp or a guitar, or whatever — they’re designed to all be the same each time but they’re never actually the same, and it makes working with it so much fun. It can potentially make our jobs a lot harder, but I think it’s worth it.

It would be to stand up for myself. The first job I ever had in this industry I kind of got pushed out of, and it makes me really angry that that happened to me. I was doing a work experience internship thing at a studio and had a really hard time with how I was treated by one of the engineers, so I left. I didn’t really keep my relationships with the people at that studio in the way that I would’ve liked to, as a result of the fact that I just left quietly. I don’t blame myself, because I was really young. I was 18. I just wish that I’d kicked up a fuss so that something would’ve been done about it. Two things like that happened to me in the early days of working in studios, and I should have just been louder about both of them.