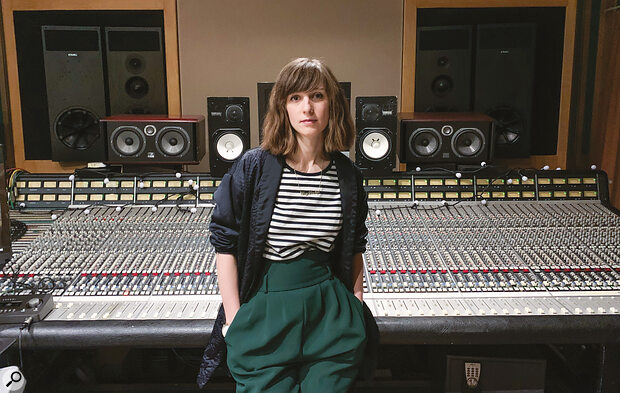 A protegée of Fraser T Smith, engineer Isabel Gracefield has spent the best part of her career to date at London’s celebrated RAK Studios. Having engineered for artists from PJ Harvey to Dua Lipa, she remains a devotee to the art of characterful mixing and a proponent of unconventional studio spaces.

I’m a musical monomaniac, by which I mean I listen to one track on loop for days. Which is probably boring for the people around me! I love artists that create a complete world: Tyler The Creator, Sault… I’m still not over ‘Cellophane’ by FKA Twigs. I was also recently blown away by ‘Daisy’ by Ashnikko: the lyrics and the vocal performance. My all‑time most listened‑to record is ‘Nomanisisland’ by Subtle, from the album For Hero For Fool. I put it on about once a week when I’m not working. That drum sound: it makes me want to smash stuff, in a good way.

There’s always something I love in every session. I’m just happy that someone wanted me in the room! I met my husband playing in bands together, wildly unsuccessful. A few years ago we co‑wrote and I produced an album, Hope, under the name Tom Forest, with the absolute intention that no one would ever hear it. It deals with some heavy moments: the loss and near‑loss of siblings, impending parenthood… Of course, it got signed right as we embarked on the insanity of having kids. It’s influenced by our love of large spaces, soul, electronica and the drum intro from ‘In The Air Tonight’. I was lucky enough to be allowed to create the imagery and direct some of the videos as well.

In the gap between lockdowns I got to engineer Fatherson’s new album for Steph Marziano and that was great. She let me cut loose with all sorts of wacky things. Gates everywhere! I’ve also been really lucky to do a little bit on Dua Lipa’s most recent LP, which is a great record. Also last year I got to engineer for one of my all‑time heroes, but the project isn’t announced yet!

For me, you can’t boil this down to one thing. A great studio is about so many details coming together. Great backline, a decent range of options gear‑wise… I like some expensive stuff and some weird character options. A decent‑sounding live room, many lava lamps, biscuits: you need it all! The first studio I worked in, Goldtop in North London, was one long dairy shed with a wooden floor and brick walls — no separate control room, very little separation between instruments. It made me value spill for glue and warmth and the odd happy accident.

I also love recording in people’s homes. I think people tend to instinctively make domestic spaces sound good, with just the right amount of reflection and soft furnishings. I spent a couple of years doing writing sessions at home. I took over a whole living area and kitchen. The kitchen part of the room was great for percussion and vocals, and I really liked having some speaker spill coming through, making odd little loops and vibe elements. As a mix engineer I get to hear all sorts of bedroom recordings, and in the right context, it can be a great flavour.

The person I consider to be my mentor

For me it hasn’t been a person so much as a place. I’ve been working at RAK Studios for almost 10 years. I started there as an assistant working with the brilliant in‑house engineers, in particular Richard Woodcraft, Mike Horner, Robbie Nelson and Helen Broadhurst, all moving between rooms and making vastly different records. It’s quite hard to get a bad sound there. Great gear, beautiful rooms. Sometimes I amuse myself by putting completely the wrong microphone in the wrong place, and smashing it through a Distressor, just to see what happens. It’s great when you have that level of trust in a setup to be able to play around. Seeing such a range come out of each room has helped me develop my own signature.

Beyond picking up a language of mic and gear choices, I also got to see different styles of interpersonal relationships between the engineer and the producer and the artist. Also, having a supportive environment where you can ask questions and share information and resources — or even just gripe about a tricky client! That pathway, runner to assistant to engineer, it’s been vital for me.

Probably the biggest misconception is that there’s any definitive description of the job. I’ve seen the producer be anything, in any way. My favourite sessions are the ones where everyone — the engineer, the producer, the label — are all in search and support of the artist’s vision, and where the artist knows what they want. How that vision gets realised can take any form. I do think the core of the role is to be a cheerleader: to be the person in the room who is most in love with the music and keep everyone on track and productive.

I spend a lot of time in advance of any project listening to reference lists made by the producer or artist, so that we have a language for everything: drums, bass, vocal sound and so on. During the actual session I think references can destroy confidence; it’s hard to hear something mastered when you are still building a sound. So, while we might talk about them, I prefer to listen less. Then at the mix stage references can come back in and guide everything. I’m always A/B’ing.

This is all I need: a modest SSL E‑series, some ATC monitors, a GML 8200 and two U67s. And a full‑time maintenance person to look after it all...

Over lockdown I’ve been doing a lot more in‑the‑box mixing, and on a long day I notice that it can be slower for me to move through analytical listening and tune into the finest details of my emotional response to the material — which, for me, is where the work actually happens. For me, the SSL E‑series is a shortcut to that listening state. I also love the width and the glacial sheen of the mix bus. I love listening on ATCs. I find I can make fast decisions and not return to them on those monitors, although I do always like a tiny speaker A/B for balancing bass. A GML 8200 is special sauce for me, it’s just so juicy and fun, the most musical and intuitive EQ I’ve used. I love sculpting the mix EQ with it, although I always have to bring my settings in 50 percent. They can get pretty wild if I don’t watch it. I also love a [Empirical Labs] Distressor or two.

Beyoncé. She’s creating on a whole other level. Lemonade is such a complex work, and I’m blown away by the intertextual play between music and the film. If you haven’t listened to the Dissect Podcast’s 16‑hour breakdown of the album, I highly recommend it! If you have any doubts about her capabilities as a producer — and why would you? — this will put them firmly to bed.

I would love to work more with artist‑producers, especially ones who have a strong visual component to what they do. It’s often a bugbear of engineers, but I’ve always loved visual directions for sound: things like ‘Make the guitar feel more orange!’ That makes sense to me. I’d love to see inside the process of artist‑producers like Björk, Grimes and FKA Twigs who have that visual artistry.

Start the pension now! I do a huge amount of planning and prep with colour‑coded spreadsheets. Pre‑session me does all the boring stuff so that on‑session me doesn’t need to, and that opens up the headspace for looking after the producer and artist’s needs. Knowing all of that would have saved me a couple of ‘whoops’ moments in the past.