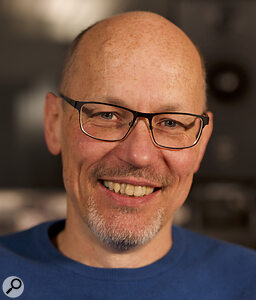 Sam Inglis, SOS Editor In Chief.Operating a studio is a relatively low‑impact activity, but building and equipping one is another matter. Conventional construction techniques make intensive use of materials like concrete, mineral wool and plasterboard. These are environmentally problematic and create structures that are not reusable. Moving a studio means tearing down all those internal walls, throwing everything in a skip and starting again.

Kitting out your new palace likewise comes at a cost to the planet. Much gear is made in China, in factories that may not meet Western environmental standards. It’s then heavily packaged and loaded on to container ships, before planes, lorries and courier vans deliver it to our doors. (Or leave it behind the green bin!) And when it eventually breaks or becomes unsupported and unusable, it can’t be mended or recycled.

But is there anything we can do to improve the situation? Building a studio is risky in itself, so it’s understandable that people don’t want to add to the risk by moving away from the tried‑and‑tested approach. However, there are modular studio designs such as the Boxy Room, which can grow or move with you as your needs change. Alternative materials such as wool‑based insulation can offer excellent acoustic performance, and some have even explored radically different techniques such as straw bale construction.

Is it far‑fetched to think that in the long run, environmental credentials could give your studio a commercial edge?

We can also exercise choice when buying equipment. Where is it made? Does it use sustainable materials? Will the manufacturers commit to providing spare parts, software updates and schematics? It’s surely only a matter of time before the EU’s much‑trumpeted Right To Repair encompasses studio equipment. That has to be a good thing, but could we go further and campaign, for example, for a right to continued driver support for computer peripherals?

More and more manufacturers are recognising that going green is the right thing to do, not just for its own sake but because it makes their products more appealing. Boutique makers such as Tierra Audio and the team behind the Melodium 42Bn mic reviewed in this issue have woven sustainability into their product lines from the start. Ableton Push users who upgraded to Push 2 were assured that their original units would be rehomed, not scrapped. Genelec are a shining example of a larger manufacturer who are committed to sustainable production.

The greenest option usually isn’t the cheapest in the short term, but a studio build isn’t a short‑term project. Musicians are environmentally conscious, and they too can make choices based on more than just immediate utility. Is it far‑fetched to think that in the long run, environmental credentials could give your studio a commercial edge?