Why I Love... Labels 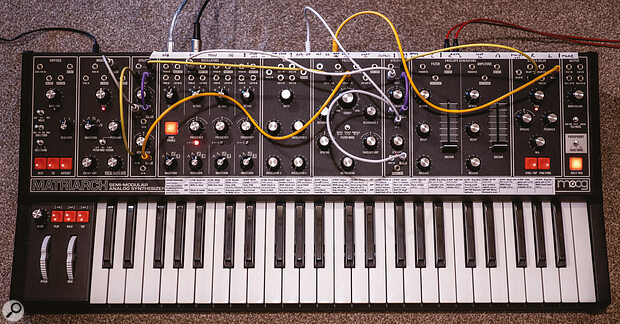 In the modern studio information is power.

Great‑sounding gear with big feature sets — what’s not to like? Well, for one, user interfaces that are so obscure you forget how they work the moment you put down the manual. And you did read the manual, right? And you have brought it with you, to the gig, where the gear starts behaving weirdly and there’s no mobile signal?

Maybe some people can memorise every last intricacy of their gear, but I’m not one of them. Instead, I stick labels on it, summarising all the stuff I want at my fingertips while I work.

It started innocently enough, marking up the rear‑panel sockets of synths and audio interfaces, scribbling on masking tape stretched across their top panels. All too soon I was drawn into the world of Eurorack, spending wild nights with mysterious multimode modules, flashing alternative firmwares over and over again. I badly needed an anchor, a reference point... and found one in the form of my laptop, a laser printer, a few sheets of A4 and more scribble strips.

Seriously, we should all always read the manual when learning any new gear. That’s especially important for things like synths and effects pedals that have lots of unguessable button combos and hidden features. Thereafter, probably only a note‑form reminder will be needed to bring everything flooding back.

Maybe some people can memorise every last intricacy of their gear, but I’m not one of them.

So emerged my first ‘crib sheet’, for Mutable Instruments’ Warps Eurorack module. Knocked up on the computer, it summarised every function and knob mapping, for the original and extended firmware, and fitted perfectly on a blank panel right alongside. I’ve since done something similar for many more synths, and I find that just the process of summarising and abbreviating teaches me loads about the gear. Then, when making music, the crib sheets don’t slow me down the way searching through a manual does (assuming I can even find it), and they help ensure there’s always a more meaningful alternative to the ‘happy accident’.

My most recent labelling project was my Moog Matriarch, a synth with 54 global settings hidden behind button‑ and key‑press combos. Nine verbose pages of the printed manual are given over to describing these, but one rainy lockdown day I managed to squeeze them all into a strip that runs along the top of the keyboard, and I haven’t looked at the manual since.

If you ever get an urge to label your own stuff, avoid using adhesives that could cause damage or leave a residue. ‘Artist’ or ‘console’ tape is the stuff, or purpose‑made removable printer labels. Some swear by Dymo label printers too.

Interestingly, a few manufacturers incorporate cheat‑sheets from the off. Nord’s Lead synths (for example) could so easily be bewildering, but front‑panel print makes them a breeze to work with. Similar (and mildly hilarious, I can’t help thinking) were the large panels that opened up on Alesis’s late‑’80s HR‑16 drum machine and MMT‑8 MIDI sequencer, hiding an entire manual’s worth of info within. And, of course, plenty of gear employs friendly, intuitive interface concepts that require neither manuals nor cheats. That’s true even in a modular world, and it goes to show that well‑designed menu systems and displays are a help, never a hindrance. However you come by it, in the modern studio information is power.