Why I Love... The JBL Control One 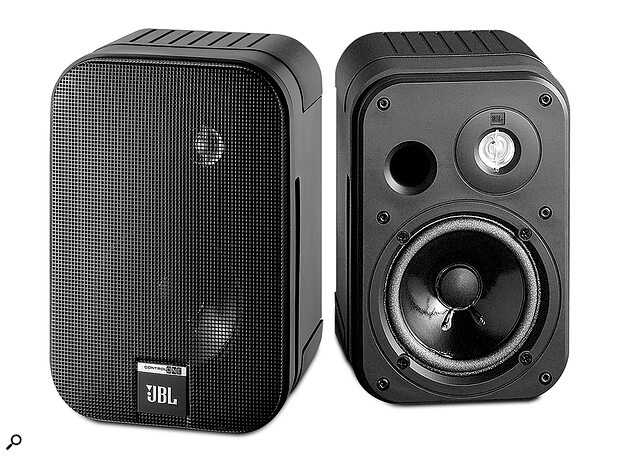 When asked "What is your favourite loudspeaker?" I feel, as a sound designer in theatre and live performance, the answer ought to reflect the stunning selection of d&B, Meyer and E&M gloriousness that I get to experience on a regular basis. Publicly it will be but, secretly, my love is reserved for a tiny little box that has been my saviour in many situations.

For theatre designers, the first shows of our career are often low/no-pay situations in low/no-tech function spaces. In one particular venue, a room above a pub, the 'sound system' (I use this term in its loosest sense) did emit some sort of audio, but any serious resemblance to loudspeakers ended there. It was not the unique qualities of the speakers that were initially the most notable, but their positioning: one was on the floor, and the other on top of a wardrobe. Why there was a wardrobe at all in this theatre I could not explain then or now, but I did ask the appointed sound technical person if it would be possible to have them at the same height. This particular technician was, as so many were in those days, male, bearded (in an 'I haven't seen soap or a razor since the '70s' way, rather than hipster cool), deeply unfriendly, and with all the sartorial elegance of Stig of the Dump. He fixed me with a gaze and said, "No one's ever complained before."

The very lovely Royal Court Theatre, where I had a real job at the same time as designing, loaned me four JBL Control Ones. These being so light, I could rig them from the overhead grid, and this gave surprisingly good coverage in the audience area.

JBL Control Ones with dented grilles, sticky with fake blood, painted bright yellow for some forgotten scenery reason, are the unsung heroes of theatre audio delivery.

But how good is the sound from a Control One? Well, compared to hearing audio through two different wardrobe-mounted (or not) fluffy-floofy, clarity-free boxes of doom, really very good indeed. I remember listening to a Handel extract that I had carefully carved out using [Adobe] Audacity for a particular cue, and at that moment, it was one of the best things I had ever heard. Context counts for a lot, and is perhaps worth remembering in every aspect of creating audio for a live performance.

As the shows got bigger, the rigs got bigger and better, but there is still room in the biggest of rigs for a Control One. A great thing about them is that they are so inexpensive, meaning that if something bad happens to them they can be replaced.

"So why don't you just look after your speakers?" I hear you cry. Well, in theatre we sometimes need sound to come out of the ground, or through a wall, or be in the same place that someone spills water every night. JBL Control Ones with dented grilles, sticky with fake blood or painted bright yellow for some forgotten scenery reason are the unsung heroes of theatre audio. Front of house, the main system takes all the glory, but right in the action, on-stage speakers are often vital. If the doorbell or a phone doesn't ring when it should, your show will be severely affected, and the audio needs to be situated in a realistic space that might be subject to all sorts of abuse. So when we're told, "The designer needs something to make the sound of frying oil, then have a bag of gravel emptied over it, and in the next scene they pour petrol over it and set fire to the whole thing," the only answer can be, "Let's use a Control One."