Ross Orton talks to Nigel Humberstone about his transition from playing drums with Add N to (X), Fat Truckers and Jarvis Cocker into the world of production, remixing and songwriting. His steel city stories include working with Arctic Monkeys and Working Men’s Club, amassing mic pre-amps, favourite microphones and setting up his ‘drum centric’ studio in Sheffield, UK. 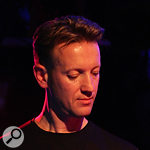 Nigel Humberstone is a film music composer and founding member of In The Nursery, the Sheffield-based band who have released more than 30 albums since 1981 with their music featured in numerous film soundtracks and theatrical trailers.