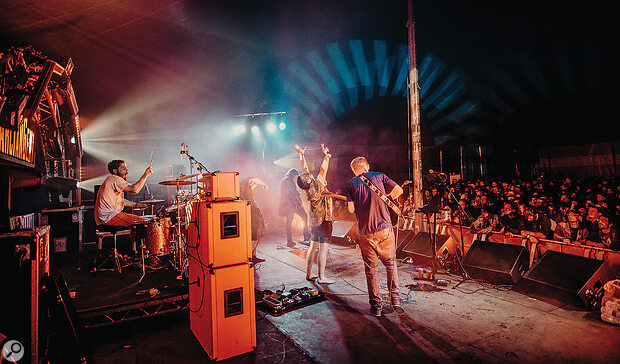 The rules of heavy metal are well established, but for their latest album, Pigsx7 guitarist and producer Sam Grant added a few of his own.

It's probably not a stretch to assume the phrase "don't let the name put you off" has become something of an epithet to Pigs Pigs Pigs Pigs Pigs Pigs Pigs. In fact, few names could better express the north-eastern British neo-metal band's energy, aggression, artistry (it's seven repetitions, no more, no less) and disarmingly lighthearted self-awareness. The band's rhythm guitarist and producer Sam Grant cheerily informs me that it's by no means the most off-kilter band name he's played under, and since this is a family-friendly magazine I won't quote him on that any further. 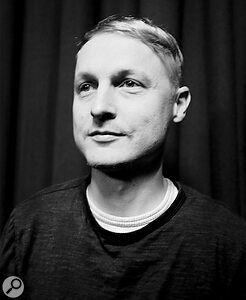 Pigsx7 rhythm guitarist and producer Sam Grant.The 2018 release of critically acclaimed LP King Of Cowards saw doors open for Pigsx7 that they'd never previously thought possible, considering that up to that point they had thumbed their nose at almost every sensible career move suggested to them. Suffice to say, when third album Viscerals was announced in January 2020 the weight of expectation was considerable. Fortunately, the band couldn't have been better equipped to achieve what they needed. Not only can they boast a formidable player-producer in the form of Grant, a true sonic obsessive with a hawk's eye for detail, they also enjoy on-tap access to a studio lovingly built from the ground up by the man himself in the band's native Newcastle: Blank Studios.

"King Of Cowards had been out around six months," Sam recalls. "The gigs we were doing were really stepping up with each tour. We were heavily in tour mode, so finding the time to write was a bit more tricky. We booked a couple of weeks at Blank to demo and write, and we already had the recording dates booked in! It was a really daunting prospect, starting the demo process on tracks that we knew in six weeks we'd be recording for an album. That was scary. But we knew what each other had in terms of the formative ideas, so there was a sense of understanding about how it might look and how it would work."

Operating on the boundary of such a delineated genre as metal presented the band with a familiar dichotomy. Sam reflects: "It feels like you have a fork in the road. You could go down one route and say, this band is heavy, ergo they're a metal band, and so let's make it sound 'metal.' There are established tropes in metal production, with an audience that often expects a particular sound. But then, there's this sense that when we write and play music together the driving force is about euphoria and catharsis, elevation; and volume and weight are just vehicles for that. We don't necessarily want to be in a 'metal band' per se, but we find ourselves in that space via means. If you want to be in a metal band, then you need to sound like a metal band."

Sam Grant: "The rules going into an album are really important, because in this day and age you can go so far in so many directions that you can lose a sense of direction really quickly."

Central to Sam's methodology is establishing a finite set of rules to govern the...