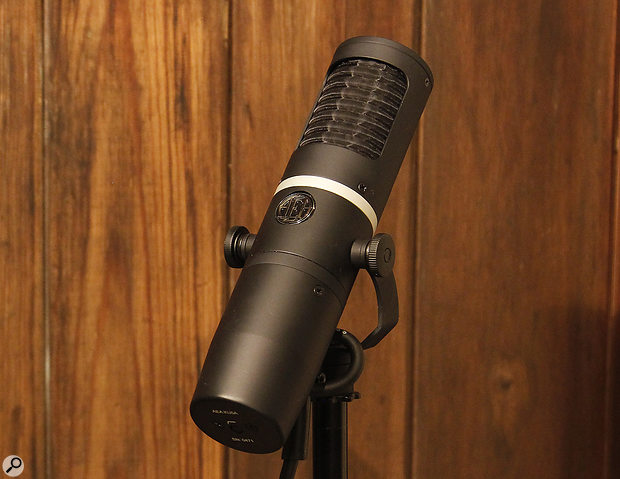 Nowadays, ribbon mics are often perceived as specialist tools for miking things like guitar amps, drum kits and brass instruments, but in their heyday, they served all sorts of applications. Ribbons were used for Foley capture, stage vocals, radio DJ miking, and there were even ribbon lavalier mics for TV interviews.

In many of these roles, the ribbon mic's native figure-8 polar pattern was more of a hindrance than a help, and manufacturers used all sorts of ingenious tricks to try to create a ribbon mic with a 'unidirectional' (cardioid) pickup. Mics such as the Western Electric/Altec 'birdcage' and STC 4033 tackled this challenge by combining a figure-8 ribbon element with an omnidirectional moving-coil capsule, while RCA's chief designer Harry F Olson did so using acoustic means.

The most famous of RCA's unidirectional ribbon mics are probably the iconic 77, with its mechanically switchable patterns, and the rare KU3A 'skunk mic', one of the best ribbon mics ever made. However, there's another, less well–known RCA design that now attracts a cult following. Said to have been designed, among other things, for recording gunshots for movie soundtracks, the BK5 was notable both for its somewhat cardioid pickup pattern and its ruggedness. On neither front does it score highly against today's mics, but what the BK5 does have is a very characteristic mid-forward sound. (Indeed, we often assume today that ribbon mics are universally dark and smooth, but unidirectional models all tend to be brighter and more mid-rangey.)

No-one knows more about RCA microphones than Wes Dooley, the founder of AEA. After many years spent servicing the originals, he eventually learned to make every single part of the classic RCA 44 and decided to introduce a modern version of it. This has been followed by original AEA designs such as the R84 and N22, and also by an equally meticulous recreation of the KU3A.

The latest mic to emerge from AEA's Pasadena HQ is a unidirectional ribbon that is designed to be robust, has the number 5 in its name and is housed in a large cylindrical metal body with radio DJ-style yoke suspension. However, the KU5A is meant less as a faithful recreation of the BK5, and more as a new design which takes that mic as its inspiration. It's not designed to share the BK5's unique tonality, but rather, to sound good in the same sorts of roles for which the BK5 was intended.

The KU5A is thus optimised for use close up and on loud sources, with a maximum SPL of 135 or 141 dB depending on whether you believe the spec sheet or AEA's website. There's no pad, but a button on the end of the mic engages a 6dB/octave high-pass filter turning over at 283Hz, for taming proximity effect when used up close. Unlike the BK5, the KU5A is an active microphone, requiring 48V phantom power and delivering a sensitivity of 7mV/Pa. The increased sensitivity compared with passive ribbon mics comes from the use of a custom-made, amorphous-core transformer with a 1:110 turns ratio,. This provides 12dB clean voltage gain but is not capable of driving the output directly, hence the need for an active unity-gain buffer amplifier. 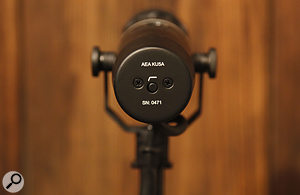 The KU5A has a switchable high-pass filter, which attenuates frequencies below 283Hz by 6dB/octave.AEA describe the KU5A as a supercardioid mic, but the detailed polar pattern in the specification suggests some variability with frequency, with the mic appearing perfectly cardioid at 2kHz and narrowing to supercardioid below this. At high frequencies the pattern seems looser and, being a ribbon transducer, somewhat asymmetric (presumably the two halves of the plot represent measurements taken at a 90-degree mutual angle, though this isn't explicitly stated). The on-axis frequency chart is also cheerfully uneven, with a peak at 2kHz, a dip around 4.5kHz and a fairly steep roll-off from about 9kHz upwards.

We were sent a pair of KU5As for review, housed in smart, lightweight and sensibly sized hard cases. As you'd expect given AEA's pedigree and the cost of the mics, build quality is first-rate, and there's something pleasingly businesslike about the KU5A's chunky metal housing. At 20cm in length and 8cm in diameter, it's not a small mic, and it weighs in at a substantial 1.2kg, but the built-in yoke holds it securely over a reasonably wide angle of adjustment. I'm on the fence about the 3m-long captive cable: it makes the mic super-quick to set up, but annoying to pack away, and in the long run, it presents another potential failure point. And to risk stating the obvious, it's also fixed in length, and I often found myself needing to extend it.

It's pretty obvious from the specs that the KU5A isn't intended as the last word in uncoloured sound capture: this is a mic that's designed to have its fair share of character. Importantly, though, it's not an out-and-out 'character mic' in the way that the BK5 is. With its massive 3kHz peak, rolled-off highs and non-existent low bass, the BK5 can be a great mic for guitar amps, partly because their bandwidth is restricted in a fairly similar fashion. On most other sources it delivers an instant '50s vibe which is more of a special effect than something you'd want to use all the time.

I think AEA have judged this design very well, creating something that can be used close up and in noisy environments, yet which retains the smooth, warm sound for which ribbon mics are often appreciated.

The KU5A is, to be blunt, a better microphone in almost every respect, and a much smoother-sounding one. Perhaps it's the form factor, or possibly the examples shown on AEA's website, but I came to view it as an excellent candidate for roles that the Shure SM7B usually fills. Ask a rock singer to scream directly into it from an inch or so away, and it'll shrug its shoulders and say 'Yeah, is that all you got?' On guitar amps, its 2kHz bump is often exactly what's needed, while its 4.5kHz dip tames the annoying unmusical hash that tends to accompany a good distorted tone. I liked it a lot on tenor sax, and it made an interesting snare mic that delivered a really meaty 'thunk'. Although the ribbon is well protected, AEA caution against using it inside kick drums, so I didn't try that.

Because the tail of the supercardioid pattern extends right down to 200Hz and below, some care is needed to avoid feedback in a live context, but the KU5A achieves the rare trick of being articulate without being bright. The subdued high-frequency response means off-axis pickup from cymbals and so on is actually quite benign, and certainly softer-sounding than it is on the SM7. There's enough proximity effect to be useful on thin-sounding vocalists, but not so much that you need to put the high-pass filter on for all close-miking situations.

With little usable frequency response above 10kHz or so, there's no getting away from the fact that the KU5A is a dark microphone by modern standards; nor does it display the sort of flat frequency response and uniform polar pattern you'd expect if you spent the same money on a stage capacitor mic. But you can't sing into a specification, and what matters is not how a mic performs in the test chamber but how it fares in front of musicians. From that perspective, I think AEA have judged this design very well, creating something that can be used close up and in noisy environments, yet which retains the smooth, warm sound for which ribbon mics are often appreciated. The KU5A is also, as far as I'm aware, the only mic of its kind on the market at present. Beyer used to offer a range of ribbon mics for stage vocal use, but the last of these now seems to have been discontinued, as has the Silvia Classics SC5C/Telefunken RM-5C.

That leaves the question of whether the KU5A's uniqueness and smooth sound justify its cost. The price is hardly surprising for a boutique product handmade to very high standards in California, but the fact remains that for all the KU5A's distinctive qualities, its intended roles are already filled very well by more affordable mics. If you're satisfied with what you get from a high-quality moving-coil design such as the SM7 or RE20 on vocals, guitar amps and so on, it might be hard to contemplate shelling out three or four times as much to add a KU5A to the locker. That, of course, is your call, but what I can be pretty sure of is that if you do get a KU5A, it won't spend much time sitting idle. It may be pricey, but it's also a seriously useful mic.

The KU5A combines classic 'ribbon mic' tone with a supercardioid pickup pattern and stage-ready robustness — but it ain't cheap.