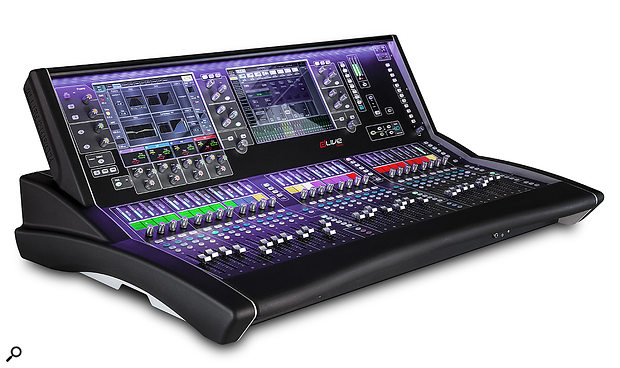 When you're thrust into the driving seat for a tour with Scotland's biggest rock band, you need a desk that's not only powerful, but also quick to learn and easy to use. Enter Allen & Heath's flagship live mixer...

I'm known as a fan of analogue desks, but needs must, and when a tour came in where the only practical choice was digital, I looked around for what to use. There is a fair selection of choice in the upper end of the market and as the shows were headline festival slots, I had the luxury of being able to choose from any of the more commonly available desks.

Having recently been out on a small theatre and club tour, picking up a different desk every night, I had already ruled out some models. I won't name names, but some I didn't like the sound of, while some I found just lacked the flexibility and power I needed. In the end it came down to just two or three choices. And when a colleague phoned me up having just got back from a tour raving about the Allen & Heath dLive, it tipped the scales.

I have to say that I do have a relationship with Allen & Heath. I have lent them some of my effects units and mic preamps to be modelled. In return, they loaned me a mixer for a tour to mix effects returns. It was the entry-level Qu–Pac, and it was so simple to use. Even better was that everyone said that the dLive shared its sibling's simple user-friendly interface — see the 'Perfect Harmony' box. I had never mixed a show on an Allen & Heath digital console, however, so it was a leap of faith, but one I was willing to make, with some reservations.

As an engineer who rarely gets any pre-production time, I needed a console that I could get to grips with quickly. I was going straight into a festival run with Scottish rock giants Biffy Clyro, whom I had not worked with before, so I had to be confident I could achieve a mix quickly, and one that matched the band's and my expectations. So I headed down to Allen & Heath's HQ for a day with the dLive, a hard disk of live tracks in my bag.

Allen & Heath are based in Penryn, Cornwall, where they have a nice modern facility that houses the offices, R&D, and some manufacturing. The main manufacturing is based in China, but tightly controlled from the UK. I was greeted by Lead DSP Engineer Anthony Evans, who ushered me into the mix room, a curtained-off office deep in the building, with a small PA system and a dLive S5000 for me to try. After a bit of almost inevitable messing around with networking we had connected my MacBook Pro to the desk and set it up in 'virtual soundcheck' mode. For those of you unfamiliar with the concept, a virtual soundcheck allows you to record the desk channels via a network such as Dante or, in this case, Waves SoundGrid, onto a laptop. This recording can then be played back through the same input channels, allowing you to seamlessly switch between recorded and real-time inputs. This is invaluable when you don't get enough time with the actual instruments, such as in my case where there would be little or no time for soundchecks. 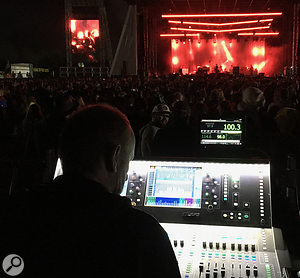 The dLive S5000 getting a workout with Biffy Clyro at Indie19 festival, Ireland.Using a show recorded the year before by the band's previous engineer, I was able to patch the channels to the desk as I would when doing it live. Patching the dLive is easy. A dedicated I/O button on the surface opens the patching window. This tells you which stagebox is connected — in this case a DM64 stage rack, which gives you 64 mic/line inputs and 32 outputs. The DM64 also has three card slots, one of which was taken up with the Waves V3 SoundGrid network card that we were using to connect my laptop. Patching takes place in a standard grid–style page, but that page is easily zoomed in on if, like me, your eyesight is not too good, or you have sausage fingers! This is all done through the right-hand touchscreen.

It is best practice to name channels and outputs before patching and this can be done either on the I/O page or via the channels. I had actually prepared the patch and named the channels using the free offline editing and control software Director at home to save time. My basic show loaded, I was ready to start listening to audio.

The dLive's strength, for me, is the ease of setting up. Everything is pretty much where you think it will be, the surface is sparse but functional, and there are enough shortcut buttons to get to where you need reasonably quickly. All models in the dLive series share much the same surface controls, but with the larger models giving you more faders, screens and a bit more direct control. I had opted for the second–largest frame size, the S5000, which gives you 28 faders and dual 12–inch capacitive touchscreens. I wanted a reasonable number of faders and this seemed a good compromise between size, weight and features.

The desk comes with various templates that give you a starting point for how to set up the desk. "Templates for what?" you may ask. Well, the surface has 28 faders and 26 soft keys that are fully assignable, and you need to tell them what they are, either by loading one of the ready-made templates or building up from scratch. I opted for a FOH template that gave me a good starting point, with roles assigned to all the faders, and the faders laid out in banks. Under the left screen are 12 fader strips, and each of those has four soft keys, a single rotary, an LED meter and a mini display screen providing channel/fader information. The next bank has just eight faders, laid out in a similar fashion, and to the right is another bank of eight. Between the banks are more soft keys that give you direct access to different layers. The concept of layers is a common one but in case you haven't used a digital desk before, it's like having...