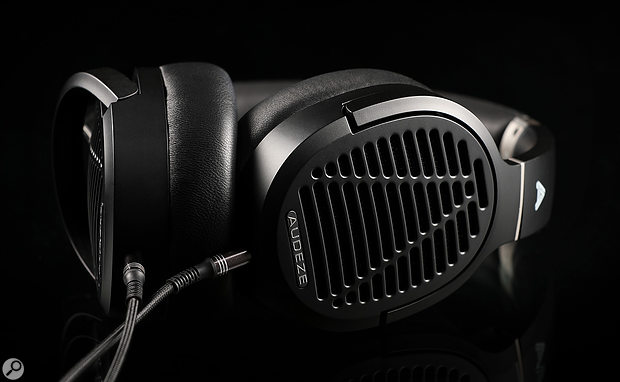 A tried-and-tested way to build a manufacturing business is to start at the top. If you can establish a reputation for innovative high-end equipment, you're in a good position to exploit the resulting technological know-how and branding collateral when you move into the mass market. It's a strategy that has paid off for the likes of Focusrite and PreSonus, and it seems to be the path that Audeze have chosen too.

Established by Dr Drag Colich to commercialise his breakthroughs in planar magnetic driver technology, Audeze have gained a passionate following for their premium LCD range of headphones. These are popular both in the hi-fi world and amongst well-heeled studio engineers, and I count myself among the fans. Models such as the LCD-X and LCD-MX4 are notable for several things, including their stellar low end, but to my ears their most remarkable feature is their presentation of musical dynamics. Drums are put across with a level of punch and impact that I've never heard on any other headphones, and this doesn't just make music more involving to listen to: it also makes it much easier to reliably judge drum levels and compression settings in a mix context.

However, existing models in the LCD series are undeniably pricey, and they are also bulky and heavy. Even if you're willing to take a £$1k+ pair of headphones on the road, it's not always feasible to schlep a large Peli case around with you; and although the LCD-Xs are well padded, not everyone enjoys having so much extra weight clamped to their heads.

The Power Of One

The new LCD-1s will thus seem like manna from heaven to those who have coveted Audeze phones but found them unaffordable or impractical. Audeze already make a lower-cost model called the Mobius, but that is targeted primarily at consumer markets. The LCD-1s are explicitly billed as being "for mixing and mastering applications", and whereas the LCD-Xs cost close to £1500$2000, these retail at a relatively bargainacious £$399. What's more, they are no larger or heavier than a typical pair of moving-coil headphones, and fold down neatly into a semi-rigid carry case that you can take practically anywhere.

Like most Audeze models, the LCD-1s are open-backed, passive headphones. They are much smaller than the other LCD models and their physical design is a lot more conventional, with rigid plastic earcups mounted on a padded plastic headband. The earcups can rotate both up and down and fore and aft; they are padded with memory foam covered with "genuine lambskin leather", and as the LCD-1s weigh only 250g, it's easy to achieve a comfortable fit. With so much plastic used in the design, however, they certainly don't have the same luxury vibe as the LCD-Xs, and come across as being rather basic even in comparison to other headphones in their own price bracket. They are supplied with a Y-shaped straight cable that attaches to both earcups using mini-jacks, and which always delivers the right channel to the right earcup regardless of which way round you connect it.

Audeze have put a lot of work into ensuring that their newer models work well with low-power sources as well as with hi-fi headphone amps, and that shows in the LCD-1s' specifications. With a nominal impedance of just 16Ω and a sensitivity of 99dB/mW, they're plenty loud enough when driven from laptops and smartphones, and Audeze claim a TDH figure of less than 1 percent. They state the frequency response as extending from 10Hz to 50kHz, though no tolerance is given.

The larger LCD models have a tonality that could be described as relaxed, with no obvious presence boost in the upper mids, nor any 10kHz peak as found in many moving-coil designs. This smooth and slightly understated treble no doubt plays a part in allowing the bass and mid-range to shine so spectacularly, but in a mixing context, it can occasionally lead you to underestimate things like tape hiss or vocal sibilance, which might be more apparent on other monitoring systems.

The LCD-1s easily hold their own against open-backed moving-coil designs in the same price bracket, and they have a tonal character that is arguably even more appropriate for mixing than that of the larger LCDs.

In comparison, the LCD-1s are noticeably more lively, with the presence region being quite a bit more prominent and the middle part of the mid-range a bit less so. They are by no means bright in the scheme of things, though, and the vast majority of moving-coil designs have a treble boost that is both more obvious and less benign. Of all the other phones I compared them with, the LCD-1s were perhaps closest tonally to my Shure SRH1840s, which have always seemed to me to have a pretty well judged frequency balance. If anything, the Audezes sounded slightly scooped in comparison, with the Shures having more edge in the 2-3 kHz region and the LCD-1s offering richer bass and a little more 5kHz sparkle. This sort of A/B test also highlights the low distortion that is characteristic of a good planar magnetic design: everything seems somehow smoother and less gritty on the LCDs.

In short then, I think the LCD-1s easily hold their own against open-backed moving-coil designs in the same price bracket, and they have a tonal character that is arguably even more appropriate for mixing than that of the larger LCDs. What they don't have, though, is that unique dynamic quality that sets the LCD-X and related models apart. Playing a rock track with pounding drums through the LCD-Xs is a thrilling experience; you can almost feel the air move as toms are thwacked and snares are pummelled. Switch to the LCD-1s, or indeed any other headphones, and it's as though someone has strapped a brick-wall limiter over the mix bus.

Still, if you buy a Squier Strat, you don't expect it to sound exactly the same as something from the Fender Custom Shop, and ultimately, the LCD-1s need to be judged against competitors in the same price bracket. On this count I think they perform very well indeed, with the major added bonus that they are genuinely portable. If you're in the market for a serious pair of open-backed headphones, then you need to hear these...

With the first affordable headphones in their LCD series, Audeze have thought hard about the needs of mixing engineers. The LCD-1s don't quite have the unique punch of the larger models in the series, but they still sound mighty fine, and you can take them anywhere!