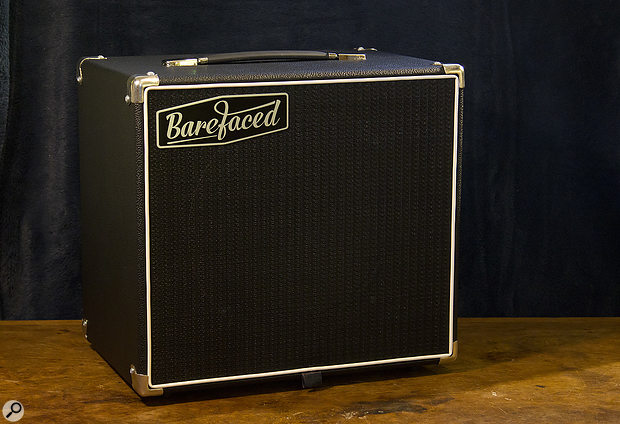 Surely there is nothing new to be done with the design of the humble guitar speaker cabinet? Well, actually, it turns out there is, and our reviewer doesn't think he'll ever want to use an 'ordinary' cabinet again!

Electric guitar players are a notoriously conservative bunch, with so many of the 'classic tones' seemingly thought to reside exclusively in the guitar and amp designs of the 1950s and '60s. But whilst some of that outlook may be slowly changing with the advent of ever-improving digital technologies, the design of the humble guitar speaker cabinet — still often the ultimate generator of the actual sound — has remained largely unchanged for half a century. The performance of bass-guitar speaker cabs has been vastly improved in that time, and PA speaker cabs have been reinvented beyond recognition, but the design of guitar cabs, with a couple of honourable exceptions, have remained a choice simply between open- or closed-back.

Experienced guitarists have an innate understanding of what each configuration offers, and often a preference for one or the other, but neither could be said to be really optimised for the task at hand, both having arisen out of pure pragmatism. The open-back configuration of all classic combo designs was adopted primarily to offer ventilation for the integrated amp chassis and easy access to the tubes for maintenance. But the sound coming out of the back of an open-backed combo is 180 degrees out of phase with the sound coming out of the front of the cab, and whilst the short wavelengths of mid and high frequencies will reflect around the room a bit and combine usefully with the sound from the front, longer wavelengths will simply wrap around the cabinet and cancel out the frontal output. So, you can have a degree of dispersion but at the expense of losing a significant amount of bass.

As amps became larger and louder with more output tubes, they needed to be housed in separate enclosures, and designers took the opportunity to move to closed-back cabinets to improve the low-end response. Handling the power of the bigger amps, however, also required the cone drivers available at the time to be used in greater multiples, and thus the classic closed-back 4x12 was born. But now we have a different set of problems: the sound from the back of the speakers in a closed-back cab has nowhere to go other than to vibrate the cabinet and, to a lesser degree, interfere with the movement of the speaker cones themselves, thereby colouring the sound. Perhaps just as significantly, however, the acoustic coupling of the multiple drivers in the cabinet results in an ever-narrowing dispersion at higher frequencies, especially the ones we are interested in as guitar players.

The challenge, then, is to design an enclosure that has the useful dispersion of an open-backed cab, but with the bottom-end extension and punch of a closed-back cab. Of course, there are any number of things like horns, waveguides, acoustic lenses and so on that could be used to affect and improve dispersion, but remember what I said about the essential conservatism of guitar players at the outset: all of those will change the sound of the speakers they are employed with, and not in ways that guitar players would find beneficial. Barefaced Audio Managing Director and Chief Engineer Alex Claber started out designing compact bass cabs that sounded bigger than they looked like they should, and his business soon established a reputation for doing innovative things with cabinet designs. His researches, part scientific and part empirical, over several years led him eventually to his patent-pending invention of the Augmented Vent Diffractor (AVD) featured in the 1x12 Reformer model on test.

All the AVD 'action' is round the back — from the front it just looks like a normal cab. At the back you will see two angled baffles that create a narrow vertical slot at the opening between them in the centre of the back of the cabinet. At low frequencies, this acts as a Helmholtz resonator (a tuned port), whilst at mid and high frequencies it works as a diffractor, creating dispersion. Bareface say you get "twice the output of a closed-back cab with an identical speaker and even better dispersion and audibility than an open-backed cab". I'd say that's about right! 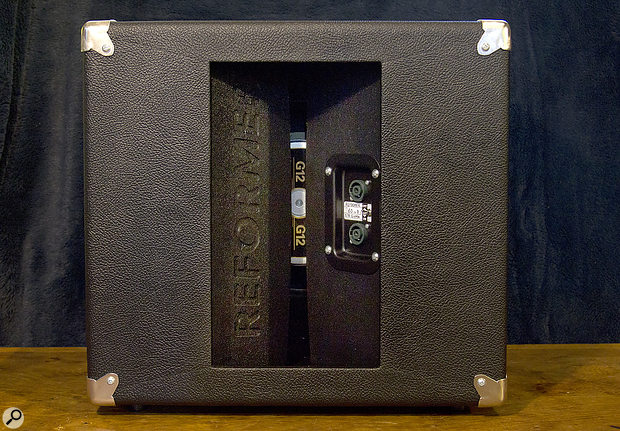 Where the magic happens: the two angled panels form an efficiency-boosting Helmholtz resonator at low frequencies, while diffracting the speaker output at higher frequencies to 'fill the room' more than a conventional cab.

This cabinet is also unusually lightweight (22lbs), with its 3/8-inch panels being half the depth of those typically used in speaker cabs of this size. The internal baffles and strategically placed bracing, however, seem to result in a box that is both stiffer and less prone to rattling at high volume than one made of heavier material.

The end result is a sound that is bigger, deeper, wider and louder than any other 1x12 I have ever used.

The end result is a sound that is bigger, deeper, wider and louder than any other 1x12 I have ever used. It is still a single 12-inch guitar speaker, so it will 'beam' a bit across the front, but that is now mitigated by the enveloping, room-filling quality of the sound from the rear integrating with the frontal output. Positioning a guitar speaker to fill a room on an 'un-miked' gig is a bit of an art, and you can still see far too many players cranking up the treble to hear themselves clearly with a cabinet that is firing past their knees whilst lasering a hole in the front row. Some common-sense placement is still required — tilting back is always a good idea — but with an AVD cab, you've got a lot more leeway because the sound is already more diffuse.

Some placements of an AVD cab can actually result in there being too much extra bottom-end, and this is obviously something the manufacturer discovered in testing, too, because this cab features a high-pass filter. It's very gentle but effective at just tightening and cleaning up the bottom end. It can also give you a bit of power-handling safety margin on a loud gig by relieving the cone of a bit of the wide-excursion stuff without affecting the overall sound too much.

Barefaced cabinets are made to order, taking typically about three to four weeks, and you can specify a choice of Tolex colour (black or green) and grille cloth preferences, along with your choice of speaker. The review model came fitted with a Celestion Vintage 30 — not normally one of my favourite Celestions, but here a perfect complement to the bigger, deeper sound of the AVD cab. You can, however, order a Barefaced cab with any other Celestion 12-inch model you prefer. You can't get an AVD cab empty though — I guess the Barefaced guys want to be sure that they are selling you something that they know will exhibit the expected performance, which is perhaps understandable, if a little frustrating for those like myself with a stack of suitable 'spare' guitar speakers!

Of course, Barefaced aren't the only people to have ever engaged in further development of guitar speaker cabs — Mesa Engineering gave us the extended low-end of their renowned Thiele cabs, and the Nashville-based 3rd Power company in particular are doing interesting design work to eliminate the coloration of cabinet standing waves, for example — but the performance of an AVD cab really is startlingly different in a side-by-side comparison with a conventional design! It is great to see that there is still worthwhile innovation possible in even the fundamentals of the electric guitar world!

A lightweight guitar speaker cab, featuring the innovative design of the Augmented Vent Diffractor to make it sound bigger, wider and more balanced than conventional designs of open- or closed-back cabinets.