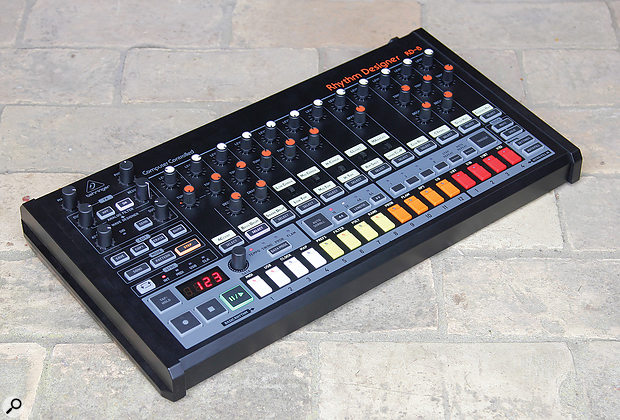 Behringer's RD‑8 is a cut-price recreation of Roland's classic drum machine. We put it to the test...

I have to be honest, although I knew there was a buzz around Behringer's 808 reboot I hadn't paid it much attention before one turned up at my front door. Don't get me wrong, the 808 is everything: hearing Cybotron's 'Clear' on the electro mix tapes that circulated at school was like stumbling into a portal to a new world.

A generation or more on, the dominant musical styles of our time still build on a foundation of 808 kicks, snares and hats. I just assumed that today's producers would be indifferent to where those sounds were coming from, or would be happy with the convenience of Roland's digital recreations. I was wrong; how many products generate a 150+ page Gearslutz thread before they ship?

The RD‑8 is a true analogue recreation of Roland's classic drum machine. As such it's not really stepping on the Japanese giant's toes. Roland have their miniature digital reissues, and modern drum machines like the TR-8S, which model those iconic sounds. What's more, several other analogue 808 clones are extant.

I can't pretend I didn't feel a bit of a thrill of setting a drum machine with the actual physical presence of an 808 on the desk. It's big, but for an instrument that you can actually perform with (and connect a nest of quarter-inch jacks to) it feels about right. The knobs, step buttons and font give it that unmistakable Roland look, though Behringer have playfully inverted the colours.

The build is reasonably solid, and the step buttons are satisfyingly clicky. The only things that feel a bit plasticky are the knobs. Given that this is an 808 tribute costing a third of comparable alternatives (and a tenth of an original) I'm not complaining. I will grumble, though, that Behringer have made the knobs quite stiff to turn. Perhaps this is an attempt to make them feel a bit more luxurious, but when performing I want to be able to crank the knobs quickly, not fight them.

The real surprise was how much of the panel is different from the 808. Alongside the step switches and the knobs is a host of backlit rubber buttons of the kind you'll find on many modern music tech gadgets. The original's sound selector dial is replaced by dedicated channel select pads. The sequencer mode dial is also gone. This was the point at which the penny dropped for me. Behringer haven't set out to make a straight clone, they've made a hybrid of old and new: the original analogue drum synths with a reimagined performance and sequencing system.

Having got my bearings I decided to jump in and have a listen. Hitting the Play button brought no result: there were no preset patterns in memory. No problem, let's call that refreshing and move on. Manually triggering sounds works just like on the original. Whichever sound is selected can be played via the single Trigger pad.

It's a shame that Behringer didn't make it possible to finger drum on the channel selector pads. However, the RD‑8 can be played live from external MIDI sources. Notes hit hard (over velocity 110) are treated as Accented triggers, and you can record directly into the sequencer, something you can't do on the Boutique TR-08. Anyway, before we get into all that, how about those sounds?

The RD‑8 has the same set of 11 channels as its inspiration, with a total of 16 drum synth models. The sounds are close recreations of the originals, and some have extra controls.

First up is that all important bass drum channel, which has the classic Tone and Decay controls but steals some panel space from the neighbouring Accent section to add a Tuning knob. Tuning covers about an octave of range, with the original pitch at around the 10 o'clock position. (Eagle-eyed readers may have spotted orange dots by all the new controls. These indicate the settings that dial in the original sounds.) The decay can go longer than the original, so this is more like an 808 with the celebrated decay mod.

The kick really does the trick, and is especially magnificent pitched down. It's smooth and punches the air with that elusive rumble even on smaller speakers and headphones. A couple of notes: first, it can go super loud compared to the other channels — maybe that's by design. Second, if you play triggers in quick succession, occasionally one will get kind of clipped, losing its decay — something the original was also prone to. I think it would have been awesome if Behringer had provided MIDI note control over the Tuning, giving you a real analogue 808 bass.

To my ears the snare is indistinguishable from that of a pristine 808. The snap is as bright and scratchy as you could need, and the body portion of the sound has that authentic tubbiness. I just wish they'd added a decay control: short 808 snares are in vogue, and this is something the TR-08 can serve up.

The three toms have that lovely dusty low end; warm and true to the original. The congas however are more of a straight pure tone than on the 808, with a less pronounced pitch envelope. I much prefer the RD‑8 version! While scrutinising the Tom/Conga channels I noticed they emit a low level resonant hum at all times. This only tends to be noticeable while adjusting the tuning.

On the Rim/Clave channel, the rim shot wins the authenticity battle with its brilliant clear crack. The claves are quiet by comparison, and are slightly shorter and lower in pitch than on a typical 808. They are closer to a straight click/stick sound than the original's characteristic 'pwee'.

Behringer have modded the clap patch with an Offset control. This adjusts the sound balance between the bright, flammed noise portion and the softer reverberant tail. It's a useful addition which makes the clap more versatile, and is fun to tweak in builds and fills.

The RD‑8's take on the world's most famous cowbell is unmistakably an 808 cowbell, but is different if you A/B old and new. The RD‑8's is noticeably lower in pitch, and its constituent tones are more detuned. It's the same story with the cymbal: lower in pitch, with more dissonant harmonics. They might not satisfy purists but I rather enjoyed the wonkiness of them.

The hats show that analogue warmth does not mean you have to lose high end. They have plenty of sharpness if you want it (you can filter with the additional tone control) and have a certain impact and presence. They are not perfect copies of the original, but they wipe the floor with hats on the Roland Cloud 808 plug-in.

The 808's 16-step trigger sequencing concept is a design classic, but most aspects of its operation are notoriously tricky to understand. As Behringer have overhauled the sequencing side of the 808, presumably aiming for something more intuitive, I was curious how far I could get without resorting to the manual. Not very far at all, it turns out.

When I hit Play there was no sign of life, and pressing step buttons didn't seem to do anything. OK, got it, I was in Pattern mode where the buttons recall patterns. I needed to switch to Edit mode, the equivalent of dialling from Manual Play to Pattern Write on the 808. Now I got running lights, and could enter trigger steps. But... they disappeared after one bar! Time to take the walk of shame to the manual. Ah, Record needs to be armed to enter notes, otherwise they are just one-off trigs.

After this bumpy start things went more smoothly. Triggers can be entered on the step buttons one sound at a time as expected. The Accent track adds steps of higher level and intensity. The Pattern can be extended up to four bars (64 steps), and you can bank your view between the bars via dedicated buttons, or enable Auto Scroll. One thing that kept throwing me off when entering patterns is that the graphical section outlines above the steps are divided differently to the original. The 808 has a break that serves as a visual cue for where step 9 is. On the RD‑8 a similar break is one step later.

Patterns can be tapped into the RD‑8 in real time via the Trigger pad, albeit one sound at a time. This is my preferred method on both this and the original. Everything is quantised and, unlike on the TR-08, there's no facility to push notes off the grid into substeps. You do get Swing, though, which was absent on the 808.

Figuring out how to save my work required another trip to the manual. You need to hit Save, then choose a slot to write to, then hit Save again. Despite following the manual I couldn't get it save to any other slot than the current one. To drop your pattern into a different slot you can Copy, which again is a rather obtuse process.

Surely only serious collectors would now opt to pay more than 10 times as much for the original?

The memory structure is far from clear but I kind of figured it out. Patterns are stored in groups of 16 in 'Songs', which are also, in a sense, banks. Patterns can be triggered manually within the current Song. (You can't access Patterns stored in a different Song without stopping playback). There's a (confusing) process for making an actual song within the Song (still following?). You essentially create chains/playlists of Patterns, which will play back in sequence in Song mode if Auto-Scroll is on in both Pattern and Song modes! I think.

A couple of other places I got stuck: you can create patterns in several slots within a Song, but they are not stored until you deliberately save them. Forget this and change Song (or power down) and all is gone. Also, Song, Pattern and Step modes all have their own Record modes. If Record is active in Step and you change to Pattern, Record remains armed but you can't see it. The Trigger button (or incoming MIDI) will continue to write into the active pattern. This is cool if you know about it but it confused the hell out of me at first.

Despite the hiccups, the Pattern creation process is of course simpler to pick up than on the 808. While you can make a 64–step pattern on an 808 it requires learning (usually re-learning) how to write a two-part pattern with A and B variations. The thing is, though, while Behringer have made a modern sequencer, it's also quite confusing to use, and throws the baby out with the bath water. Yes, the 808 was a nightmare to learn, but features like the A/B variations were useful. The biggest loss is real–time song arrangement. The 808/TR-08 have a song write mode where you simply perform a series of pattern changes and Fills and the sequence will be captured and stored. I would much rather do this than assemble a chain offline.

Fills are handled in an 808-ish way: they're created as separate patterns in slots 13-16 in each Song. They can be any length but work best if you keep them short, say one or two beats. Hitting the fill button slots the fill in at the end of the next bar, and automatically fits it in to end at the right point. The 808's Auto Fill mode, which automatically drops fills in at the end of a set amount of bars, is unfortunately not present.