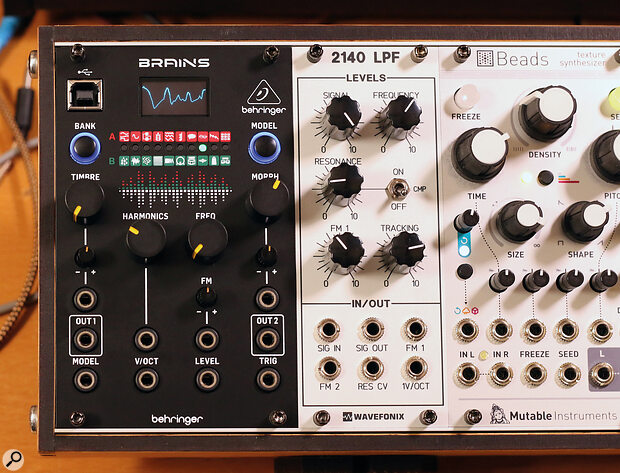 After recreating the Moog modular, Roland System 100M and ARP 2500 modules in Eurorack form, Behringer decided to tackle something more modern in the shape of a multi-engine digital oscillator module. Behringer call it BRAINS, which is perhaps a slight adjustment to Braids, which became Plaits from Mutable Instruments: a versatile digital oscillator with 16 synthesis models. Mutable Instruments made the firmware to these modules open source and available to be used commercially by anyone. Many Plaits clones have been made by boutique Eurorack companies, and Arturia used some of the algorithms in their MicroFreak synthesizer. BRAINS is essentially Behringer’s hardware wrapper for the Plaits software, alongside a few interesting developments of their own.

I’m pleased to say that in real life BRAINS is much more handsome than the rendered images Behringer use on their website. The colour contrasts are better, the black is deeper, the lights around the Bank and Model buttons are cooler and the display is really quite delightful. The USB socket stamped on the front feels out of place and detracts from an otherwise good-looking module. Apparently the USB socket is for firmware updates, but why it couldn’t be hidden away around the back like any other module is anyone’s guess. We are very comfortable with unscrewing modules for the occasional update...

BRAINS comes with 15 algorithms from the Plaits ranging from virtual analogue to wavetable, FM, noise and granular through to percussive and harmonic sounds. The three knobs, Timbre, Harmonics and Morph, take on three parameters for each algorithm and generally do something in the region of what their name suggests. Out 1 contains the main output signal whereas Out 2 carries an alternative or variant for a different flavour of each sound. It has a built-in low-pass gate with a trigger input to ping the sounds, which lends a distinctive and familiar bleepiness.

BRAINS offers a lot of tonal possibility and interest. It would make for a brilliant starter oscillator for any system, and would be a great addition for anyone wanting to broaden their sound palette.

Behringer have added four new algorithms to the menu and their own version of the Karplus Strong algorithm. The Supersaw is really nice especially when running free as a regular oscillator rather than being triggered through the LPG. The sound is thick and luscious, and you can dial in a sub‑oscillator, further harmonics, increase the waveform count and do some detuning. The FM Drum has got a good range of tones from zappy to squelchy. The Cowbell is more reminiscent of Super Mario arcade sounds than percussion, but the Toms algorithm has some interesting grit to it when pushed.

The display is a welcome addition to the module and is useful for understanding the waveforms and visualising what’s going on. It works really well and is a great companion to droning, although when you get to playing, sequencing or triggering sounds it does feel a bit sluggish — not on the money like an oscilloscope would be.

Comparing it to the Plaits the features, knobs and patch points are the same with a slight reordering of the layout. You’d expect the output of the algorithms to be identical because they are using the same code, but they’re not quite. When I first tested BRAINS, I found quite a bit of crackling and artefacts in the background but after the latest firmware update (via the handy USB port) this has largely but not entirely been remedied. The firmware also increased the output sample rate to 96kHz as opposed to 48kHz on the Plaits, although the Braids was 96kHz. It has an overall harsher/brighter sound with a lot more top end, which may be a result of the sample rate increase, so you could say the Plaits sounds a little duller in comparison. Another noticeable difference is when using the trigger input the low-pass gate has a slightly longer decay.

BRAINS offers a lot of tonal possibility and interest. It would make for a brilliant starter oscillator for any system, and would be a great addition for anyone wanting to broaden their sound palette. While it doesn’t match the pristine output of the Plaits, or the elegance of the styling, it is considerably cheaper and offers a few more sounds.