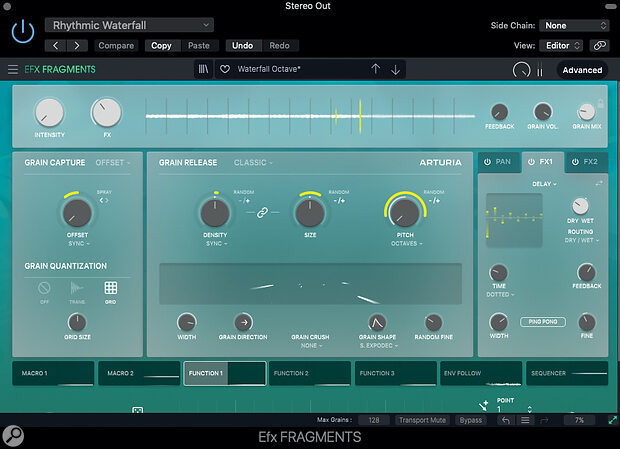 Arturia’s Efx Fragments, which supports all the common plug-in formats on Mac (10.13 and above) and Windows (64-bit, 8.1 and higher) operating systems, is a granular effects processor that can create effects ranging from obvious glitchiness to ethereal ambiences. The audio input is fed into a buffer but unlike a delay, where the buffer mirrors the incoming audio, with granular processing it is possible to modulate both the playback and recording points, adjust the buffer length, vary the feedback and even to freeze the buffer contents to produce a continuous sound. The resulting slices of sound can then be processed via effects such as pitch shifting, reverb, delay and resonant filtering.

There are three granular release modes (Classic, Texture or Rhythmic), which work alongside filtering, modulation and pitch manipulation effects. Grain capture may be set to Speed, Offset or Manual Scan. Rhythmic mode responds to the rhythm of the incoming audio or DAW tempo, and there’s a step sequencer, which is particularly useful for adding interest to looped beats or percussion. If something more subtle appeals, then there are lots of textural processing options in the Classic and Texture modes — these can add interest and enhancement without sounding aggressive. Add in the effects section and you have a universe of shimmering, crystalline sounds.

The GUI is divided into logical sections, with Intensity and FX macro controls to the left of a buffer waveform display that shows where the granular processing is taking place. White sections relate to the record ‘head’ while yellow relates to playback functions. A trippy 3D visualiser is shown in the Advanced view. The buffer can be set from one eighth of a bar to four bars, and there are controls for Feedback, Grain Volume and Grain Mix. In the middle section are controls relating to the Grain Capture and Grain Release functions, as well as tabbed sections for the Pan, FX1 and FX2 controls, visible when Advanced is selected. A horizontal row of tabs below the centre section select Macro 1, Macro 2, Function 1, Function 2, Function 3, Envelope Follower or Sequencer. The lower section of the screen shows the detail for the currently selected tab along with a setting for the maximum number of grains, and the grain quantise options.

If something more subtle appeals, then there are lots of textural processing options in the Classic and Texture modes.

Macro knobs Intensity and FX can control multiple parameters, and they can be renamed, but it’s also possible to assign the three function generators, the envelope follower or the sequencer to certain parameters. Parameters eligible for control have a collar around the knob that can be dragged to cover the required range when Assign is clicked.

There’s a lot to explore here but there’s also a lot of scope for simply modifying the presets to see what happens. I found Fragments to be genuinely inspirational and capable of creating some truly beautiful textures, as well as subliminal rhythms or splashes of dramatic glitchiness. There are many parallels with Output’s Portal but, somehow, the results sound different enough that both have their own character. I think this is one of those plug-ins that you’ll simply not want to stop playing with.