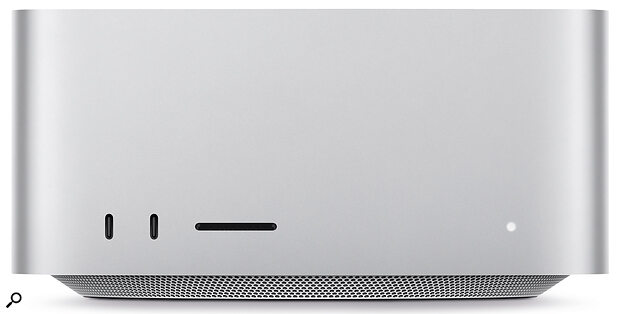 Is Apple’s Mac Studio the perfect computer for the studio?

Apple users with long memories will remember the stunning, fanless PowerMac G4 Cube. Launched back in 2000, the Cube ended up being too limited for professionals and too expensive for other users, and was discontinued after just one year. However, Apple persisted with the idea of a miniature desktop machine, and four years later, the Mac Mini saw the light of day. It’s been a great success, and is widely used in music studios, but is there still room for a more pro‑oriented compact machine? Apple obviously think so, and the result is the Mac Studio.

Hip To Be Square

To cool the inside of the system, Apple’s engineers have once again created a unique and innovative thermal architecture, parts of which are visible from the outside. Using a double‑sided blower (more commonly found in fireplaces), air is pulled in through the perforated circumference around the base of the enclosure and guided over the circular power supply to the chip’s thermal module. The warm air is then pushed out the back of the machine, through over 2000 precisely machined perforations, by a low‑impedance rear exhaust. 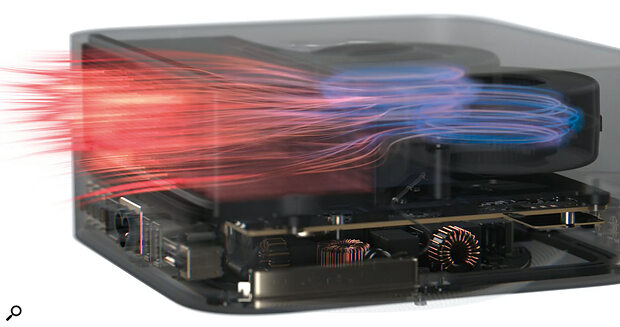 The Mac Studio’s cooling system pulls air into and across the system from the bottom of the enclosure, before pushing it out of the rear exhaust.

Given that the M1 series of chips are already designed for energy efficiency, this means the system is barely audible in use. So much so, in fact, that according to tests compliant with the ECMA‑109 standard (for “Declared noise emission values of information technology and telecommunications equipment”), the Mac Studio emits only 15dB SPL as measured from the operator’s position. To put this in context, if you remember those charts you were shown at school, 15dB is between the sound of calm breathing or leaves rustling (10dB) and whispering (25dB).

I don’t recall ever hearing any audibly obtrusive fan noise during the test period, even though the Mac Studio was placed on the desk in front of me. It simply didn’t seem interested in pushing any air though the system, whether I was running Geekbench tests or even when trying to play back a complex Pro Tools session. The only time I really got it going was running GFXBench, which throttles all the GPU cores on the chip in a manner that music and audio software does not. Some users have reported issues with persistent fan noise, but this didn’t seem to be a problem with the test machine, and I wouldn’t be afraid to use it in a live room with a musician.

Putting The ‘A’ Back Into USB

Given the physical similarities, it makes sense that Apple would use the Mac Mini’s connectivity as a starting point for that of the Studio, and that is exactly what the company’s engineers have done. On the rear you’ll find four USB‑C connectors supporting Thunderbolt 4 (allowing for speedy data transfer of up to 40Gb/s), DisplayPort (up to 6K resolution), USB 4 (also up to 40Gb/s), USB 3.1 Gen 2 (up to 10Gb/s), and a maximum of 15W for supplying power to bus‑powered devices. Joining the USB‑C ports are two USB‑A connectors supporting up to 5Gb/s for MIDI interfaces, dongles, other input peripherals and anything else you might need it for. 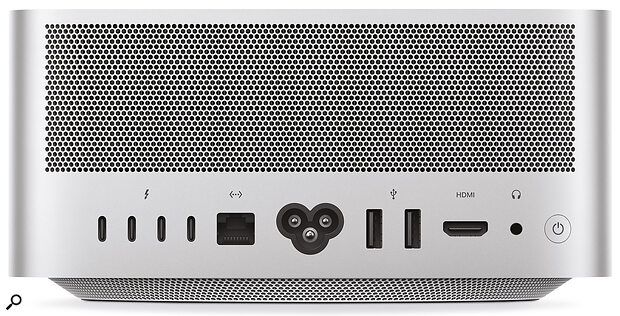 Rear panel: Good news, folks: ports are back! Even the venerable USB Type A port, long since considered an endangered species.

With the combination of ports and the graphics processing capabilities of the M1 Max or Ultra chip, it’s possible to connect a maximum of five external displays to the Mac Studio, pushing nearly 90 million pixels! Each of the four Thunderbolt 4 ports can be used to drive a display with a maximum 6K resolution, such as Apple’s own Pro Display XDR, and there’s also an HDMI port (as on the Mini and the 2021 MacBook Pro models) that supports an additional 4K display. This is useful if you want to use a separate display, like a TV, to show picture if you’re working on a project with video assets.

The Mac Pro offers dual‑10Gb Ethernet networking, and it would have been nice if this had carried through to the Mac Studio, but there’s just the one 10Gb Ethernet port as standard. It also features the same wireless networking capabilities as the MacBook Pro, with support for Wi‑Fi 6 (technically known as 802.11ax, which is compatible with the earlier 802.11a/b/g/n/ac standards) and Bluetooth 5.

Completing our tour of the Mac Studio’s rear is the 3.5mm audio jack for attaching headphones or active speakers. As with the most recent MacBook Pro models, this audio output supports both high‑impedance headphones and a true line output.

When Apple launched the new 14‑ and 16‑inch MacBook Pro models near the end of 2021, it was revealed — after much speculation — they were to be powered by two new members of the M1 SoC family: the M1 Pro and the M1 Max chips.

The M1 Pro was a natural evolution from the original M1 chip Apple launched the year before. Where the M1 had an eight‑core CPU comprising four performance and four energy cores, the M1 Pro builds on the M1’s foundations to offer either an 8‑ or 10‑core CPU (of which two are efficiency cores). And, perhaps even more impressively, the M1 Pro doubled the numbers associated with the GPU and Unified Memory. The number of GPU cores went from seven or eight to 14 or 16 cores, while the largest amount of Unified Memory went from 8 or 16 GB to 16 or 32 GB with 200GB/s bandwidth.

In addition to the quantitative CPU, GPU and Unified Memory improvements, the M1 Pro also introduced the so‑called Media Engine to do for video encoding and decoding what the Neural Engine had done for machine learning. The Media Engine is built on the M1’s image signal processing and media encode/decode engines, adding capabilities that were previously only available to Mac Pro users with an Afterburner card. It provides hardware acceleration for H.264, HEVC (H.265), ProRes, and ProRes RAW video codecs, using a video decoding engine, a video encoding engine, and a dedicated decode and encode engine for handling ProRes. 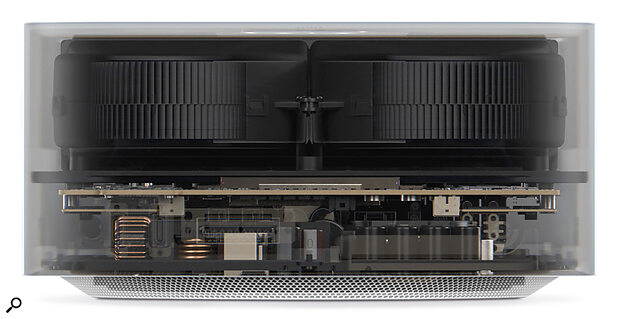 An insider’s perspective. This X‑ray view of the Mac Studio shows off the elegant internal engineering performed by Apple’s engineers.

The M1 Max represented another giant leap, embracing the M1...