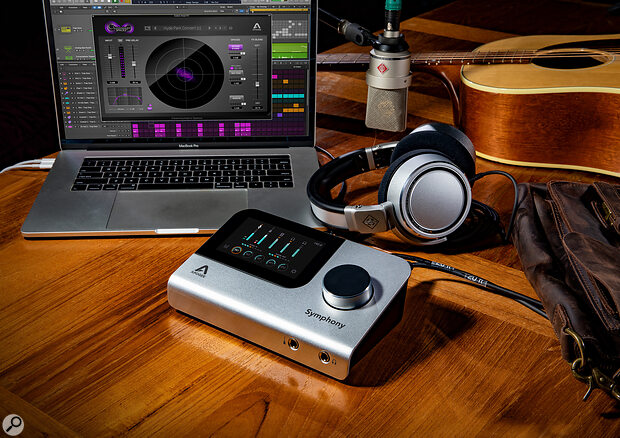 Apogee introduce their own take on the DSP‑powered audio interface.

There was a time when people expected hardware plug‑in platforms to become outmoded as host computing power increased, but it doesn’t seem to have come to pass yet. Avid’s Pro Tools HDX is still going strong, as are Universal Audio’s UAD2, Antelope Audio’s AFX and the Waves/DiGiCo SoundGrid system. Now, with the Duet 3 (reviewed SOS April 2022 issue) and Symphony Desktop, Apogee have joined the DSP party.

However, their implementation reflects a widespread change in the role of DSP in audio interfaces. The core benefits are no longer to do with making more plug‑in power available at mixdown. Rather, it’s during tracking that DSP is now seen as desirable. It makes possible technologies such as preamp and mic modelling, and it allows signals to be monitored at extremely low latency, yet still be heard with compression, EQ and other processing. The downside of this is that it complicates the user experience, typically meaning the DAW has to be used alongside a second software package with its own mixer and plug‑in windows, with much potential for confusion and liberal use of the Alt+Tab shortcut.

However, in cases where the same manufacturer makes both DAW and interface, it can be possible to integrate the two much more closely. Avid’s Hybrid Engine, for example, automatically switches between DSP and native versions of a plug‑in depending on whether it is in a live input monitoring path or not, and UA’s LUNA has similar capabilities.

Although they have close links with Apple, Apogee do not make a DAW of their own. So with the Symphony Desktop, they’ve set out to create a ‘hybrid’ interface that is DAW‑agnostic. In other words, they’ve implemented a similar automatically switched native/DSP environment in a way that should work in any recording software that can host Audio Unit, VST or AAX Native plug‑ins. The Symphony Desktop has been on sale for some time now, but hybrid operation was not fully supported until OS v1.2 was released in February 2022, hence the timing of this review!

As the name implies, the Symphony Desktop is a portable audio interface designed to sit on a working surface rather than in a rack. It connects to a Windows or Mac computer, or an iOS device, over USB. Relations with the analogue world are handled by two combi mic/line/instrument inputs, two headphone outputs and a stereo pair of line‑level monitor output jacks. Most of the socketry is on the rear panel, but one of the headphone outs is at the front, and another jack socket adjacent to it duplicates the second instrument input. Up to eight additional input and output channels are available digitally at base sample rates, courtesy of the ubiquitous optical connectors. The connection to the computer is made using a Type C connector, whilst an additional Type A socket is used for plugging in a pen drive when updates are required. I had no problems downloading and installing the v1.2 update: an Apogee‑branded pen drive is included for the purpose, but it seemed to work fine with a generic drive too.

The Symphony Desktop features stereo analogue I/O plus two independent headphone outputs and optical digital expansion.The interface itself is around the size of a thick paperback, and its wedge‑shaped physical construction inspires confidence, especially the thick metal top panel. The only moving part in evidence is a large rotary encoder; all other control is handled using a colour touchscreen. A locking ‘wall‑wart’ power supply is included and is required, there being no option for bus powering.

Like the Duet 3, the Symphony Desktop is designed to be paired with the Apogee Control 2 software, but there’s a lot more to control here, and hence the resizeable window is much busier. Two virtual mixers are available, offering independent control over the level and pan position of each input and DAW playback channel, as well as mute and solo status; other mix parameters such as stereo linking and any DSP effects are global. These mixers can be routed to any or all of the two headphone outputs, single main stereo output and four ADAT output pairs, but it’s also possible to route inputs and DAW playback paths directly to outputs.

Whereas the Duet 3’s DSP is limited to a simple but effective channel strip which can be placed only in the record path, the Symphony Desktop’s implementation is vastly more ambitious, both in its scope and its flexibility. Apogee have coded an entire suite of plug‑ins, both in all the usual native formats and as DSP processes that can run within the Symphony Desktop’s own mixer. On top of this, they’ve developed something called Apogee Channel FX. This looks to the host program like a conventional native plug‑in, but is in fact a specially designed ‘container’ plug‑in that can communicate with the Symphony Desktop. The idea is to allow the creation of a single chain of processes that is simultaneously accessible from the DAW, from Apogee Control 2 and from the front panel of the Symphony Desktop.

There are three stages at which Apogee’s processing can be applied to an input signal. First of all, the Symphony Desktop supports Apogee’s Alloy preamp modelling. Like UA’s Unison system, this doesn’t only apply tonal coloration and saturation in the digital realm: it actually changes the physical...