It's tiny, shiny and everything you'd expect from an Apogee interface. 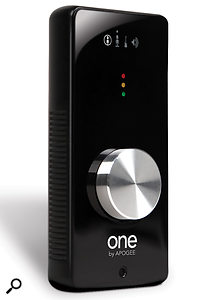 The Apogee One is a little brother to the two‑channel Duet and comprises a single‑channel audio interface in a very compact and stylish enclosure. The One is USB powered and features a mono input, stereo output and built‑in microphone, as well as a prominent multi‑function continuous encoder knob. Apogee's reputation for sound quality is near legendary, and the One offers 24‑bit audio at sample rates of up to 48kHz and a mic preamp with 48V phantom power.

The supplied driver DVD requires Mac OS 10.5.7 or higher and only about 34MB of space. Installation is very straightforward and is completed by a reboot.

One minor issue for me at this point was the length of the supplied USB cable. I know that a lot of potential One users will have laptop systems, but my Mac is located under my desk and the cable wasn't long enough for me to have the One anywhere near to where I would ideally have wanted it. Not a major problem, but still frustrating.

Once I had connected the One, I launched the bundled Maestro software and was presented with the Maestro Control and Maestro Mixer pages. Given that the unit is a mono‑input, stereo‑output device these are, understandably, very simple. The Mixer displays a meter, fader and mute/solo buttons for the single input and 'From Software' channels, with a slightly larger meter displaying the overall 'To Hardware' output level. Maestro Control, on the other hand, has gain controls for both the input and output levels, and the input is selectable between Internal Mic, External Mic, External 48V Mic and Inst(rument).

Turning to the inputs and outputs themselves, the internal microphone and instrument inputs offer 45dB of gain, while the external microphone has a gain range of 10 to 63dB, which is quite healthy. In addition, there is a switchable 48V phantom power option, although I wonder how much additional drain this would involve if your laptop was running on battery power.

An XLR and a quarter‑inch jack input are provided via a supplied breakout cable, which does much to reduce the size of the One (the unit measures just 120 x 60 x 25mm) and is an increasingly common solution for small units like this. The cable is not overly long and has a locking connector, so it shouldn't get detached in the middle of that perfect take. The output (to speakers or headphones) is via a 3.5mm stereo mini‑jack connector located at the bottom of the unit. While this does make some sense for headphones, it feels a little unwieldy and I would have preferred it to be located on the top of the unit along with all of the other connectors. There is certainly room on the casing for it, and it would just have made more ergonomic sense for a speaker output. Perhaps Apogee could even have duplicated the output sockets, with the provision that if the speaker output was connected it would bypass the headphone output?

The big silver knob on the front of the One is used to control the level of either the currently selected input or the output. Pressing the knob briefly will cycle through the various input and output options, to allow you to change gain settings. A display (very similar to the built‑in Mac OS volume display) appears on your screen when you're making changes and shows which input or output is being adjusted. If the knob is pressed and held for one second, the output it muted, which is certainly a useful feature.

Finally, there is an LED indicator for the phantom power (the red LED directly above the external mic indicator) and a three‑segment LED that shows the level for the selected input or output.

The first thing to consider is that the One, unlike the Duet, will only operate at sample rates of up to 48kHz. Whether or not this is a deal breaker really does depend on your setup and preferred way of working, but for many this may not be an issue. Also, given that the One seems to be largely targeted at mobile/laptop production rigs, the limited sample rates might not be so much of a problem, as the more limited processing power available in these kinds of system may well preclude working at higher sample rates anyway. As mentioned above, there is really very little to do in setting up the One to work as a straightforward 'soundcard'. There is, however, the option of low‑latency live monitoring, which is set up through the Maestro Control Panel. This works well for times when software monitoring latency is a problem, and is extremely easy to set up. 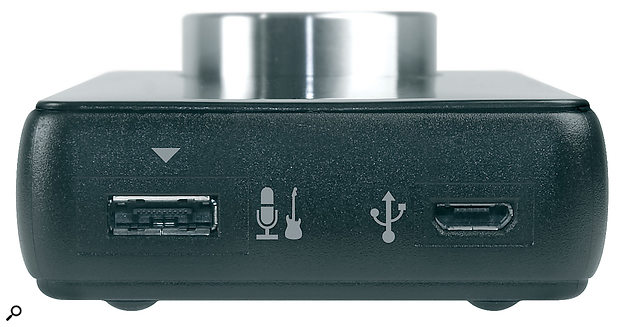 Sockets for the USB connection and breakout cable. The 3.5mm stereo output is at the other end.

I tested the audio playback against the built‑in Mac soundcard, a Native Instruments Audio Kontrol 1 and a MOTU 2408 system. As expected, the differences between the built‑in Mac device and the Apogee were quite clear and obvious from the very beginning. The tracks I listened to (which ranged from subtle classical pieces to heavily compressed dance tracks) all seemed to just 'grow' when played through the One. There was a wider stereo image and much more depth, with drier sounds being much closer and more intimate, while the wetter sounds seemed to be much further back.

Comparing the One to the Audio Kontrol 1 and the 2408 proved more difficult, as both share similar qualities to the One in terms of depth of sound field. If anything, I felt that the Audio Kontrol 1 seemed slightly more restricted, while the 2408 sounded very comparable to the One and possibly a fraction more stable. However, this could have been a result of the 2408 being clocked to a very expensive Sony digital desk, something that the One cannot do. 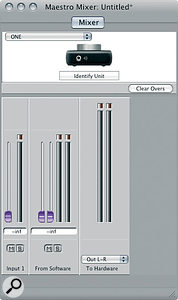 The One's Maestro Mixer page is a simple affair, as you'd expect with a one‑in, two‑out interface.I did some test recordings using all of the available input options on the One and was actually most impressed with the internal microphone. The line and mic inputs gave very clean results, which is what I'd expected, given the pedigree of the Apogee brand. The gain seemed more than adequate for the selection of microphones that I used (ranging from an SM58 to a Studio Electronics Gemini) and the results, while perhaps not as characterful as a vintage (or very expensive) dedicated mic preamp, showed a good depth and frequency response with very low noise. Vocals sounded breathy where they were supposed to, without being harsh, and a couple of badly played acoustic guitar parts that I managed sounded very snappy.

As I mentioned above, I was very impressed with the built‑in mic. I'm used to the built‑in microphones in laptops, which are dubious at best, so I guess I set my expectations pretty low for the One's internal mic. I was assuming that it would be good enough for recording voice‑overs (for podcasts and the like) and for perhaps capturing a quick acoustic guitar recording when inspiration strikes, but it is actually far more capable than that. I tried recording a vocal with both the One and the SE Gemini mic and I was pleasantly surprised. While the Gemini delivered a recording that was warmer and fuller, the difference between the two was not like day compared to night, and I honestly believe that this built‑in mic would stand up to some of the more affordable condenser mics available these days. Apogee also make an optional mic‑stand adaptor for the One, which costs less than £20 in the UK.

Is This The One?

I can't stress enough how surprised I was by the One. My thoughts on opening the box were that it couldn't possibly live up to Apogee's huge reputation at this price point. But I was very, very wrong. For a mobile rig, this unit is a godsend, as it can provide not only a great playback interface but also a very good preamp/line‑input section, as well as that built‑in mic for capturing quick ideas. I'm not suggesting that the One will replace your combination of favourite vintage preamp and condenser mic, but it will certainly give many people a shock when they hear what is possible from such a small unit!

My only real gripe is that the One (like the Duet and Ensemble) does not work with Windows PCs. I understand that this is an Apogee decision, but I can't help feeling that they're losing out on a lot of sales, especially since the same applies to the two‑channel Duet.

Apogee are clearly aiming the One squarely at the laptop‑musician market, and even though I seldom use my own laptop rig I fully intend to get hold of one of these myself! Now, where did I put my chequebook?

While there are plenty of two‑in, two‑out USB soundcards on the market and some great products at around this price point, I can't think of a single one that offers the One's combination of stunning audio quality, compact size and built‑in microphone.

As far as I am aware, the One provides a unique combination of features, sound quality and portability at a price point previously unheard of for something of this nature. If you have limited input and output requirements I cannot recommend the One highly enough.