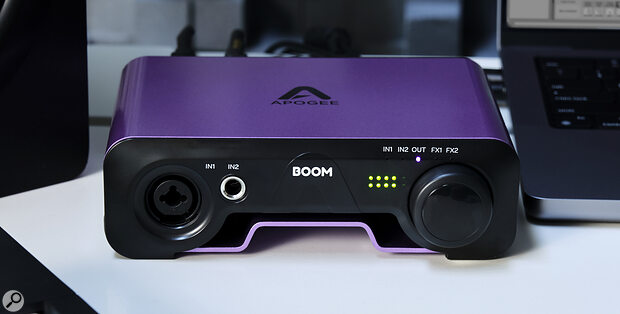 Apogee hope to make an impact with their new entry‑level interface.

The name Apogee is usually attached to premium products. Their flagship Symphony I/O MkII is the interface of choice for many big‑name engineers, while more portable devices like their Symphony Desktop and Duet 3 prioritise audio quality and innovation ahead of low cost. However, they’ve long maintained a presence at the more affordable end of the market courtesy of the Apogee One. Introduced way back in 2010, this ultra‑portable stereo interface provided a modestly priced point of entry into Apogee’s universe.

After a long and successful career, the One was probably ready to ride off into the sunset soon in any case, but component shortages have hastened its end. Into its small but perfectly formed shoes steps the BOOM: another portable, bus‑powered USB interface, but one designed on somewhat different lines.

The One’s form factor recalled that of the original iPod (remember those?). This made it extremely portable, as long as all you wanted to do was mix on headphones or record the sound from its built‑in mic. However, it you wanted to use its mic preamp or connect it to loudspeakers, you had to connect the rather cumbersome breakout cable, which slightly undermined both its go‑anywhere potential and its clean looks.

Apogee have maintained this approach with the new Duet 3, which I reviewed earlier this year (www.soundonsound.com/reviews/apogee-duet-3); here again, the cost of ultra‑portability is the need to use either a breakout cable or the optional Duet Dock in order to access all of its I/O. With the BOOM, however, they’ve reverted to a much more conventional design (which, to my eyes, bears a passing resemblance to the third generation of Avid’s M Box interfaces from days of yore). The BOOM won’t fit in your pocket, but is completely self‑contained, with a full complement of socketry built in.

As the presence of a Kensington lock point attests, the BOOM has been designed with markets such as education in mind. Ruggedness is important in this context, and the electronics are housed within a stout folded‑metal shell, with nothing protruding apart from a single large rotary encoder. The top part of this shell flexes noticeably under pressure, but is plenty thick enough to do its job.

When it comes to high‑quality affordable interfaces, Apogee are back in the game.

Unlike the One, the BOOM has no built‑in microphone. One of its two front‑panel mono inputs can accept a mic, line‑level or instrument signal through a combi socket; the second is a quarter‑inch jack that can accommodate line‑level or instrument signals. The rear panel, meanwhile, boasts quarter‑inch sockets for the speaker outputs and the single headphone output. This is located in an unfortunate position right next to the USB Type C socket, and when plugging and unplugging headphones I often jogged the USB cable, disrupting the computer connection and forcing me to reboot Pro Tools.

To my mind, the headphone socket would have been much better placed on the front panel, the right‑hand side of which is occupied instead by the rotary controller. Pressing the encoder steps through three different functions; a row of purple LEDs above it tells you which one is currently active, and a double row of green LEDs to its left serves both as a meter and, while you’re turning the encoder, to indicate level settings. 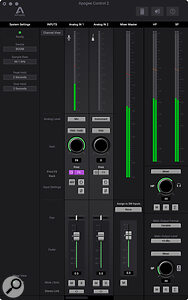 The Apogee Control 2 software.The two rightmost purple LEDs are labelled FX1 and FX2, and these give a clue as to the BOOM’s hidden powers. Like a growing number of portable, bus‑powered desktop audio interfaces, the BOOM has an internal DSP capability, allowing it to process signals with minimal latency on their way to disk and to the listener’s ears. In fact, in this and many other respects, it’s functionally identical to the Duet 3, so I’ll refer readers to that review for a detailed explanation of what’s on offer. Like the Duet 3, the BOOM is capable of running two instances of Apogee’s Symphony ECS Channel Strip plug‑in. These are activated and manipulated from the Apogee Control 2 software, where they are hosted in so‑called Print FX slots, meaning that if active, they are always applied to the signal being recorded.

The similarities between the BOOM and the Duet 3 are very apparent if you compare the way Apogee Control 2 looks in both cases. Here, too, preamp gain is adjusted digitally in 1dB steps, which to my mind is highly preferable to the imprecise potentiometers you get on most affordable interfaces. The main difference is that you only get the one mic preamp in this case, though in practice, I think you could get away with recording a mic through the second input as long as it didn’t require phantom power. The second input has a 45dB gain range plus a switchable pad, whilst the mic preamp offers a total of 72dB if you factor in its 10dB pad. Again, this is significantly better than what you get in most affordable interfaces.

As its different — and, in fact, wider — gain range would suggest, the BOOM preamp design is slightly different from that used in the Duet 3. It is, nevertheless, very highly specified, with a particularly impressive EIN figure of ‑128dB unweighted, equivalent to an A‑weighted measurement of ‑131dB. Dynamic range is quoted as 122dB on the input side and 117dB on the output side, an all‑round improvement over the One and far more than adequate for any conceivable recording scenario involving the BOOM. Like most bus‑powered interfaces, it can’t quite generate a full ‘professional’ output level, but +15dBu is probably better for feeding many active loudspeakers in any case. If there is a difference in audio quality between the BOOM and the Duet 3, I’d be very surprised if it was audible in everyday use. 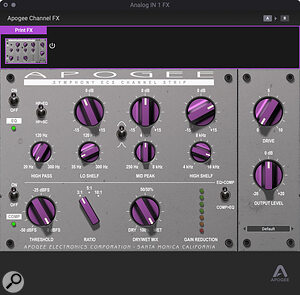 The BOOM comes with the DSP version of the Symphony ECS Channel Strip.Being so similar to the Duet 3, the BOOM also shares most of its minor negatives. There’s still no visual indication within Apogee Control 2 as to which parameter is under encoder control. Important monitoring features such as mono and dim can only be accessed in software, and although pressing and holding the encoder mutes the outputs, the mute button within the Apogee Control mixer doesn’t follow. Hover Help within Apogee Control is still missing in action, and although the DSP version of the Symphony ECS Channel Strip is supplied free, the native version remains a cost option. On the plus side, Apogee have now finished their iOS control app for these devices. And, unlike the Duet and many other Apogee interfaces, the BOOM can accept line‑level inputs on its quarter‑inch jacks, rather than forcing you to buy jack‑to‑XLR cables.

In sonic terms, the stand‑out feature of the BOOM for me was its headphone amp. This outperforms those found in most other bus‑powered interface, and to my ears, actually sounds better than the headphone amps in many mains‑powered devices. I’d go so far as to say that even if you never recorded a note through the BOOM, it would be a valid choice as a high‑end DAC for music listening. And as an interface for recording and mixing, it’s hard to fault, as long as you only ever need to track a single microphone (and you don’t often want to swap your headphones around!). In fact, the BOOM offers 90 percent of the functionality of the Duet 3 for much less than 90 percent of the cost, and although it won’t push the Duet out of the queue for a place in the Design Museum, its form factor is arguably more practical. When it comes to high‑quality affordable interfaces, Apogee are back in the game.

The BOOM provides nearly all of the functionality of Apogee’s Duet 3 in a much more affordable, if more conventional, desktop device.