LA Scoring Strings hopes to set itself apart from the competition with clever devices that make it both more realistic and more user‑friendly. 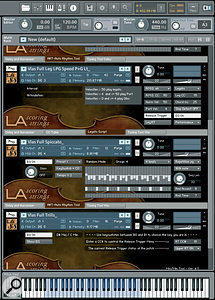 LASS is a deep sample library. Fortunately, a fair amount of information is visible from each instrument's window and is specific to that particular articulation.

"You wrote that?” my wife asked, after hearing the results of my toying around with LASS for about half an hour. "That sounds really good. Did you really write that?” she added. In a way, that sort of sums up my experience with LASS, but since Sound On Sound doesn't print two‑sentence reviews, I'm going to have to elaborate.

LASS is the brainchild of Andrew Keresztes, an accomplished film composer who was frustrated with the current crop of string libraries and decided to do something about it. While most of us would sit back and wait for technology to catch up with our ever‑increasing demands, Mr Keresztes hired a string orchestra, booked time at an LA film scoring stage, and created a string library that overcomes many of the limitations of other libraries, while implementing several innovative ideas of its own.

LA Scoring Strings, or LASS (thank heaven for acronyms), is installed from six dual‑layer DVDs, takes up about 40 gigabytes of hard drive space, and uses the ubiquitous Native Instruments Kontakt player. Now 40GB of samples is a good chunk of hard-drive real‑estate, but when you take into account that it includes both 16‑ and 24‑bit versions of the library, it's actually a pretty efficient usage of samples.

The manual for LASS is in PDF format, is well written and explains LASS's unique features quite capably. I would have liked a hard copy to peruse away from the computer, or at least a chart with the MIDI controller info and possibly quick how‑to guides. I ended up copying and pasting excerpts from the manual to create my own version of a one‑sheet reference to print out. While this is a minor issue, in view of LASS's price tag I think something more substantial than a PDF is in order.

LASS employs several features that differentiate it from other high‑end string libraries. The first and most noteworthy of these is its true divisi implementation.

Composers working with string libraries have had to compromise their arrangements to some degree due to the fact that divisi sections have, up until now, not been available. But why does it matter? Well, suppose your first violins are divided into two groups, each group playing a different note. If you play two notes on duplicate violin patches, the whole section will play each note, effectively doubling the section size. That is not the composer's intention, but the workarounds are not usually worth the effort. Mixing libraries can yield decent results but may require serious tweaking. Using smaller sections (provided in some libraries) seems like a solution, but not when it is the same two sections. While your notes‑to‑players ratio is intact, it's not the same as two separate groups of players.

LASS overcomes this dilemma by providing separate sub‑sections within each instrument section. For instance, the first violins patches are divided up as follows: 16‑player full section, eight‑player section, two different four‑player sections, and a first-chair section leader. The divided sections are recorded separately in their own physical position, with different players. This array of sub-sections makes it possible to divide your section in a very realistic fashion. 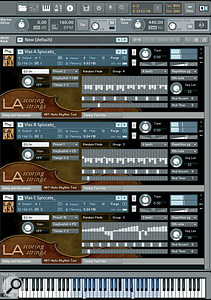 Whether you're dividing the sections into sub‑sections, as pictured, or using the full instrument patches, instantiating multiple Auto Rhythm Tools add a tremendous amount of movement and colour to your string arrangements.

LASS's use of legato is truly outstanding. Typically, legato passages (notes tied together with no space between them) contain varying amounts of subtle portamento and glissandi between the notes. LASS handles this wonderfully, and achieving realistic legato playing in LASS is essentially effortless. If a note is held down while the next note is played, LASS adds either portamento or glissando, depending on the velocity of the second note. Very cool! If the time it takes you to reach your second note is not to your liking, no problem: just use MIDI CC (Continuous Controller) 83 to control speed.

When I first read the manual and saw that there was no keyswitching but instead lots of MIDI CC numbers to tweak, I was worried that I wouldn't have enough knobs on my controller to get the most out of LASS. My fear was allayed when I noticed that it was the same series of controllers being used for the different articulations. The six knobs on my keyboard controller were quite enough.

So many great film scores get their eeriness from strings playing harmonics, but most libraries overlook harmonics, or include a throwaway patch or two. Each LASS section (and sub-section) contains very usable harmonic patches. The same can be said for its sordino (muted strings) patches, which offer yet another palette of sound.

ART (Auto Rhythm Tool) is another of LASS's secret weapons. When short articulations like spiccato, staccato and pizzicato are loaded, pressing on the sustain pedal initiates ART. While sync'ing to your DAW's tempo, ART plays your notes in rhythm with varying accents. You can choose between eighth‑note, eighth‑note triplets and sixteenth‑note rhythms. There's also a 'Double‑time' option. I believe many users will have the same reaction that I did when playing LASS with ART engaged: 'Wow!' Tight action-movie backgrounds are so easy to create that you almost feel like you're cheating.

There are 10 groups of rhythmic patterns to choose from (actually, the rhythm is the same but the accents are different) but as making your own is pretty effortless, creating them on the fly is a good way to go. Of course, if you create a pattern you'll want to use again or apply to another instrument, you can save it via the drop-down menu.

I believe there are potential LASS owners out there who don't view first-chair players and true divisi as big game-changers. For them, the Auto Rhythm Tool may be reason enough to purchase LASS.

The ART would not yield realistic results unless LASS used a round-robin pool of samples. LASS, however, goes one step further, providing random round-robin sample playback. Instead of triggering samples in the same sequence, LASS has the ability to randomise sample playback, ensuring an even more realistic performance.

This is probably a good time for me to address the big question and let you know how LASS sounds: exceptional. I was glad to hear that the library has a dry overall sound without much ambience, allowing for more definition in phrasing. The strings themselves sound pristine and smooth, while the shorter articulations possess a slight grit to their attack. I own a few string libraries, but I don't think I'll be using any of them in the foreseeable future. LASS covers everything very well, even as a solo instrument. The other major libraries have some big things in the works, but they would have to really hit it out of the park to touch LASS, which is outstanding and ready now.

I had to adjust how I set up my composing template while using LASS: since it doesn't use keyswitching (you can set up keyswitching easily enough in Kontakt), I needed to load more tracks than I normally would. I used LASS to, quite quickly, write thriller‑sounding movie music. I also used it to write soaring romantic cues with tremendous results.

One of the side effects of LASS's true divisi is that you start to think more like an orchestral composer. I haven't always given much thought to how I would divide a chord in a section, and now it's something I ponder way too much.

The great thing about LASS is that in spite of it doing so many complicated things — and doing them so well and with incredible control — it is very easy to use. If you've read any of my past reviews, you'll know that I can get a little overwhelmed with a lot of options. But with all of LASS's control features, the learning curve is more like a speed bump.

I'm not a gusher when it comes to sound libraries. There's typically a ratio of how good it sounds to how easy it is to use that determines my rating. But I have to gush about LASS. It sounds fantastic, it's easy to use and best of all, it inspires to me to compose.

LASS's biggest competition may come from East West/Quantum Leap Hollywood Strings, which wasn't available at the time of writing but may be by the time you read this. Hollywood Strings will be aiming to take over as the go‑to string library for film composers, but at the moment LASS is still king. However, EWQL Gold and Platinum, which are full orchestral packages, include extensive string-section capabilities.

When I first heard about LASS and that its big claim was true divisi at last, I had to chuckle and roll my eyes a bit. Most of the composers I know don't care if the string sections are dividing accurately or not. Many of them load up a string patch and play chords. For them, bigger is better, so having more notes on a divisi is excellent. But then I thought about it for a minute. Yes, your divisis are bigger, but now your unisons are smaller in relation to them. That's not ideal.

The other case for true divisi: film composers need to play accurate mock‑ups for directors before they record an orchestra, so that there are no surprises on the scoring stage. That's a fair point. However, the trend nowadays is to record orchestras in sections and, in many cases, overdub the strings once or twice or three times. So your true divisi is irrelevant, right? Not so fast. It all comes down to ratios and if the composer wants half the cellos playing Bb and a quarter of the cellos playing D and the last quarter playing G, then that's how the notes need to be distributed, no matter how many times the section is doubled.

But the great thing about true divisi is this: before LASS, if I wanted my violas, for instance, to all be playing an F, I would call up the viola section and play F. I might add some nuance with expression, and that would be it. Now, however, thanks to LASS, I load up the two three‑player sections and the six‑player section and do the same thing as before — only this time to each sub-section — and the part really comes alive. Add the first chair and you're all set.

Verdict: true divisi is not a trivial matter.

Whether you're attracted to the true legato, the real divisi, The Auto Rhythm Tool or the first-chair players feature, LA Scoring Strings is currently the king of the hill when it comes to string-section libraries.