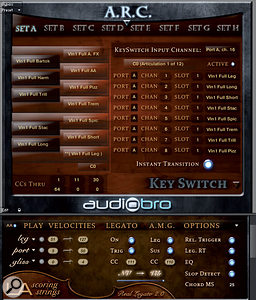 LASS 2.0's new Audiobro Remote Control (ARC) pages include global control of all loaded patches: any adjustment of a control on an ARC page causes the same change to occur in every patch. User‑definable keyswitch sets may be globally repositioned by adjusting the note displayed in the small window underneath the vertical 'keyswitch keyboard' graphic, to the left of the screen.

Since its release in July 2009, Audiobro's LA Scoring Strings has become a byword for accurate, high-quality orchestral strings emulation. One of the library's strengths is its flexible section sizes: ensembles are presented in a choice of full, half, quarter (two versions) and solo instrument formats, making it easy to create anything from a string quartet to a large‑scale, 46‑player arrangement. The option of smaller sections also enables authentic divisi part allocation, as used in real‑life orchestrations. True legatos, glissandi and Bollywood‑style portamentos are also key selling points. For more details, read the original Sound On Sound review, at /sos/apr10/articles/lascoringstrings.htm.

Upon LASS's completion three years ago, its creator Andrew Kerestzes announced that new patches created for his own scoring projects would be posted on Audiobro's forum, thereby making this an evolving, 'living library'. The evolution gathered momentum, and, partly in response to user requests, the piecemeal patch‑tweaking approach eventually intensified into a major 2.0 upgrade. In this review, we'll look at the new features introduced in LASS 2.0 and delve deeper into some of the library's workings.

An immediately obvious benefit of the upgrade is that the patch list has been simplified: in place of multiple sustain, legato, portamento and glissando options, you'll now find simplified, all‑in‑one 'Legato Sustain' patches incorporating all four articulations, which can be played individually or jointly in one instance of Kontakt. Although the legatos are essentially monophonic (as is the norm in orchestral libraries), an intelligent built‑in script tracks your playing and automatically switches to polyphonic mode when you play a chord. If you'd rather stick to straight sustains, you can turn off the legato mode remotely with a CC command. 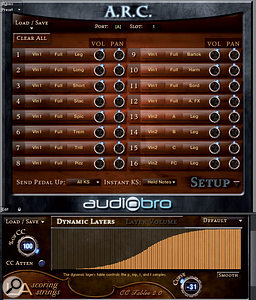 The Set‑up page is where you tell the ARC which programs you've loaded. Once you've selected the names, the information is automatically passed on to all the other control pages.The new legato/sustain instruments now include both non‑vibrato and vibrato samples, which can be crossfaded via the CC2 controller; this is a nice expressive feature. Non‑vibrato samples can be quickly unloaded from a patch, or turned on and off on the fly to conserve polyphony. The NV‑Vib option doesn't extend to the basses or solo instruments, but since the soloists greatly vary the amount of vibrato between their quiet and loud dynamics, you probably won't miss this facility.

Moving into the realm of the unpredictable, enjoyable new 'aleatoric' patches make it easy to create dissonant effects for 'tense score moments', such as those endured by myself and fellow Chelsea fans in the recent Champions League penalty shoot‑out. The patches' three divisi sections can be individually detuned and pitch‑modulated, allowing the creation of anything from a mildly disturbing pitch creep to a mind‑blowing, apocalyptic freak‑out. My experiments quickly yielded soundscapes reminiscent of a swarm of angry locusts, a helicopter fleet fly‑by and a ring modulator operated by the bloke out of the Texas Chainsaw Massacre. Conclusion: these aleatoric patches are a fun, quick and easy way of generating scary sound-design textures.

Tremolos (played by all instruments) and trills (played by violins and violas only) now benefit from integrated legato, portamento and glissando articulations, making it easy to create colourful effects such as sliding up to a high trilled note. Although not a new feature, a very cool 'Trills Script' automatically creates trills that fit the scale of your music: select (say) D-major, by hitting the corresponding keyswitch, and a D note will trill on an E, an F# on a G, and so on. These in‑key trills are particularly effective in chords, but if you prefer the old‑school approach, global semitone or tone trills can also be selected via a couple of keyswitches. 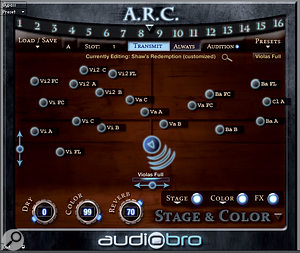 The new Stage & Colour page allows you to position your instruments in a virtual surround setup, as well as choosing overall tonal colour and reverb settings for all your patches.

The Audiobro Remote Control (aka ARC) is the most striking new feature introduced in LASS 2.0. This powerful script allows you to control multiple patches from one place; for example, you can globally purge or load samples, turn vibrato/non‑vibrato on and off, set up Auto Rhythm patterns, and so on, without having to scroll down and individually perform those operations on each patch. As well as being a big time‑saver for programming multi‑patch setups, the ARC also introduces several important new features, which we'll examine below.

Since many orchestral samplists rely on keyswitches to perform articulation changes, the absence of patch keyswitching in the original library was a surprise. That omission has been rectified in LASS 2.0: users can now set up their own keyswitches, which is good news for those who want to integrate this library into their existing orchestral templates. Using ARC's 'Set‑up' page (the details of which are explained in the 'It's A Set‑up' box), you can create a set of up to 12 keyswitches, which can be globally shifted up or down in pitch simply by adjusting the bottom note.

The beauty of this system is that you can play the patches individually on their respective MIDI channels, or keyswitch between them on a single, user‑defined channel. Any mod wheel or CC data you use will automatically be passed on to all the keyswitch patches by the ARC. The system allows you to layer multiple patches on one keyswitch, and also supports Kontakt instrument banks of 128 patches, which should be enough for even the most demanding power-user!

Another prominent ARC feature is the 'Stage & Colour' page, where you can adjust the overall tone colour, stage position, reverb and delay effects of all your loaded patches in one fell swoop. 'Sonic profile' presets inspired by famous film scores provide a handy starting point. Two that caught my ear were 'Fellowship Ring' (what film can they possibly be alluding to?), featuring a lush, concert‑hall‑style reverb based on new impulse responses created by Audiobro, and 'Sul Ponticello', a highly effective simulation of the 'on‑the‑bridge' bowing, which gives a fabulous, tinselly shimmer to violin tremolo patches.

The 'Colour' control tends to take the sharp edge off the timbre and impart an overall mellow, unifying, 'recorded' quality. This can be blended with the dry signal, so you can have as much or as little of it as you want. Stage positioning includes conventional left‑right panning, individual instrument stereo-width control and a clever, front‑to‑back 'proximity' setting which damps high frequencies as you move an instrument towards the virtual 'back' of the stage, thus simulating the naturalistic attenuation effect of distance on sound. There are individual controls for stage position, colour and reverb, and an 'FX' knob for slap‑back delay. 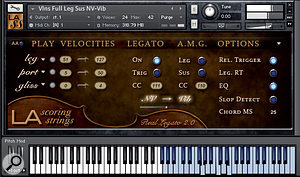 Legatos, glissandos and portamentos are now incorporated in easy‑to‑use single patches. Setting the portamento velocity range to 0‑127 bumps the other two articulations out of the race, enabling you to play Bollywood‑style pitch slides over the full dynamic range.

Introduced in version 1.5, LASS's Auto Arranger software is now combined with 'Delay and Humanization' programmable timing variations on the clunkily named but exceedingly potent 'AA & DNH' page. The Auto Arranger aims to take the sweat out of arranging by automating part‑allocation and voice‑leading: for example, you can allocate four‑note chords to (from the top down) first violins, second violins, violas and cellos. You can also make the basses track the cellos an octave down, or first violins double the seconds at the octave, without having to edit your MIDI notes.

While this is a convenient way of generating a realistic string arrangement from a keyboard part, it gets a bit stickier when you vary the number of notes in a chord within a passage; programmable range limits and an 'advanced edit' page containing various user‑definable sub‑rules help you determine which instrument will play what note, so, with a bit of head‑scratching, you can pre‑determine instrument allocations for anything from a single note to a 12‑note chord! The big attraction is that you can set up auto‑arrangements on one page, and save them as keyswitchable presets.

Other new features in LASS 2.0 include a micro‑tuning page (a boon for users who work with non‑European scales and tuning systems), an enhanced MIDI CC (Control Change) table enabling fine control and shaping of mod‑wheel (CC1) dynamics, and a visually‑enhanced EQ page featuring three‑way parametric equalisation with adjustable 'Q'. An honourable mention should also go to the excellent Auto Rhythm Tool, a splendid generator of urgent spiccato rhythms that was rightly singled out as a major selling point in the original SOS review.

Somewhat counter‑intuitively, it turns out that the so‑called full version of the library (LASS Full 2.0) is not actually full: an additional volume called LASS Legato Sordino 2.0 adds muted legato articulations played by full, half‑sized and quarter A/B ensembles. These sound very nice indeed, but the extra expenditure may be a bridge too far for the uncommitted.

LA Scoring Strings has long been hailed by cognoscenti as one of the elite string libraries, and the new functions, sound‑shaping options and simplified patch system introduced in its 2.0 upgrade can only enhance that reputation. It could be argued that the Audiobro Remote Control pages will go over the head of newbie sample‑users, but since the library works perfectly well without the ARC, anyone used to working with Kontakt libraries can use the patches in the normal way and get to grips with the control pages at a later stage. Either way, Audiobro's 'onwards and upwards' approach shows commitment and ingenuity, and the LASS 2.0 upgrade has undoubtedly made an already powerful library stronger, more capable and more musically flexible.

A set of virtual 'Second violins' patches has been created from the violin samples. These are programmed to avoid phasing issues with the first violins and panned to a Second violins' orchestral stage perspective.

Designed for divisi use, the 'a' and 'b' sections were individually recorded and feature different players. All sections have first‑chair and virtual second‑chair solo instruments performed by the section leaders.

LASS 2.0 is available as a download only and runs on the free Native Instruments Kontakt 5 Player (not supplied with the library), and on the full version of Kontakt 5. The samples (now all 24‑bit) are presented in NI's NCW lossless compression file format, which means that they require only about 16.4GB of disk space.

LASS 2.0's ARC script has one minor wrinkle: before using it, you have to open its 'Set‑up' page and select patch names that correspond with your loaded patches. Drop‑down menus containing the instrument names, section sizes and articulations make this very easy, but you might wonder (as I did) why it's necessary. The maker's answer is: "Kontakt does not allow bi‑directional communication from the patches to the ARC script, but the script can communicate with the patches.” In other words, you have to tell the ARC what the active patches are, then you're ready to rock.

A top orchestral strings library famed for its flexible section sizes has acquired a host of useful new features that enhance its musical and technical capabilities. Although the 2.0 upgrade contains no new samples, existing users and newcomers alike will enjoy the expanded sound options and increased ease of use, while more experienced samplists can look forward to exploring the innovative Audiobro Remote Control pages.