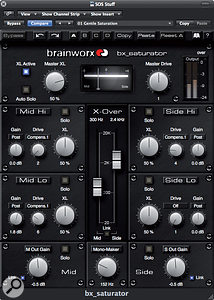 Deconstructing a stereo mix into Middle and Sides components for separate processing is a common technique used both in mastering and overall mix or bus processing, as it opens up the possibility of applying different treatments to centre‑panned sounds and those panned to the left or right extremes of the soundstage. The Brainworx BXsaturator plug‑in, available for Mac OS and Windows, uses the same technique as a starting point for a distortion process that is also split across frequency bands: a crossover sets a split point, allowing differing degrees of distortion to be applied to the frequencies above and below the crossover point, while M/S processing allows different settings of crossover frequency and distortion amount to be applied to centre and side‑panned sounds. The designers claim that the range of distortion effects goes from subtle warming or thickening to obvious crunch. An additional feature is Mono Maker, which collapses lower‑frequency signals to mono without compromising the stereo image of the mix's high end; the frequency below which this happens is fully user adjustable. Any form of M/S processing has to be handled carefully, to avoid phase errors creeping in when the signals are recombined to stereo, and Brainworx have developed their own 'True Split' crossover to maintain phase integrity.

Devices such as the Aphex Aural Exciter have already established the principle that adding subtle amounts of distortion to specific frequency bands can actually give the impression of increased clarity rather than obvious distortion, while we all know about adding warmth to bass sounds by dirtying them up a little. Being able to apply these principles separately to the Middle and Sides components of a signal really increases the flexibility of the processing, as most of the low‑frequency energy in a typical mix is concentrated in the centre, making this area easy to treat separately.

Initially, I was concerned that having only two frequency bands would prove restrictive, as my previous adventures with multi‑band saturation usually centred around the Drawmer Masterflow; this splits the audio into three bands, and I often find myself processing the highs and lows but leaving the mid-range band almost completely clean. You can't do that with BXsaturator's two‑way crossovers, but you can, for example, set one crossover point to process mainly the lows in the centre (Mid) channel, while setting a higher crossover frequency for the sides and then processing mainly those frequencies falling above that point, to create a similar 'clean mid-range' effect.

A toolbar provides the usual Bypass, Undo and Redo options ,along with A/B/C/D Snapshot settings, plus Copy and Paste functions. The four snapshots can be automated to switch settings for different sections of a song: for example, to change the effect for a chorus or bridge. The XL Active button disengages all four drive sections but not the Mono Maker or output level settings. An Auto Solo function is also included, allowing each of the four sections to be soloed automatically when you click and hold any controls within that section. Master XL and Master Drive controls affect all four sections, but retain the ratios set using the dedicated section controls, so these are useful for making the overall effect a little more or less intense.

The key control in each of the four sections is XL, which sets the amount of distortion added, much in the fashion of a mix control. Drive sets by how much the signal is distorted, so by juggling these two controls you can, for example, add a lot of mildly distorted signal or perhaps a lesser amount of heavily distorted signal. Vertical faders set the Middle and Sides crossover points, either independently or in linked mode. Drive includes two optional gain‑compensation modes that help even out level changes as you apply more drive, and when these are switched off, the level increases dramatically as you crank up the Drive. The first compensated mode is appropriate for most work, while the second might work well with material that is already heavily compressed. Separate gain adjustment may also be applied either before or after the distortion processing.

Of course, applying different amounts of processing to the Middle and Sides signals can also change their relative levels to some extent, even with one of the automatic gain‑compensation modes active, so metering and master M/S level controls allow you to compensate manually. The metering will, likewise, show if you have pushed the signal into clipping, so you can pull down the gain. The overall output level of the plug‑in can be adjusted using the Link buttons associated with the master Middle and Sides level controls, and it is also possible to change the stereo width by adjusting the M/S mix balance. Here, the Mono Maker section is particularly useful in allowing the highs to be widened more than may be natural without causing phase problems at the low end. I set the crossover point to around 120‑150Hz with good results. 'Mono-ising' the lows is also a common ploy when preparing material for vinyl mastering to avoid stylus tracking problems.

Now to the important part: how does it sound? The answer is that its sound can vary significantly, depending on how you set it up, and although my preference is for the more subtle settings, you can turn on the grit big time if you need to — as demonstrated in a number of the factory presets. In more subtle mix‑enhancement applications, I found that using some drive on the Middle signals below around 150Hz and to the Sides signals above 5kHz created a very subtle firming up of the mix, as well as adding a little clarity, but, surprisingly, also made it sound noticeably louder without adding any significant peak level. It's also fun to experiment with mono-ising the lows and then widening the stereo image slightly by pulling up the level on the side signal.

As a processor for solo instruments, BXsaturator can add enhancer‑like brightness to acoustic guitars, depth and definition to kick drums, or dial up the grit to turn a weak snare sound into something altogether more assertive. While high levels of drive at the upper end of the spectrum can sound fizzy if applied in excess, adding dirt to the lows is a great way to pump up a bass synth, or simply to add some musical cornflour to a limp pad. The user interface makes operation very easy and intuitive, and there are applications in just about any genre of music, whether mixing or home mastering. In all, then, this is a useful plug‑in but, like the Force, it must be used wisely!

A versatile plug‑in that can be used for subtle enhancement or to add very noticeable levels of distortion, all in a very controlled way, BXsaturator is a useful tool both for mixing individual sounds and for overall mix processing.