When mixes are setting your teeth on edge, Brainworx’s mastering tool offers a soothing effect.

The meaning of some descriptive terms in audio is notoriously difficult to pin down. People often have completely different ideas of what is meant by ‘warm’ or ‘smooth’, for example. However, I suspect that there would be fairly universal agreement as to what ‘harshness’ is. It’s a problem that can afflict individual tracks and full mixes alike, and manifests itself as an uncomfortable, gritty or aggressive edge to the sound.

I find that harshness is particularly prevalent where recordings are made in less-than-ideal environments, where engineers often try to eliminate bad room sound by miking too close, and in live recordings, where close-miking and DI’ing are the norm to minimise spill. And since I get a lot of both kinds of recording to salvage, I was intrigued to try Brainworx’s BX_refinement, which, as far as I know, is the first plug-in processor dedicated specifically to reducing harshness. BX_refinement is the brainchild of Stonebridge Mastering’s Gebre Waddell, and although it does not emulate any specific hardware processor, it aims to recreate the kind of ‘de-harshing’ effect which he achieves by using multiple tube-based analogue units. It is available in all the usual native plug-in formats, as well as for Universal Audio’s UAD2 Powered Plug-ins platform.

The main weapon that BX_refinement makes available is a large rotary control labelled Damping. This implements what Brainworx call a “dynamic peak band EQ” which is hard-wired to target the upper mid-range. The Soft and Hard options control the shape of the EQ filters that are applied, and there’s a Solo Filter button which, like the Listen button in a noise-reduction processor, lets you audition only what BX_refinement is removing from the signal. 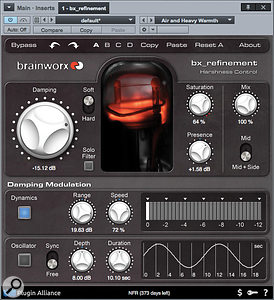 If you want to take advantage of the dynamic aspect of the damping algorithm, you’ll need to pay a visit to the Damping Modulation section. This lets you vary the response of the EQ in two ways: first, by varying its level with that of the input signal, and second, by applying a low-frequency oscillator, which can be sync’ed to host tempo. (I’ll admit that the point of this rather escaped me.)

Finally, if you want to complement the removal of harshness with the addition of some warmth (whatever that is!) you can apply Saturation to the output signal; and, as the de-harshing can leave things sounding a little dull, you can also add Presence to restore some sparkle. BX_refinement always matrixes a stereo input into M/S, but you can choose whether both channels should be processed, or just the Mid.

For testing purposes, sadly, I had no difficulty drumming up a good collection of tracks that were in need of de-harshing. The first thing I tried was a drum recording where the overheads suffered from an unpleasant, gritty emphasis in the 2kHz region. BX_refinement did a good job of removing this, but the dynamic element did not prove useful, and after some experimentation, I was actually able to get slightly better results with a conventional equaliser, as I was able to target the problem frequencies more precisely.

Next up was a miked recording of an acoustic guitar which had, I felt, been strummed too forcefully. Here, the ability of BX_refinement to respond to the dynamics of the input signal certainly made a difference; but in this case, the frequencies that I was perceiving as harsh seemed to be rather higher, and as there’s no way to adjust the range of frequencies which are targeted by BX_refinement’s algorithm, it didn’t quite hit the mark.

I had similarly mixed results with other individual tracks and, perhaps unsurprisingly given its origins, found that in general BX_refinement was most useful on the master bus. Where an entire mix is sounding a little bit edgy, it can really help to soften things up without reducing clarity, or making everything sound muddy. Where there’s a need to apply master EQ on my mixes, nine times out of 10 it involves a cut somewhere in the 2-3kHz region, and BX_refinement meets the same need in a way that’s often more natural and less damaging to the good qualities of the mix.

The processing within BX_refinement is put together from familiar ingredients, and ultimately, I don’t think there’s anything going on under the hood that you couldn’t mimic with a good dynamic equaliser and a saturation plug-in. What’s not available elsewhere, however, is the way in which Gebre Waddell has put in thousands of hours of listening and tuned this toolkit to target the specific issue of harshness in a mix. BX_refinement is a quick and effective way to address a perennial mix problem, and although I think that the ability to vary the frequency range targeted by its dynamic EQ would make it more versatile, it does exactly what it’s supposed to.

BX_refinement is an intriguing and original idea with many real-world applications.