Avantone are best-known for their modern take on the classic Auratone speaker, but they make mics too. Find out how their latest model performs. 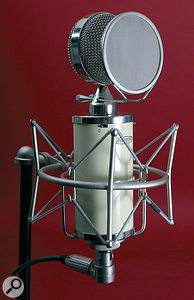 When Avantone's BV1 multi‑pattern tube mic turned up for review, I thought somebody had sent me a Fender amp: the mic comes in a huge, tweed‑covered case with faux alligator-skin trim, and it is pretty heavy! The power supply accounts for some of this weight, but you also get a shockmount, a neat little pop screen that attaches to the mic, and a 15-foot Gotham multicore cable with Switchcraft connectors. A padded hardwood box, which slots into its own compartment in the case, keeps the mic extra safe, and there's room enough to store the necessary leads plus an XLR cable, without you requiring a degree in origami!

This mic has a retro‑style, cylindrical body and 'flying saucer' capsule housing, perched on a slender neck, and a metal trim made of polished nickel contrasts nicely with the cream paintwork. The compact pop-shield clamps firmly around the thin neck of the mic, using two thumb‑screws.

Despite its elegance, the mic is reassuringly 'normal'. There are two mini‑toggle switches on the body, one for a 10dB pad and the other for an 80Hz low‑cut filter (6dB/octave), and the polar-pattern control is provided by a pointer knob on the matching cream PSU case. There are nine patterns, covering figure‑of‑eight, various widths of cardioid, and omni. The PSU includes connectors for the multi‑pin mic cable and for a standard XLR output, and mains is on the usual IEC lead. Power‑on status is shown by a large blue jewel lamp. Dual voltage switching is available via a red slide switch, and a chunky toggle switch is used to turn the mic on.

Unscrewing the weighty locking ring at the mic's base reveals what appears to be a Chinese‑built chassis, housing glass‑fibre circuit boards and a hand-selected, Russian‑sourced 6072A tube, but this not just a re-branded Chinese mic. Final assembly is done in the US using high-quality capacitors and metal-film resistors, and a custom USA‑built Cinemag balancing transformer is located in the mic's base, just above the XLR exit point. The body has small vents on the rear to aid cooling. The capsule comprises a pair of back‑to‑back elements, 34mm in diameter and fitted with three micron, gold‑sputtered diaphragms. According to the designers, the capsule has been tuned to provide a rich-sounding tonality with an airy high end — but there's no frequency-response plot to indicate exactly how this is achieved.

The BV1 has been designed to be versatile, and the technical spec reveals the inevitable compromise between noise and high SPL handling. With the pad engaged, the mic can handle up to 144dB, which covers most eventualities, and the noise is below 18dB (A‑weighted). Tube mics are always a little noisier than equivalent solid-state models, though, and while this isn't an ultra‑quiet mic, noise still shouldn't be an issue in close-miking studio applications. A frequency response of 25Hz‑20kHz is quoted, but there's no mention of how many dBs down the response is at these extremes — and the figure on its own is pretty meaningless. (The standard way to quote frequency response is between the 3dB-down points.)

On vocals, with the BV1 set to cardioid mode, the high‑frequency response lends an airy openness to sonic detail and adds a touch of breathiness, but unless you go mad with compression it falls short of harshness or aggression. Vocals come across as very solid, without getting flabby at the low end, and seem closer‑sounding than with many other mics. This may be to do with the good mid‑range definition — but, whatever the reason, the BV1 does a great job of bringing vocals into focus, often with little or no subsequent EQ. Although there's clearly some degree of tube‑inspired flattery going on, this mic sounds subjectively honest enough that it should suit a sensibly wide range of male and female voice types. The pop shield worked reasonably well except on the most lively 'plosives', and the shockmount coped well enough, but required some enthusiastic tightening of the swivel‑mount thumbscrew to prevent drooping.

Although I'd say this is primarily a vocal mic, I like to try mics on a number of sources to see how versatile they could be for home-studio recordists. I'm happy to report that I obtained great results on acoustic guitar, and that the SPL handling is good enough to lend itself to a wide range of instrument recording applications. My guess is that in most studios the mic will be set to one of the cardioid patterns most of the time — as that still seems to be the norm for vocal recording — but the multiple polar patterns mean versatility, and the tonal consistency holds up well across the different patterns.

Although this model does cost more than a typical project‑studio tube mic, the BV1 is still relatively affordable and offers good value at the price, especially given that you get the sophisticated case, the 'boutique' Gotham cable and the included shockmount and pop shield. A number of professional engineers have already made encouraging comments about this microphone — and I can't say that I'm surprised, because my experiences with it suggest that many users will embrace it as a flexible and musical‑sounding vocal mic that can be pressed to other duties when required.

I can think of a few cardioid‑only alternatives that work well on vocals, such as the Rode K2, the SE Gemini MkII and the MXL Genesis, but when it comes to multi‑pattern tube mics in this price range there are also quite a few options, including the Harper‑Diabaté HDV1, The Studio Projects T3, the Sterling Audio ST69, the CAD Trion 8000, and the M‑Audio Sputnik. Also check out the Chameleon Labs TS2, the SE Z5600A and the AKG Perception 820.

The Avantone BV1 turns in a performance that's as impressive as its looks. Being a tube mic, it isn't ultra‑low noise but I didn't notice any obtrusive noise during my practical tests. Considering the quality of the mic and its accessories, the price is very attractive.