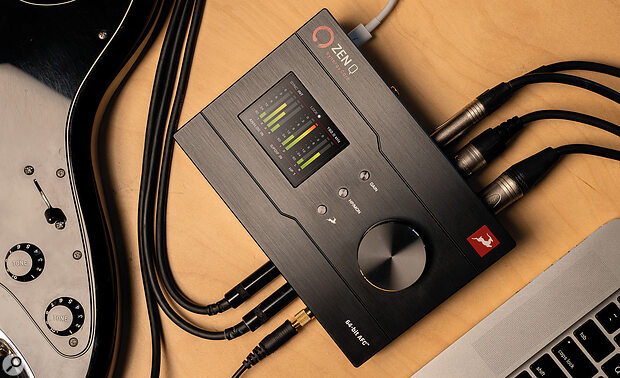 Antelope Audio have long been pioneers of the desktop audio interface, and perhaps have done more than any other manufacturer to establish the idea that ‘professional’ quality is not the exclusive province of the 19‑inch rack. We’ve already looked at the Synergy Core variants of the flagship Zen Tour and the minimalist Zen Go, and the new Zen Q Synergy Core occupies the middle ground between them. It’s available in separate Thunderbolt and USB variants, the latter of which was sent for review.

In order to get going, you need to create a user account at the Antelope Audio website and download the Antelope Launcher utility. In my case, this didn’t recognise the Zen Q straight away, and after some head‑scratching I figured out that it was necessary to update the ‘bundle versions’ from the System page. This was easy enough to do, but could perhaps be signposted a bit more clearly.

The wedge‑shaped form factor is familiar from the other Zens, and like the Zen Go, the Zen Q is a bus‑powered interface with no option to use a mains PSU. However, whereas the Zen Go has a second Type C USB port to allow an additional USB power source to be attached, the Zen Q has only one socket. If you do need additional power, a supplied ‘Y’ cable allows this to be connected to two Type A ports simultaneously.

In other departments, the Zen Q is more fully equipped than the Zen Go. It retains its smaller brother’s pair of combi jack/XLR inputs, but adds a second independent pair of quarter‑inch jacks for line input or DI guitar recording. On the digital front, the coaxial S/PDIF I/O is augmented by a single optical input for ADAT Lightpipe expansion. Output arrangements are similar to those of the Zen Go, with the main monitor outs still duplicated on one of the two headphone jacks, and a second independent headphone output also available, but the Zen Q adds an additional pair of line‑level outputs on jacks.

The Synergy Core appellation indicates that this interface includes Antelope’s latest hybrid DSP/FPGA audio processing engine. This can be used to set up low‑latency processing in the cue mix or record chain, and can also be employed at mixdown courtesy of Antelope’s AFX2DAW plug‑in. The nature of the design means that measuring the available processing ‘power’ is not straightforward, but there seems to be a lot more on offer here than with the Zen Go. Given that you get the same bundle of 37 AFX processors included for free, this seems to me a pretty good deal.

In many ways, the Zen Q Synergy Core seems to me to offer the best price‑to‑features ratio of all the units in the Zen catalogue.

In many ways, the Zen Q Synergy Core seems to me to offer the best price‑to‑features ratio of all the units in the Zen catalogue. With a potential input count of up to 14, it can be expanded to cater for multitrack drum recordings and live band sessions, yet it is compact enough to be genuinely portable. It has similarly impressive audio specifications to its siblings, but unlike the larger Zen Tour, it achieves them without requiring an external power supply. It uses the simplified mixer utility provided with the Zen Go rather than the Zen Tour’s more complex control panel, and for my money at least, any lost flexibility is more than made up with in speed and ease of use. You’re also not paying for dual connection formats or a largely redundant touchscreen, to cite two other Zen Tour features that I suspect don’t get used much. At the price, this is a strong competitor to the likes of UA’s Apollo Twin X, and I expect it to do very well.