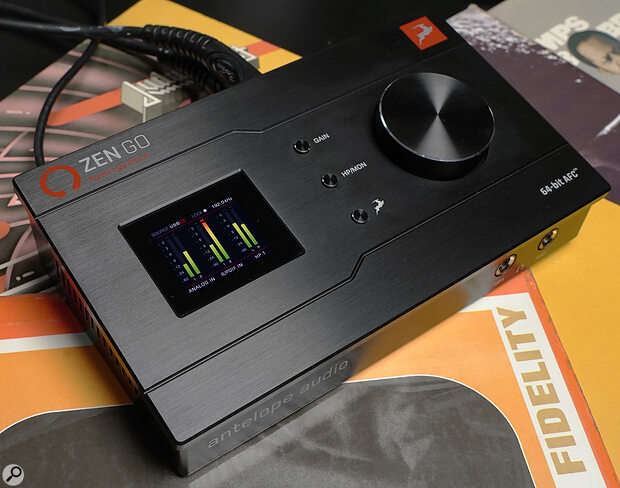 Antelope condense their considerable know‑how into an affordable, bus‑powered interface.

Innovation is an important part of Antelope Audio’s ethos, and they like to make the fruits of it as widely available as possible. Technologies such as Acoustically Focused Clocking and the Synergy Core processing engine thus aren’t limited to high‑end products like the Orion and Galaxy; they’re also featured in Antelope’s more affordable interfaces. It’s no surprise, then, to find that the new baby of their range is stuffed full of cutting‑edge wizardry.

The Zen Go SC looks like a scaled‑down version of the Zen Tour SC I reviewed in SOS November 2020, and offers a subset of the same connectivity. Whereas the Zen Tour provides four mic preamps and an additional four high‑impedance inputs, the Zen Go has just two ‘combi’ analogue inputs which fulfil both functions. On the output side, there’s a single main output pair which appears on balanced jacks, unbalanced phonos and on headphones, plus a second headphone output which is independently addressable. The Zen Tour’s talkback mic and optical digital sockets are not inherited by the Zen Go, and digital I/O is limited to coaxial S/PDIF in and out.

In truncated form, the Zen Go does retain the aforementioned Synergy Core, which implements a built‑in mixer and an extensive array of plug‑in‑style AFX processors, as well as the processing required for Antelope’s Edge modelling microphone system. One of the most appealing selling points of the Zen Go is that it comes with a much larger bundle of AFX processors than Antelope’s other interfaces, with no fewer than 37 different AFX supplied for free. The downside is that the Zen Go’s implementation of the Synergy Core is less powerful, meaning there is less scope for using a lot of these AFX simultaneously.

Most of Antelope’s other interfaces, including the Zen Tour, offer a choice of Thunderbolt or USB connection to the host computer. The Zen Go, however, is a USB‑only device. The Zen Go also does away with the Zen Tour’s external power supply, as it’s a bus‑powered interface. The limited power available over USB is a constraint on the design of audio interfaces, and the addition of the Synergy Core means the Zen Go is pushing the limits. Next to the Zen Go’s main Type‑C USB connector, therefore, you’ll find a second one, marked with a lightning flash that resembles the Thunderbolt logo. Although there’s no conventional mains PSU, this permits the Zen Go to be powered from a USB power pack or mains adaptor. Unlike the dual‑USB arrangement on Arturia’s Audiofuse, this is an either/or situation, meaning power is only ever drawn from one socket, not both.

Like the Zen Tour, the Zen Go is designed to sit on a tabletop, and presents a friendly user interface with a colour screen, three buttons and a rotary encoder with push action. These provide hands‑on control over monitor and headphone levels, preamp gain and mic/line/hi‑Z switching. The screen is rather small and is not touch‑sensitive, but I didn’t miss this feature, which is of limited value on the Zen Tour in any case. There’s no carry case supplied, but the unit itself is very solidly built, with no protruding pots or switches to break.

In comparing the Zen Go and the Zen Tour it should, of course, be borne in mind that the two interfaces occupy very different price brackets. The Zen Go is by far the most affordable interface in the Antelope range, and potentially brings the aforementioned new technologies to a whole new sector of the market.

The first step in using any Antelope interface on a Mac or PC is to install and run the Antelope Launcher utility. Sadly for those of us of a literal‑minded disposition, this does not propel any ruminants, but it does acknowledge the presence of any connected interfaces and allow the appropriate control panel to be opened. Firmware updates are also carried out here.

The control panel for Antelope’s larger interfaces involves a colourful virtual patchbay, with separate panes displaying virtual mixers and the AFX ‘rack’. As befits the more limited physical I/O on the Zen Go, the panel has been simplified, with no need for a routing matrix. Two 16‑channel mixers are available, one hard‑wired to the main outputs and the other to the second headphone output. The sources for these channels can be freely drawn from the two analogue inputs, up to eight DAW outputs (although there are eight DAW Play and Record channels visible in the Control Panel, the Zen Go presents 16 inputs and outputs to your DAW; Antelope described these as “buffer channels for additional expansion in future updates”), the S/PDIF ins, a pair of oscillators, and two ‘emulated mic’ inputs. This last option means you can connect an Edge mic to one of the analogue inputs and simultaneously monitor or record both dry and emulated signals; it’s also possible to ‘loop back’ computer‑generated sounds into your DAW for recording. The same source‑to‑channel assignments apply across both mixers, and each channel has a send to Antelope’s AuraVerb for ‘comfort reverb’.

In the Zen Tour and other larger interfaces, up to 32 channels of AFX processing are available, and the routing matrix gives you considerable freedom to apply them to inputs, DAW outputs or even other AFX channels. In the Zen Go, only the first four mixer channels have AFX slots, though these are not limited to hosting a single AFX. The default arrangement lets you apply AFX to the analogue inputs and the first pair of DAW outputs, but of course you could change this around at mixdown so as to have four AFX channels available as ‘hardware inserts’. The AFX2DAW plug‑in that allows AFX to be used directly within your DAW’s insert slots is not available at present, though Antelope are working on this.

The Zen Go boasts audio specifications that would be impressive for a mains‑powered interface.

There’s an element of compromise involved in the design of any small, portable interface, especially if you want it to be bus-powered, and I think that Antelope have made wise choices in this respect. The Zen Go boasts audio specifications that would be impressive for a mains‑powered interface, with an A‑weighted dynamic range of 120dB on the inputs and 127dB on the monitor outputs. Unusually, the latter can also generate a full +20dBu output level, which might be advantageous in a studio context. Low‑latency performance is about what you’d expect from a modern USB interface, with Reaper reporting a round‑trip latency of 5.5ms for a 32‑sample buffer size at 44.1kHz on my Mac.

In terms of features, the only real disappointment is the inclusion of stereo S/PDIF rather than optical ADAT, which would have made the Zen Go much more expandable. The decision to have one headphone socket mirror the main monitor outputs and the other be independent makes good sense, allowing different cue mixes to be generated for engineer and artist. The streamlined control panel is much more user‑friendly than the ‘full fat’ version you get with larger Antelope interfaces, and the front‑panel monitor and gain control are straightforward and effective.

If you’re looking for a portable, bus‑powered interface with uncompromising audio quality, your options are relatively few. And if you want that interface to incorporate mic modelling, preamp emulation and a vast range of vintage‑modelled effects and processors, the shortlist really comes down to this or UA’s Apollo Solo. In the Apollo’s favour, it connects using Thunderbolt rather than USB, and makes UA’s Powered Plug‑ins accessible directly within your DAW. However, the value equation favours the Zen Go, which is a fair bit cheaper and has slightly broader I/O options. If it’s true that competition is healthy, this sector of the market just went on an intensive fitness programme!

Antelope have distilled the core features of their Zen Tour into a portable, easy‑to‑use desktop interface.