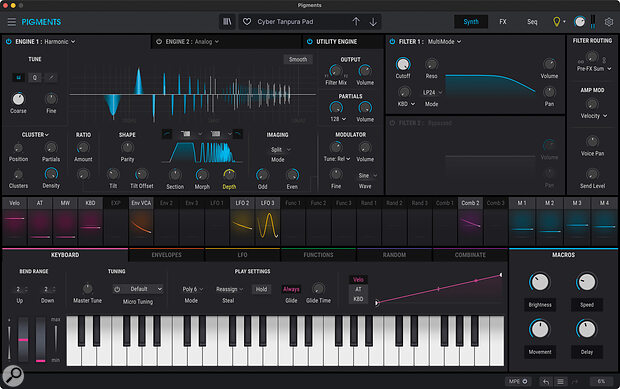 For the second time in as many years, Arturia have released a major update for their flagship software instrument. I reviewed the original Pigments in May 2019 and here we are, just over two years later, checking out Pigments 3. This is an interesting release strategy for a virtual instrument, where it’s more common to release major versions every three or four years. But will Arturia’s strategy of rapid‑fire free releases keep Pigments at the top?

Pigments is a departure for Arturia, who had previously focused on software recreations of famous synthesizers. By contrast, Pigments is completely new, embracing the advantages of digital, rather than emulating old analogue hardware. Upon its release, Pigments was a sophisticated wavetable and virtual analogue synth with dual multimode filters, flexible effects, a sequencer, a complex yet intuitive modulation system, and even MPE support. Pigments 2 added a granular sample engine to the list of oscillator types. It also improved upon the sequencer, and added some new effects and a Buchla‑style low‑pass gate filter.

Pigments’ core workflow and interface haven’t changed. There are two sound engines, which can be set to one of four modes: Analog, Wavetable, Sample and now Harmonic. These two engines are joined by the new ‘Utility Engine’, which allows you to beef up your sound with two noise sources and a flexible sub‑oscillator.

The three engines can be sent to two multimode filters in varying amounts. Along with the nine different filter types available already, Arturia have added their Jupiter 8 modelled filter from their Jup‑8 V plug‑in. The two filters can be routed in serial or parallel, or a mixture of both, before heading to the effects.

There are two insert effects busses and a send bus, which can each hold up to three effects. There are 18 effects from which to choose, four being new to Pigments 3; a pitch‑shifting delay, multiband compressor, Juno 6 modelled chorus (from their Jun‑6 V plug‑in), and a stereo flanger (from their Flanger BL‑20 plug‑in).

Modulation is a key element in Pigments. Modulation sources are grouped in tabs at the bottom of the page and applying modulation is simple and intuitive. A row of coloured preview windows show the current value of every modulation source, and clicking on one will allow you to fine‑tune its destination amounts.

Pigments 2 added a powerful sample oscillator which allows up to six samples to be imported and layered. The layers could be played back in a variety of ways such as round‑robin, velocity split, random or selected by modulation. They could also be individually tuned, looped and reversed. The granular mode added the ability for up to 256 grains with control over envelope shape, density, size, playback direction and some powerful randomisation options.

The sample engine took Pigments to new levels, with the ability to layer powerful wavetable and VA synthesis with an included sample library of acoustic instruments, Foley, field recordings, drums, special effects and, of course, your own collection.

The new presets that ship with Pigments 3 are packed with icy‑cold shifting timbres, futurist basses and experimental sequences which make great use of this new oscillator.

The new harmonic oscillator will be the main attraction for most people. The additive engine allows up to 512 partials to be generated. A spectrum graphic in the centre shows the partials, their frequency and gain, and updates in real time as you change parameters.

The new Harmonic Engine in all its glory.

There are plenty of ways to manipulate the partials. Odd and even harmonic balance, harmonics ratios, gain decay and partial panning all help give fluidity to the sound. There are dual formant filters too, which work within the harmonic oscillator. A dozen different formant filter shapes are available and once chosen you can morph between the two.

The stereo imaging section provides three ways to pan partials to give you anything from subtle to extreme stereo effects. The simplest option is to manually pan odd and even partials. Random mode moves individual partials around the stereo field randomly with control over the speed and amount. Lastly, Periodic panning applies a more predictable panning with periodic offsets to successive partials.

Mostly the functions I’ve described so far work on all partials as a group, but there are ways to alter specific partials in smaller groups. The Window function allows you to define a frequency range in which to alter gain and tuning, which means you can focus on specific partials to emphasise them. Similarly, Cluster lets you pick a few groups of partials and modify them. You can decide on the number of clusters, how many partials are in each, and their frequency ratios. Finally, Shepard mode can recreate Shepard Tones, the famous auditory illusion of an endlessly rising or falling frequency, by shifting partials within a group up or down to the position of the partial next to it.

The real power of the Harmonic Oscillator becomes apparent when you apply modulation. The new presets that ship with Pigments 3 are packed with icy‑cold shifting timbres, futurist basses and experimental sequences which make great use of this new oscillator.

Prior to version 3, Pigments was a two‑oscillator synth. Perhaps to celebrate its arrival at the magic number, Arturia has added a third Engine. Unlike the other two, this one is fixed and cannot be changed to a sample, VA, wavetable or additive alternative.

The new ‘Utility Engine’ offers a cornucopia of noise (a band name if ever I heard one), plus a handy sub‑oscillator.

The Utility Engine has three sub‑components: two noise sources and a sub‑oscillator. The noise sources are sample based and contain a library of stereo samples that include the usual suspects as well as more esoteric sources like digital glitches, tape hiss, vinyl crackle, Foley sounds and even some short transient samples.

Noise samples can be looped, tuned and filtered (simple high‑pass or low‑pass). They can also optionally respond to keyboard pitch. A random phase function adjusts the start point of the sample on each keypress to introduce some variety to the initial transient of your sound. It would have been nice to see a stereo‑width control as there seems to be no way to adjust some of the wider stereo samples beyond using the Stereo Pan effect in an effects slot further down the chain.

The sub‑oscillator section is fairly standard. You can choose from sine, triangle, sawtooth, reverse sawtooth and pulse waveforms. The pulse and triangle waveforms can be further shaped with the width control. The coarse tuning can extend up or down three octaves from the keyboard frequency. This section is missing the low‑pass and high‑pass filters from the noise sections, which would have been nice to have, but overall the sub‑oscillator is great for beefing up sounds, which is all one can reasonably expect from a sub‑oscillator.

The four new effects bring some excellent potential for sonic mangling. First up is the pitch‑shifting delay, which brings Eventide‑like crystal delays, unison thickening, demonic spiralling feedback delays and more. The delay can be set from 16ms to 2secs, or tempo‑sync’ed. Pitch‑shifting of +/‑24st can be applied within the feedback loop. Wide delays can be achieved using stereo pitch or time offsets. As well as the pitch‑shifting, an additional octave up or down can be applied per delay pass which allows for nice almost‑arpeggiated pitch patterns. Finally, a high‑ and low‑pass filter can be used in the feedback path to further shape the wet signal.

Also joining the ranks is a multiband compressor. Up to three bands can be specified, with flexible split frequencies. Expansion, compression and limiting are possible thanks to the wide range of ratios possible (from 0.25/1 to 101/1). Input gain, attack, and release controls are common to all bands but each band gets its own output gain, which means you can also use the compressor as a basic three‑band EQ.

The addition of a Juno‑style chorus should be a cause for celebration for all synth geeks. The Jun‑6 Chorus effect sounds excellent and can even improve upon the original by offering tempo‑sync’ed rate control. Finally, there’s the BL‑20 Flanger, an emulation of the ’70s Bel BF‑20. It offers everything you’d expect from a good flanger and, like the chorus, helps to elevate the effects section beyond just the bread‑and‑butter effects which are usually bundled with synthesizer plug‑ins.

It most definitely cements Pigments as a major player in the virtual synth market.

Although this release doesn’t represent a rebuilding, as major updates often do, it most definitely cements Pigments as a major player in the virtual synth market. My assessment of the first version back in May 2019 was that it was a pleasure to use and that it offered many of the tools that a sound designer might want in a wavetable synth. With versions 2 and 3, Pigments has become rather more than just a wavetable synth. Whereas I was comparing Pigments 1 to Xfer’s Serum or NI Massive, Pigments 3 is beginning to look more like Omnisphere, Dune or Alchemy by handling multiple synthesis types at once. Even amongst this crowd, additive synthesis is quite rare (Alchemy is the only one that tackles it head‑on and is sadly no longer available outside of Logic). So Pigments 3 offers something genuinely different.

Arturia’s approach to updates is quite interesting: regular major releases are free to existing users. It keeps Pigments in the news cycle, keeps the active user base high with enticing new features and presumably keeps the revenue rolling in with new customers. If it’s working as well as I think it is, I can imagine more companies adopting this approach. It seems to be a win for everybody.

ROLI’s Equator2 has many similarities to Pigments 3. It also offers VA, wavetable and granular sample synthesis. It doesn’t do additive but makes up for it in other features such as FM and six oscillator sources. If additive synthesis is the main appeal, then Native Instruments’ Razor, Image Line’s Harmor and AIR Music Technology’s Loom II might be worth investigating.

Arturia are, at a fairly impressive pace, turning Pigments into a powerhouse do‑it‑all synth giant. The new additive oscillator brings a large pallet of timbres to the mix and the other improvements make a great synth into an even better one.