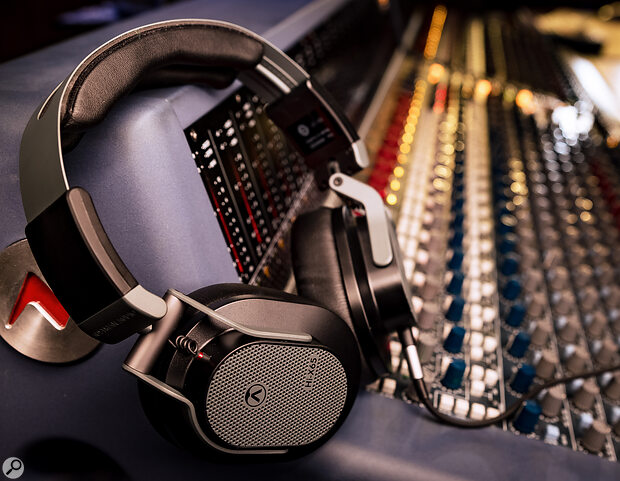 We put AA’s new open-backed mixing and mastering headphones to the test.

Anyone shopping for studio headphones today is spoiled for choice. Over the last 15 years, the quality bar has been raised repeatedly, placing reliable and trustworthy monitoring tools within everybody’s reach. Alternative technologies such as planar magnetic and Air Motion Transformer drivers have been developed to the point where they provide real competition for traditional moving‑coil designs. And when the limits of headphone design and manufacturing have been reached, software such as Sonarworks SoundID Reference (reviewed in this issue) and dSONIQ Realphones allows us to correct most of the remaining defects.

The ongoing popularity of headphones also means there are more manufacturers than ever, offering more different models at more different prices. Austrian Audio are recent entrants to the market, but with a design team comprising mainly ex‑AKG employees, they can draw on a rich well of knowledge and experience. Rather than exploring alternative technologies, Austrian Audio have sought ways to further improve the classic moving‑coil design. The result is the ‘high excursion’ driver which gives their headphones the Hi‑X designation. This helps to improve sensitivity levels without raising distortion levels, in theory delivering a cleaner sound.

Unlike many headphone manufacturers, AA have made the studio market their primary focus, and their Hi‑X50 and X55 closed‑back models have certainly established them as serious players. The third headphone model to use their high‑excursion driver is the Hi‑X65 under review. A circumaural design very similar in look, feel and overall size to the Hi‑X55, these new phones are the company’s first open‑backed model.

Given that they share a driver, you’d expect the Hi‑X65 to have very similar specifications to Austrian Audio’s existing models, and so it proves. The main difference is that the 65s are somewhat less sensitive, presumably reflecting the fact that sound from the rear of the drivers escapes into free air rather than being reflected back to the ear as would be the case in closed‑back phones. Despite this, they still achieve a sensitivity of 110dBSPL per Volt, and as their nominal impedance is only 25Ω, they have no problem at all generating a healthy output level from any amp.

The lack of internal reflections within the earcup is the main reason why open‑backed headphones typically have a cleaner sound than their closed‑back brethren, and thus why they are usually preferred for critical listening and mixing. That’s certainly a narrative that Austrian Audio have bought into with the Hi‑X65s, which are described as “a critical new tool for professional mixing and mastering”.

Like the other AA phones, the Hi‑X65s are very nicely made and comfortable to wear. They’re supplied in a stylish and robust cardboard box which holds them safely in foam cutouts, but is very large and a bit awkward; the phones themselves fold up quite small, but if you want to carry them around, your only other option is a soft bag that offers limited protection. A long and a short cable are supplied, attaching through locking mini‑jacks to the base of the left earcup.

Closed‑back headphones are often voiced in a way that emphasises the bass and the upper midrange, whereas open‑backed phones, in keeping with their ‘critical listening’ roles, tend to offer a response that is more subjectively neutral. Audio‑Technica’s open‑backed ATH‑R70x, for example, don’t share the treble boost and prominent bass found in their closed‑back ATH‑M50x.

Austrian Audio’s closed‑back phones also have a ‘smile curve’ response, but unlike Audio‑Technica, they’ve carried this over into their open‑back model, at least at the top end. To my ears, the Hi‑X65s have quite a pronounced treble lift above 5kHz or so; it’s smooth, and not obviously peaky or resonant, but definitely on the bright side of neutral as far as I’m concerned. That’s helpful when you need to notice fine detail such as low‑level clicks, hiss, bad edits and so on, but until you’re used to it, it might mislead you into thinking that sibilance or harshness is more of a problem than it really is.

They sound clean, they present the full frequency spectrum, they have a wide but not exaggerated soundstage...

As far as treble is concerned, the Hi‑X65s share a ‘family sound’ with the other two models, though they are perhaps a little cleaner owing to their open‑back design. The low end, however, is rather different. The bass is even and clear, but not particularly prominent, and if there’s a peak anywhere, it’s further up into the low midrange. This helped to thicken up the sound, but occasionally made some material sound a touch boxy in comparison with other phones.

After many years of testing and working on headphones, though, I’ve learned that my preferences don’t always translate to better mixes. I’m not always a fan of bright headphones, but as long as they reach a certain level of quality, the mixes I’ve done on them have been just as good (or bad) as mixes I’ve done on phones with a more restrained treble response. So, what’s important is that the Hi‑X65s easily reach that quality threshold. They sound clean, they present the full frequency spectrum, they have a wide but not exaggerated soundstage, and such character as they have is both attractive and easy to adapt one’s ears to.