Chairman At The Board: Recording The Soundtrack Of A Generation

“I believe both producing and engineering are about serving the artist’s needs to help them accomplish their goals,” writes Bill Schnee in his semi‑autobiographical book Chairman At The Board: Recording The Soundtrack Of A Generation, which is published by Backbeat Books (ISBN: 9781493056132) and available in hardcover print format or digital eBook. I say ‘semi‑autobiographical’ because the book finishes up with a couple of appendices (Technology and Music, and Personal Philosophy and Other Random Thoughts) offering some of Bill’s insights on recording and producing that are worth the price of admission on their own.

In five decades of a stellar career that earned him over 125 gold and platinum records and 11 Grammy nominations, Bill has indeed served the needs of an incomparable list of artists. 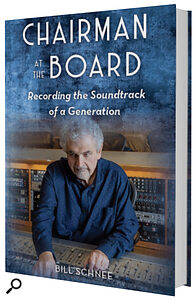 Like many of his industry contemporaries, Bill now lives in the Nashville area, but made his name at the heart of the thriving Los Angeles recording scene of the ’70s and ’80s, a period he describes as “the golden years — records were selling in big numbers, budgets were large, traditional songwriting was still very much king, bands were still recording together in the studio, the LA session scene was in full bloom, and computers hadn’t made their indelible mark on music.”

Chairman At The Board charts Bill’s progression from having his high‑school band signed and then dropped by Decca Records, moving on to “learning everything I could about making records” from recording legend Richie Podolor at his American Recording Studio, and then working for CBS, partnered with Richard Perry, engineering/mixing most of the famed music producer’s biggest albums of the ’70s and ’80s.

Along the way, Bill has accumulated a vast fund of behind‑the‑scenes studio stories that he tells with an engaging, warm humility, albeit peppered with moments of brutal, self‑deprecating honesty. There may not be quite as much audio engineering detail as some might like, but this is fundamentally a book about life at the centre of the best (and worst) practices and politics of the LA recording scene at its height.

Bill was kind enough to give Sound On Sound more of an insight into the gear of a typical late‑’70s LA studio session for a ‘Classic Tracks’ feature on Steely Dan’s Aja album (October 2020 issue: http://sosm.ag/classic-tracks-aja), for which he received one of his two Grammy awards.