Conversations With Women In Music Production 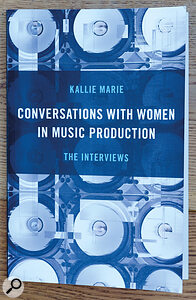 It’s obvious to anyone working in any aspect of pro audio that it’s still a very male‑dominated industry. Some areas employ a more even balance of men and women, of course (notably radio broadcasting), while others, such as traditional studio work, remain depressingly unbalanced. The reasons for this are complex and probably have origins stretching right back into pre‑school indoctrinations, but there are encouraging signs of gradual improvement, as more girls are studying STEM subjects and more female students enrol on music technology and related higher‑education courses. Young women generally now have greater confidence in choosing their own career paths, too, at least in the Western world, and there’s a little more awareness and support from male colleagues generally.

Nevertheless, it’s inherently difficult for any man to fully perceive and understand the real‑world challenges facing women trying to build a career in the industry. So I was delighted to be asked to review a new book, Conversations With Women In Music Production (Blackbeat books, ISBN 978‑1‑4930‑6506‑6), that explores this subject through interviews with genuinely successful female engineers and producers, each describing their first‑hand experiences as they’ve built their own careers. These interviews have been collated and transcribed by Kallie Marie, herself an acclaimed engineer/producer working mostly in America, and include contributions from Abhita Austin, Leslie MG Bird, Hilary Johnson, Sylvia Massey, Johnette Napolitano, Kerry Pompeo, Ebonie Smith, Andrea Yankovsky, and Kallie herself, of course. Spanning six chapters, the conversations cover gendered influences — such as the impact of ‘male arbiters of taste’, microaggressions, and soft sexism — the role and impact of women in music production, the way changing technology has democratised music production for women, and the barriers still faced by women and the obstacles yet to be overcome.

Everyone should absorb the substance of this book, but I would certainly recommend it for anyone involved in the hiring, management, or training.

To be perfectly honest, I didn’t find this the easiest of books to read and, needless to say, there are no pictures of big consoles and no discussions of the merits of the U87 versus C414. Instead, Kallie has given us a lot of words describing and explaining real‑world difficulties and injustices every woman currently faces in trying to build a career in the industry. Like most of us, I was aware of some of those issues and challenges, but a great many of the more subtle yet important ones were new to me and far from obvious, so I found the book both enlightening and thought‑provoking, and I genuinely learned much from it.

Of particular fascination was where the contributors’ views aligned and diverged; major issues for some were not perceived at all by others, and some employers (and, it must be said, musicians and artists) are clearly far more forward‑thinking and supportive than others. In other words, everyone’s experiences and challenges are different. This is as true for men as it is for women, of course, but it’s abundantly clear that women face legitimate difficulties that aren’t even recognised by many of their male colleagues.

Ideally, everyone should absorb the substance of this book, but I would certainly recommend it for anyone involved in the hiring, management, or training of women in pro audio to gain really valuable insights into an industry as viewed from an entirely different perspective.