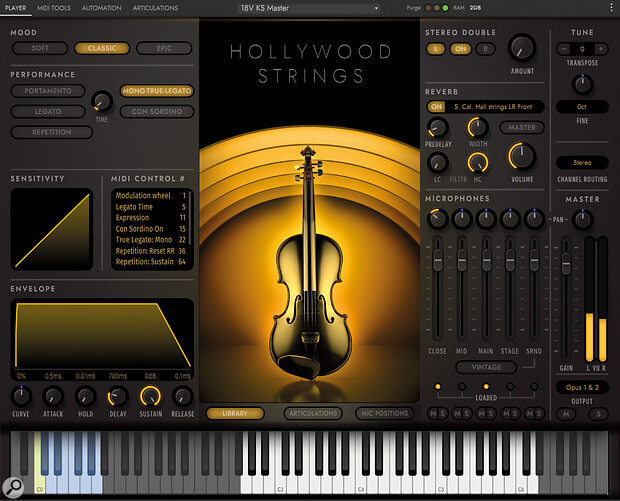 A significant breakthrough came with the appointment of Wolfgang Kundrus (developer of Cubase, Nuendo and PreSonus Studio One) as head of software development. Ex‑Native Instruments Eike Jonas and Wolfgang Schneider (developer of the ubiquitous Kontakt sampler) also joined the team, lured by Rogers’ promise of building a better software engine for the 21st Century. After the champagne corks had finished popping, this elite squad of software wranglers set to work and spent five years developing the new Opus engine.

All of HO Opus’ samples were recorded in EastWest Studio 1, former site of the legendary United Western Recorders. Acquired by Rogers in 2006, this historic facility has been extensively remodelled and now houses five hi‑tech studios. The musicians’ performances were captured from five mic positions, with an additional outrigger position adopted for the new recordings.

You can read in‑depth reviews of the original EWQL Hollywood titles on the SOS website, so rather than echo the comments of the highly opinionated writer, this review concentrates on the new instruments and features of the 2021 Hollywood Orchestra Opus Edition.

This ambitious, go‑for‑broke magnum opus represents over 10 years of work, sustained by a singular vision of bringing the classic Hollywood sound to the world’s sample users.

Spearheading the library’s new ensembles is a symphonic‑strength section of 18 first violins, designed to offer an alternative to Hollywood Strings’ 16 first violins. According to producer Nick Phoenix, “The 18 violins alone took one week to record. They have a different sound. The players are different. The vibrato is different — they work well with the existing collection or as a replacement for the original first violins. We wanted to be able to point to this and say, ‘This is what violins should be like.’”

HO Opus revives a venerable tradition by incorporating sections of three flutes, three clarinets and three bassoons, thereby replicating the woodwind ensemble format of early 1990s sample libraries — no ‘three oboes’ samples this time round, but I can’t say I miss them. The newly recorded woodwind trios were recorded as separate unison sections with an identical articulation menu.

If the new 18 violins seem a good bet for the ‘Best In Show’ award, these woodwinds must surely also be a contender. Benefiting from a pleasantly rounded tone and loud dynamics which are bright but never shrill, their sumptuous sound is a testament to Shawn Murphy’s engineering skill, while the fluidity of the legato patches reflects both the players’ musicianship and the producers’ technical experience. The flutes sound suitably lyrical, lilting and pastoral, the clarinets (played with no vibrato) have a sweet high end and when not clowning around with jocular staccato rhythm patterns, the bassoons can deliver poised and stately melodic themes.

A no‑frills style menu contains lovely sustains and distinctly articulated, accented and marcato performances which can serve as both long and short notes. I particularly enjoyed the flute section, whose playing is so tight it often feels like listening to one player rather than three. The woodwinds’ default opulent concert hall acoustic is ready to plug straight into your arrangements, but a more intimate sound can be achieved by soloing the close mics and turning off the reverb.

Producer Nick Phoenix says of HO Opus’ new brass instruments, “I have never found better French horns than we have in Hollywood Orchestra, so we chose to focus on doing all‑new two trombones and two trumpets. These new samples are comprehensive and all about extreme dynamics, comprehensive articulations and precision.” True to his word, Rogers and Phoenix procured some commanding performances from their star trumpet players. Their searing, steady and true loud sustains are positively ear‑splitting, while the soft, mournful and reflective tone of their quiet long notes and muted samples sounds tender and touching. There’s also a good selection of well‑played short notes you can use for programming fanfare‑like figures and accents.

The trombone duo’s versatile articulation menu spans a tonal spectrum from mellow brass‑band‑like timbres to raspy, in‑your‑face deliveries. In the latter camp are rude, jeering flutter‑tongue performances and some great rousing rips which throw orchestral decorum out of the window. Short pumping staccatissimos are ideal for powering rhythm passages, while excellent, tightly played 16th‑note repetitions perfectly match the 18 violins’ version. Played crescendos are also a source of instant orchestral drama, but if you’re looking for something more leftfield, the trombones’ descending clusters and despairing pitch falls create a decidedly strange and quizzical atmosphere.

All the new instruments have a ‘Shorts Mod Speed’ patch which allows the modwheel to select note length, and every instrument in the library (percussion excepted) now has a Keyswitch Master patch containing all of its available articulations. No new material was recorded for the included Hollywood Orchestral Percussion and Hollywood Solo Instruments collections, which leaves the percussion still lacking taiko drums. However, the makers did fix the celeste’s endlessly ringing notes which I moaned about in the original review.

In a general push to clean up and tighten the original libraries contained in HO Opus the makers reprogrammed many instruments, paying particular attention to the woodwinds and solo instruments. Clunky names such as ‘1st Violins 1 NV NV NV VB RR Ni DIV A’ are now replaced by something more comprehensible, and many patches have a ‘lite’ option which omits half of the dynamic and vibrato layers, thus reducing the burden on less powerful computing systems.

All this makes the library considerably easier to use than its predecessor. The only minor flaws I found occurred in two ‘legato slur’ patches: a faulty transition from high B up to C in the three clarinets’ extreme high register, and a similar issue in the two trumpets’ legatos affecting every interval from bottom E3 up as far as F4, and every interval from high D6 down to C5. EastWest have now fixed both bugs and posted an instrument update in their Installation Centre.

Despite its extensively rewritten software, Opus appears on the surface to be Play on steroids. The graphics are bolder, brighter and more eye‑catching and change colour like a chameleon when you change ‘mood’ (see below), but the front panel is closely modelled on Play’s layout, with arcane details like the ‘Stereo Double’ effect faithfully preserved. 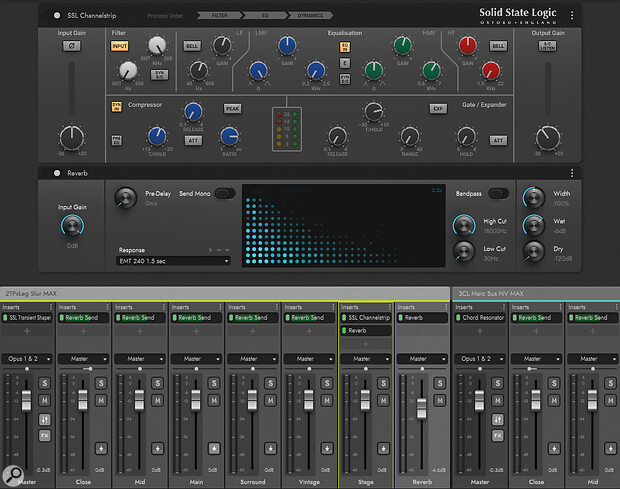 It’s only when you play (no pun intended) the instruments that you realise the resemblance is only skin deep. The new player loads patches in double‑quick time, with even the largest orchestral templates ready to rock after just a few seconds. You can audition patches by clicking their names in the browser, create your own keyswitches and articulation sets, and unload patches and mic positions you don’t need.

Opus allows you to load multiple patches into an instrument rack and assign each one its own MIDI channel. All loaded instruments are displayed in the built‑in mixer, whose large range of effects includes a handsome‑sounding convolution reverb and an SSL channel strip. The so‑called ‘moods’ are presets which load different mic positions and reverb types to give you a choice of standard (‘classic’), subdued (‘soft’) and bright (‘epic’) tonal settings. Also on board is a suite of MIDI tools including an arpeggiator, chord generator, pitch glide, MIDI echo and MIDI file recorder.

HO Opus’ built‑in Orchestrator was developed in conjunction with Sonuscore, musical brains behind the libraries Action Strings and The Orchestra. I have to say right off the bat that this thing is brilliant. It uses all the instruments in the library to create real‑time arrangements based on your MIDI input, and can produce amazing results from a few simple chords. 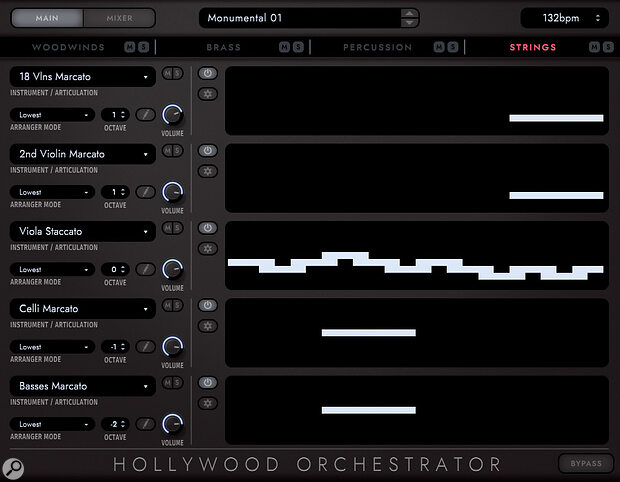 The Orchestrator’s 500+ presets are divided into three categories. ‘Ensembles’ are 250 basic instrumental combinations you can play in real time: a quick way of grabbing (say) a full strings, brass or woodwinds staccato section which saves you the chore of creating such templates yourself. The combos incorporate a customisable auto‑arranger which assigns specific chord notes to different instruments. ‘Ostinatos’ are nicely written, full orchestral arrangements of the familiar propulsive rhythm patterns on which media composers’ livelihoods apparently depend. Tempo‑sync’ed and played in various rhythmic subdivisions, you can mix, match, solo or mute their individual parts to your heart’s content.

‘Scores’ blew my mind. Having loaded the ‘Infinity 01’ preset and played a random chord, I was bowled over by the noise erupting from my speakers; a riot of symphonic colour comprising a vivacious dancing strings figure, counter‑rhythmic harp harmonics, insistent clarinet triplets topped by darting flute interjections, trumping trombone and tuba quarter notes, off‑beat horns and martial‑sounding trumpet clusters. For a moment I thought my computer had switched to a YouTube clip of the BBC’s Celebrating John Williams Prom.

Rejoicing in names such as ‘Black Knight’, ‘Superhero’, ‘Hollywood Adventure’ and ‘Elves’ World’, these exciting, fully orchestrated scores recreate the styles of classic Hollywood film music. (Mercifully, no elves were harmed in the making of these pieces.) No time‑stretching is involved: the Orchestrator scoring engine’s arranger mode modifies your MIDI input using various note‑selection processes, then uses a step sequencer to turn those generated notes into programmed rhythms and arpeggios. Since the created patterns trigger instruments using real‑time MIDI data, you can drastically alter tempo without affecting the samples’ pitch or sound quality.

If you want to dig deeper, you can switch patches and solo individual parts: a valuable educational experience. You can also use the built‑in Sequence Editor to modify patterns and record the created MIDI sequences into your DAW so they can trigger other instruments in your project. Amazing stuff. I’m still gobsmacked that playing a simple three‑note chord can create such a full‑on musical experience, and congratulate the team who devised this ingenious tool. 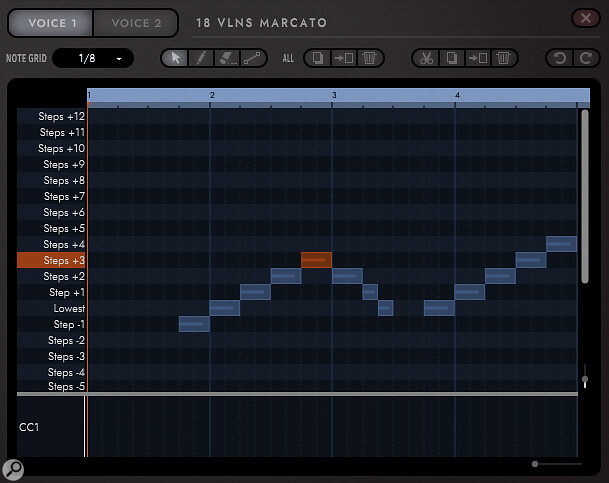 The Orchestrator’s sequence editor allows you to edit the created patterns.

Announced in May 2020, HO Opus was delayed and finally emerged on April 20th this year, by which time the mood of some EastWest followers had turned mutinous. There were extenuating factors: organising a massive 944GB sound library is clearly no stroll in the park, and when you factor in a global pandemic, schedules tend to go out of the window. Nevertheless, I’m reminded of the words of another orchestral developer regarding product releases: “Announce when it’s ready, and everyone will be happy!”

Happily, buyers can now get their hands on these premium instruments, which are unarguably in the top drawer of orchestral samples. Spruced up, powered by an efficient new player and boosted by a fabulous real‑time orchestrator, Hollywood Orchestra Opus Edition should give its users pleasure for years to come.

It’s been a long haul — this ambitious, go‑for‑broke magnum opus represents over 10 years of work, sustained by a singular vision of bringing the classic Hollywood sound to the world’s sample users. Having followed its progress from the outset, it’s satisfying to see that goal finally achieved. Laden with its cargo of treasures, EastWest’s flagship orchestral library sails on.

While the Gold and Diamond versions both contain all the original and new expansion instruments, Gold contains fewer microphone positions, jettisons the Hollywood Strings ‘Divisi A/B’ samples and also omits its ‘bow change legato’ articulation, deemed to be too resource‑heavy for less powerful computers. Here are the stats:

You can no longer buy the former Hollywood Strings, Brass and so on, and the original versions of Hollywood Orchestra and the three Hollywood solo instruments were withdrawn on the day HO Opus Edition was released. For new buyers looking to connect with EastWest’s fabled Hollywood orchestral range, this means that the new Opus collection is the only game in town.

The jewel in the crown of the long‑running EastWest/Quantum Leap sample‑production enterprise, Hollywood Orchestra Opus Edition brings together extensively revamped versions of the Hollywood orchestral libraries, adds new instruments and packages the whole shebang in a sleek new player with lightning‑fast load times. The included Hollywood Orchestrator is a fabulously entertaining extra with great educational potential.