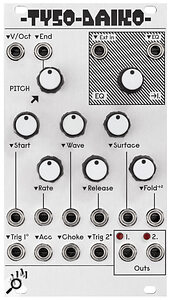 ALM/Busy Circuits Tyso Daiko: 14HP, +12V 70mA, -12V 35mA.I believe modules like this should offer quick results and reward blind experimentation, but at the same time challenge users to expand their knowledge and figure out what it actually is they want from their patches. The Tyso Daiko absolutely does this. It’s a good idea to have a basic idea of how drum synthesis works before diving straight in, but once the fundamentals are in place (for example its three knobs dedicated to its pitch behaviour), it’s hard to go wrong. From here it’s simply a case of experimenting with its various parameters (all CV-controllable) such as the waveform selector, ‘Surface’, release envelope, EQ and so on, either to get that sound exactly where you want it or to upend it until it’s nothing like what you were initially going for. The latter is certainly the more fun.

The Wave knob at first cycles through noise, sine, triangle, saw and pulse waves, and when used melodically in conjunction with the V/oct frequency input (and with no sliding frequency set by the Rate knob) can assume a bass, lead line or just about anything you need a simple oscillator to be. After these options come more complex wavetable sounds: ‘voice’, two different FM-style bell sounds, cymbal, spectra and buzz. My first thought was that I’d prefer this knob to be stepped, or even a button for easier navigation, but after experimenting with CV control for even a short time I realised that careful positioning of the wave knob within its cycle of options is key. It responded well to stepped voltages, landing comfortably on a different ‘drum’ of the ‘kit’ with each step of my sequencer, but also to continuous voltages where it would slide through various sounds and produce quite wonderful results. From its melodic capabilities to the potential for swirling, guttural noisescapes — and everything in between — suffice to say it’s almost a disservice to simply call the Tyso Daiko a drum module.

One major point of departure from both the Dinky’s Taiko and Akemie’s Taiko are the Tyso Daiko’s dual trigger inputs and outputs. At first glance I thought it simply gave the option for mono or stereo, which would be nice but not particularly exciting. This it does, but in fact the dual inputs and outputs are a large part what makes the Tyso Daiko such an exciting and creative module. In actuality the two inputs and outputs work together to facilitate a type of pseudo two-voice module. Both voices follow the same signal path until they diverge at the last stage — I say ‘pseudo’ because I found it more helpful to think of it more as one voice but with two trigger inputs, which is then split in two at the other end. Voice 1 is fed through an analogue tilt EQ for frequency management with broad strokes: any setting below 12 o’clock on its corresponding knob will emphasise its high frequencies, while anything above 12 o’clock will emphasise the lows. Voice 2, meanwhile, is fed though the secret weapon that is a digital wavefolder, which can shape or mangle what was once identical to voice 1 to a point where it becomes a different instrument entirely. A kick and snare-style dialogue (to use that most basic illustration) is achievable with ease. The EQ section also has an external input, useful not only for homogenising the Tyso Daiko with another signal from elsewhere in your system, but also for routing both of its voices through one holistic filter and output.

Therein is one of the masterstrokes of the Tyso Daiko: its capability of achieving maximum results with minimal work. The Choke and Accent inputs similarly demonstrate this: Accent, upon receiving a high gate, will halve the release time of voice 1 and double that of voice 2 — in other words, now one will make way for the other. Choke only applies to voice 1: upon receiving a trigger it will cut its output until the next time it receives a trigger. Not only does this further allow the two voices to play off each other instead of simply alongside or over each other, I found myself creating complex polyrhythms by sending various quick gates to this input, even while my fundamental trigger was still a simple pulse.

The Tyso Daiko is fantastic. It presents a sophisticated palette of drum synthesis excellence while keeping the crucial element of fun completely intact.

You probably don’t need me to tell you that careful pitch programming is key to creating punchy electronic drum sounds. The Tyso Daiko’s Rate parameter, which dictates the speed at which the starting frequency will slide to the fundamental frequency, is yet another example of maximum functionality with minimal effort. There is an audible step between its initial ‘off’ setting to its slowest slide, but this doesn’t particularly matter. Here’s where it gets interesting: if the rate time is set to be shorter than the envelope time, it will cycle. At slower speeds this is tantamount to a delay effect, but it can also go as fast as audio rate, meaning that the Tyso Daiko can also create — drum roll — FM-style sounds! I found it a lot of fun to patch one sequence into the V/oct input and a totally different sequence of control voltages into the Rate input, achieving wild movement within my patterns without so much as touching the Choke or Accent inputs. On that note, I have to say the lower row of inputs could perhaps be laid out more logically (Choke only affects input 1 yet is next to input 2, for example), but once accustomed to the Tyso Daiko’s faceplate it wasn’t difficult to get a good workflow going.

As I said: the Tyso Daiko is fantastic. It presents a sophisticated palette of drum synthesis excellence while keeping the crucial element of fun completely intact; one small parameter change might reveal characteristics you never knew were there and open up worlds of sonic possibility. With such a playground at your fingertips, your biggest challenge may simply be knowing when to stop.