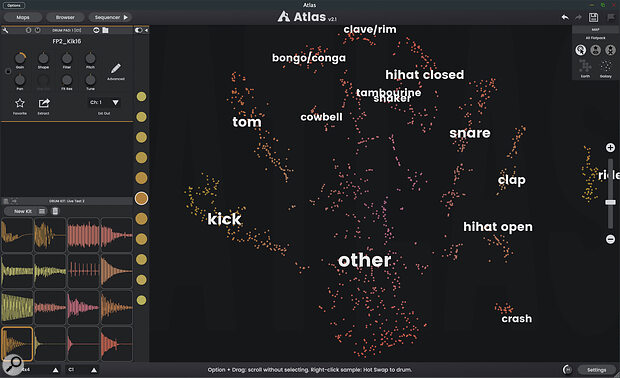 What do you get when you cross a drum machine with a librarian and a cartographer?

I have a drum sample collection that’s built up over the years. Although the DAWs and drum machines I use have brilliant pre‑built kits, I like the idea of using my own sounds. My collection mostly arose from a side‑hustle of developing commercial sound libraries for Reason and Live. Whether building sound packs or making music, one thing that I’ve found a difficult and uninspiring process is assembling kits from a big list of samples, even samples that are neatly foldered and named.

Atlas offers a unique way to organise, browse and audition your drum samples, using intelligent analysis to associate sounds by type and timbre, and then representing them visually as a map. It quickly became apparent that this is worth the price of admission on its own, but Atlas also includes a drum machine and step sequencer, combining everything you need to build and shape kits and create patterns. Atlas can run both standalone or as a plug‑in in your DAW.

The Atlas window is dominated by what looks like a pixelated world map of colourful dots, with continents labelled by drum sound types. The first time you launch Atlas, this sound world is the factory map representing a drum sample collection provided by Algonaut. I decided to jump right in and start my own map.

A new map simply needs you to point Atlas at one or more folders which contain samples. These don’t need to be neatly sorted and they can have other non‑audio files in. The sounds do need to be drums or one‑shots; I found loops and longer melodic samples get ignored. You click Build and the Algonaut AI goes to work. The one‑time analysis took a few seconds with some of my single pack trials, or a couple of minutes when I threw in the whole NI Maschine factory drum library.

The resulting visual map starts off in World view, which clumps sounds together into larger tokens. If you zoom in, or switch to Galaxy view you can see every individual sample. Samples with similar sounds are closer together, and clustered into types, using traditional drum machine naming (Kick, Snare and so on), plus ‘Other’ for all additional one‑shots that don’t obviously fit in. There’s an option to use file names as a hint, but by default the AI makes its assessment from the waveforms.

Clicking on sounds auditions them, but I mostly kept ‘Trigger on Hover’ mode on, where you can simply roll your mouse across the map and audition everything you touch. The results are pretty remarkable, and fascinating. Sound categorisation is very accurate, but even when it’s not I enjoyed the happy accidents. Like sounds do clump together and you get occasional strings of sounds that morph across to other galactic arms. It’s incredibly quick to home in on a sound that’s right for your current project or kit.

Atlas can reveal hidden gems and sound associations in your sample archives that you may have never noticed.

Sounds can be dragged from the map directly out to your DAW, but you can also use the onboard kit builder to assemble and play your samples. Either way, the process is completely transformed compared to the old way of diving through folders and auditioning lists of files called things like ‘Clap67.wav’. Finding sounds that work well together becomes trivial, and fun. The only thing I would have liked would have been if it could intelligently match open and closed hi‑hat sounds.

I initially dismissed the New Kit function, which instantly generates a kit of ‘random’ sounds. I later discovered it’s not as random as all that. The pads are categorised according to various schemes (and grid sizes), so you’ll get sounds by type in templated positions. What’s more, you can lock pads with sounds that you like and then run the randomiser. I enjoyed finding and locking in the key sounds: kick, snare, hats and a couple of signature hits or needle drops, then letting Atlas fill in the rest for me. You can then continue locking stuff you like and rolling the dice again until you’re happy.

Sounds on the kit pads can be adjusted and shaped in various ways that you’d expect from a drum sampler. You can adjust the pitch, apply a simple or advanced envelope, add filtering, etc. These are only relevant if you are going to use the sounds directly from Atlas: if you drag the sound out to another app these parameters are not rendered. 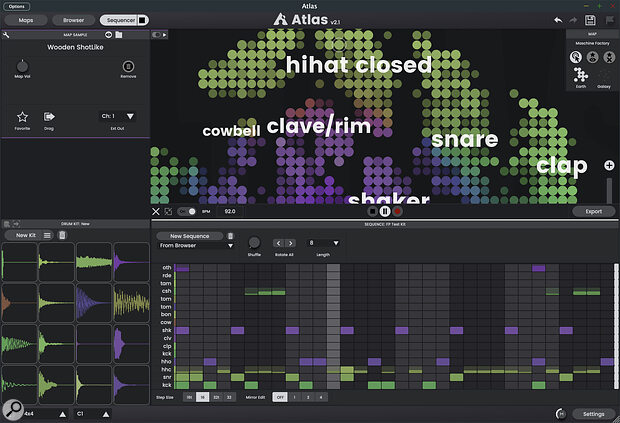 An onboard step sequencer can be used to build beats right inside the plug‑in.

For the most part I like working with the hybrid hardware/software drum sequencing workflows in Live/Push or Maschine rather than a drum machine plug‑in. However, Atlas 2 does work as a drum instrument in its own right if you need it to. (It would have been useful for me in Pro Tools but there’s no AAX version). The drum kit section responds to MIDI, and the grid can be configured to align with different 4x4, 8x8, 1x8 or 2x8 pad controllers. Several other functions of the plug‑in/app can be mapped to MIDI messages.

There’s also an onboard step sequencer, which can operate independently or sync with your DAW. This supports both mouse input and live recording from MIDI, quantised to the grid. The sequence can be up to 64 steps long and individual lanes can have separate lengths. Velocity can be captured or drawn in. There’s Shuffle, and the always‑handy Nudge function, but otherwise it’s pretty straightforward. 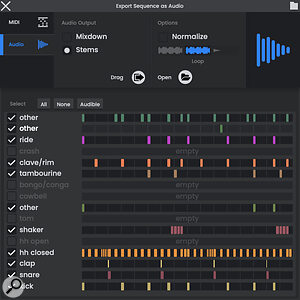 Loops can be exported as MIDI or audio, either as split components or a full mix.

A kit and sequence can be saved into the Atlas library as a self contained ‘Loop’. Within the Browser the elements of a Loop (kit, sequence, individual samples and sequence lanes) are all visible and can be dropped into the current working area to swap out parts of whatever is currently happening. You can also export the Loop as a full mixdown, individually rendered drum channels, or a MIDI sequence. When running the plug‑in, these elements can be dragged out into your DAW.

I know many people like to work in the way I’ve described, creating loops and bouncing them out into their projects. One nice thing is that the Browser is common to the standalone app and any instance of the plug‑in, so loops you’ve been working on will be available wherever you use Atlas.

I usually prefer to create a few pattern variations, then create an arrangement by triggering them on the fly. Atlas doesn’t support multiple patterns, unless you save out your Loop multiple times and drag variations from the Browser. That’s fine! I was more than happy to use the sample browsing and kit building features and then drag the sounds out onto the pads of a Live Drum Rack or Maschine Group. I could have also dragged multiple audio clips out to slots in Live’s Session page or Maschine’s Ideas view.

However, I stubbornly decided to try to find a best‑of‑both approach, using the standard sequencing in Push or Maschine but live‑triggering Atlas. This turned out to be possible with a bit of tweaking. In Live you can use a Drum Rack to trigger Atlas on a separate track, or even better, run Atlas in one cell of a Drum Rack and use the External Instrument on the other pads to route MIDI to it. In Maschine I was able to run Atlas on pad 16 of a bank, and route the other channels to it. In both cases you need to transpose each channel to target the right pad, so you’d want to save this config rather than do it every time! Atlas supports multiple outs, so when running as a drum machine the separate samples can route to different audio tracks if you like. A really nice touch is that you can embed the sample data in the DAW project (in the plug‑in’s own recall settings) to avoid the dreaded ‘Missing Samples’ errors down the road.

If you find yourself auditioning your way through folders of generically named drum samples, there’s a better way. As well as getting you much better and faster results, Atlas can reveal hidden gems and sound associations in your sample archives that you may have never noticed. If you’re a sample pack developer it’s an essential tool for turning your raw materials into finished kits. As a bonus, it also stands in as a playable drum machine plug‑in and sequencer.

The sample packs provided by Algonaut can be accessed remotely as Cloud Packs. When you use these, Atlas grabs a low‑quality preview for near‑instant auditioning or kit loading. You can later choose to download the full‑quality versions as you need them. The included packs are a mixture of Algonaut content and user‑submitted packs. If you’re feeling community spirited, you can make your own pack and submit it for sharing. Unfortunately, you can’t keep your own sample content on the cloud; perhaps this could be a future premium service?

Atlas will make you fall back in love with your drum samples.